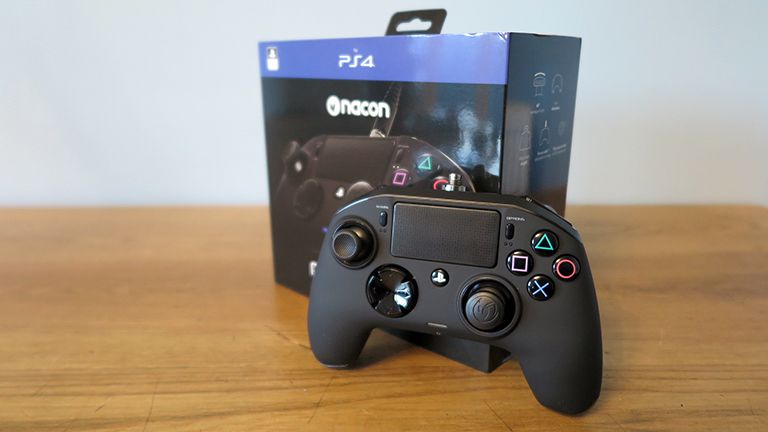 If your pockets are deep enough, and your gaming skill high enough, then this is the best PS4 controller you can buy

Holding cost against quality is always a difficult thing to judge when reviewing a product. After all, with increased expenditure you often get increased quality. It's not a sure bet that pays out 100 per cent of the time, however, more often than not if you buy a product that is worth three times that of a competitor, you'll likely get added functionality, better build quality and/or longevity - the latter benefit aptly summed up in the Captain Samuel Vimes 'Boots' theory of economics.

Nacon Sony PlayStation 4...
Amazon
£79
View
We check over 130 million products every day for the best prices

The problem comes when you start to factor in softer, fuzzier, subjective metrics like value for money and suitability. Just because a Ferrari (let's say this one as it's humana humana) is better built and quicker than a Ford Focus doesn't mean that it is more suitable to everybody looking to buy a car or better value for money. Even if you could afford the Ferrari, taking cost consideration out of the equation, do you necessarily need it and, for the reviewer, do you score it higher than a less technically impressive machine that costs less?

Which, in a long way round, brings us on to the Nacon PlayStation 4 Revolution Pro Controller, a PS4 gamepad that rings in at anywhere between £85.99 to £94.99 at retail right now, literally costing twice the price of the new Sony PlayStation DualShock 4 controller. You can literally have two fantastic controllers for your PS4 system for the price of one of these Revolution Pros.

This fact, of course, raises the question of why you would choose the Pro. After some intensive testing with T3's press unit, we can can confirm that there definitely are reasons to pick up one of these Pro controllers, however let's be clear that there are shades of grey to our recommendation, all of which we will come to very soon. Before we get to that, however, firstly let's take a look at what you get for your money.

We've got our own breakdown below, however why not first watch Sony's glossy promo video as a warm up:

What's in the box

The Nacon Revolution Pro comes in a compact black box with glossy sleeve surround. Remove the sleeve by unpicking the four sticky tapes on the top and bottom and you are presented with the black box itself, which is matte and features a front opening twin-door emblazoned with the Nacon cobra.

Remove the controller from its recess, and then the recess itself, and you are presented with an undertray of extra materials. These include the Revolution Pro's braided cable and tie, selection of controller weights with weight insertion/removal tool, silky controller carry bag and cleaning cloth, plastic cable port protector shroud, controller manual and a selection of Nacon stickers.

Pick up the Nacon Revolution Pro and the first thing you notice is how soft it feels in the hand. There's some super fine, mellow, rubberisation going on here and it just feels lovely - holding the controller for any length of time is a great experience. Aesthetically too, the Pro just looks dynamite, resembling a hybrid between the redesigned Xbox One S controller and the new DualShock 4.

After that you notice how light the controller is as stock, without any of its included weights installed, and then proceed to explore just how you go about bulking it if required. Weights are added to Pro via openable cavities in the end of each hand grip. The included weight installation tool acts like one of those old coin battery door openers, slotting in and allowing rotation and removal of each weight-holding barrel (the insertion holes can be seen in the photo below).

Weights come in a variety of sizes, ranging from 10 grams up to 17 grams, and can be mixed and matched to a degree for a customised feel. They don't have to be symmetrically layed out either, with one grip capable of being heavier than the other.

Weights installed (we like a heavy controller here at T3 Towers) you can then take in the design and button layout up close. On the left hand side you have a tradition thumb stick with an indented, concave thumb rest, as well as a 8-way D-pad. The D-pad features extra large, angled wings that allow for super easy viewless finger orientation and control. Slightly to the right of the left-hand thumbstick resides a PlayStation 'Share' button.

In the centre of the controller you have a power LED, PlayStation 'Home' button, a TouchPad with engraved PlayStation Pictos, as well as the controller's 3.5mm headset jack (mounted bottom centre) and its micro five-pin connection port (mounted top centre).

Moving over to the right you get the Revolution Pro's much-lauded convex right thumbstick, which has its amplitude and height enhanced to increase accuracy and precision during use. It has a larger head too when compared to the left stick, with the size increase helping to maintain accuracy also. Surrounding this stick is a backlight halo LED, which glows dependent on which of the controller's modes the player is using.

Finally for the front of the controller you have the traditional triangle, circle, cross and square buttons, as well as a PlayStation 'Options' button.

Moving on to the top and rear of the controller, you have a brace of shoulder triggers and buttons in the R1/R2/L1/L2 configuration, as well as a four additional macro buttons that can be mapped via the controller's app as desired. A mode selector switch and profile button complete the package.

Attaching the 5-pin, braided controller cable to the Revolution Pro's port is straight forward, requiring you to plug in and then secure with a screw cap. The other end of the cable is, of course, USB and plugs directly into the PS4.

Well, first off if you weren't used to using a cabled controller with your PS4 then you'll soon find yourself in unfamiliar territory. The length of the cable, coming in at a large 3 meters, does however make it easy to remain a good distance away from your screen and on a comfy sofa. The braiding on the cable, as well as its connectors, just scream premium too.

With the controller customised for weight, connected up and powered on, with the halo LED and power light on the Revolution Pro glowing, it was definitely time to get some gaming on to really put the peripheral through its paces. These were the titles that we played:

And the result, despite varying between titles, was overall impressive. There was a smoothness to the controller's operation that really told, especially in faster paced games. First person shooters and action games specifically, such as Doom and Dishonored 2, were noticeably easier to play when you got used to the Pro Revolution, with the nicely-judged short travel on the shoulder triggers and super refined thumbstick play (specifically the all important aiming right stick) allowing team T3, who are far from Pro-level gamers, to attain a higher level of aiming accuracy.

Did we notice improvements in all titles? No, we certainly did not, however we did notice an enhanced ease of use and accuracy in more games than not.

Of course, a large part of the target demographic for the Revolution Pro is professional gamers, playing competitive games online, so it makes sense that the lag-free cabled input, along with the super accurate sticks and buttons would be high-up on its mandatory list. However, one of the main reservations we had going into this review was whether or not normal, non-elite players, would get any benefit from the controller - so it was pleasing to see that the stick not only was more accurate on the specs sheet, but actually felt more accurate in the hands.

No, overall using the Revolution Pro was a very pleasing experience - it feels great in the hand, delivers excellent hardware specs and neat extras like being able to customise modes and macros add a level of sheen that even the very good DualShock 4 does not. In that regard it is definitely a better controller to use. But, well, there's definitely some buts...

Excuse us while we caveat

It's really hard to get away from the fact that while you get improvements, both in functionality and feature set, you have to make serious compromises on both connectivity options and cost to get it. We get why this controller is wired only, as a connection over cable is the only way to guarantee a stable, lag-free connection in a tournament environment, however, as non pro-gamers, ones who have a brace of wireless-enabled new DualShock 4's sitting right there next to our PS4s, controllers that in T3 Towers or our homes work great and almost never demonstrate signs of lag, we're unsure whether we'd go out and drop close to £90 on the Revolution Pro.

It comes back to the point we raised right at the start of this review - how suitable is the product for the customer considering its cost. We think that if you play a lot of video games, and specifically if you do so in a competitive, pro-gamer environment, then the Revolution Pro is the best PS4 gamepad in the world right now. It offers you unparalleled levels of accuracy and performance. However, if you're just a gamer or casual player, then it really is hard to justify the controller's purchase at this price.

We guess, then, you need to ask yourself just how much benefit you feel you will get from a piece of hardware like this. There's no doubting its quality, like a Ferrari supercar - but do you have the quality to justify its purchase?

For more information about the Revolution Pro Controller then check out Nacon's official website.