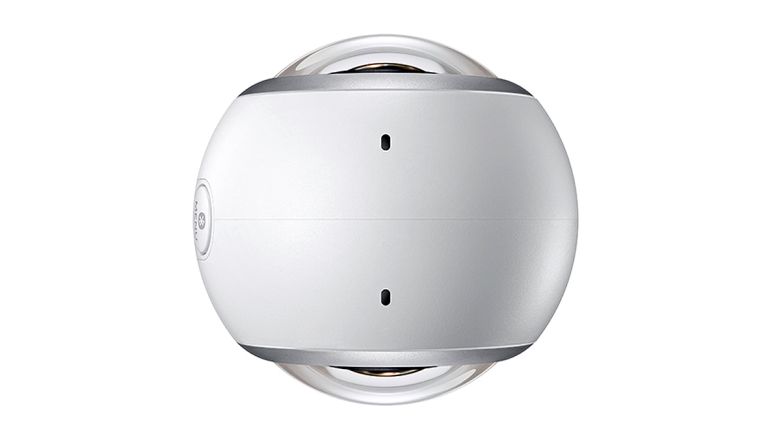 The original Gear 360 was a nifty little 360-degree HD camera that resembled an eyeball on a tripod, but an eyeball that looked both ways at once, like the Greek god Janus.

Well, now there's a new fisheye-packin' camera for 360-degree videos. It's got a 4K resolution, albeit only at 24fps, and it looks like an eyeball on a stick. Lovely.

The new Gear 360 lets you stream and upload UHD clips via your laptop or mobile, although streaming at full resolution may prove a big ask for most 4G connections.

The stick is for holding the camera, so you can do 360-degree selfies, but it can also be screwed into all the world's ever-burgeoning mountain of tripods and mounts.

The 360 has dual 8.4-meg sensors, allowing video capture up to 4K, while the lens has an f2.2 aperture that lets in so much light, Samsung has even called it 'Bright'. Textbook marketing.

Video and stills from the two cameras are then stitched together automatically into a 360-degree vista, ready for finger-scrolling and viewing via a VR headset, such as Samsung's own Gear VR.

With the microSD slot, which provides up to 256GB of storage, all the controls, and possibly the battery moved to the base, Samsung's all-seeing eyeball is now smaller than on the previous model.

At least in theory, as the lenses and sensors will this be closer together, the 360-degree view should be more seamless. At just 130g, the camera is very light.

Storage microSD card up to 256GB

The Gear 360 can also take time lapse and looping videos, as well as landscape HDR stills.

It's IP53 Certified resistant to dust and water, with dual band AC Wi-Fi and Wi-Fi Direct, Bluetooth 4.1 and USB-C connectivity.

Official compatibility is with Mac, PC, Samsung flagship devices from the S6 upwards, and iPhones from the iPhone 6S onwards. However it's actually compatible with anything running Android 5 and up, or iOS 10 and up.

Pricing and release date are TBC at this point.