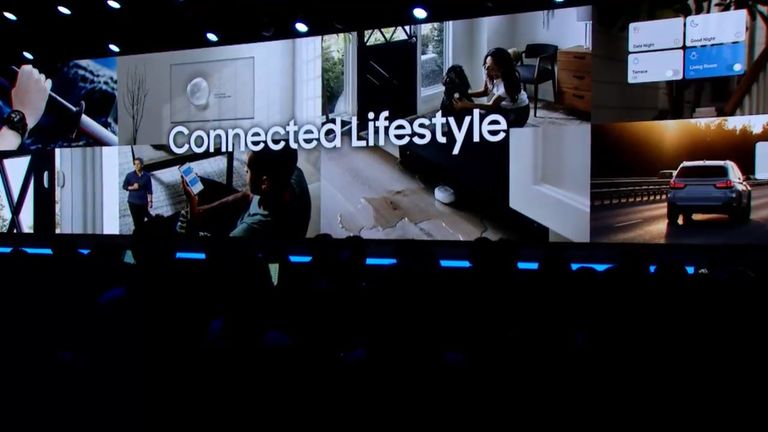 The keynote at Samsung's annual developer conference in San Francisco took place yesterday, and was opened and closed with some words from Samsung CEO DJ Koh.

The big news is that the long-rumoured Galaxy X folding smartphone was unveiled. A big phone, backed up by big words: "The smartphone reimagined", Justin Denison, SVP of Mobile Product called it.

However, the other big news is that the Galaxy X folding smartphone wasn't announced. But the Infinity Flex Display, the folding screen tech that will soon underpin the Galaxy X, was. And we got a brief glimpse – such a brief glimpse! – of an X-like, folding phone, seemingly at the 3rd-or-4th-prototype stage.

As well as this Galaxy X hardware, the software it'll probably use – dubbed One UI – was also shown off. And there were at least some semi-concrete facts. \

We know that when unfolded the Flex Display screen will be 7.3 inches across, and that you'll be able to have three apps open on it at once thanks to One UI – now THAT is multi-tasking.

The reasoning behind both One UI and Galaxy X (or whatever the folding phone ends up being called) is that, according to Samsung, larger-screened phones will over take traditional sizes in terms of sales by 2021.

Samsung thinks this is causing a lot of navigation/UX issues for people, giving them sore thumbs from all the reaching up those huge screens, and probably making holes in their pockets, to boot. But how can we make screens bigger without making the phone bigger?

Thanks to the miracle of polyamide and new lamination tech, we can now have the sort of curved screens that first appeared in the Galaxy S6 Edge. Samsung's next innovation, building on that, is the fully foldable Infinity Flex Display – "Arriving soon!" as the big screens declared at the developer conference.

Infinity Flex, which sounds like some kind of cabling solution, allows for a phone – which, for the sake of argument, let's call the Galaxy X that can be folded.

What we saw at the conference, oh so fleetingly, and in not amazing light, was a slightly chunky phone that folded out into a really quite thin, 7.3-inch tablet. The key design element was the absence of any kind of hinge or bezel down the middle. Which is good, because that would be a Nintendo Game & Watch.

Unfortunately there was way more about the development of the screen tech than any concrete killer use cases or anything about the internal spec of the device, so what we're left with is a phone that folds out into a 7.3-inch tablet.

It was interesting, however to hear about Samsung's struggles to make a screen that can be folded 'hundreds of thousands of times' and which is 'thinner than any mobile display we've ever made.' Main take away: this was done by 'narrowing the polariser', which I'd imagine is very hard, but probably not that interesting to people in Carphone Warehouse.

So, in conjunction with Samsung's forthcoming One UI (see below), the Galaxy X (or whatever it ends up being called – please note that nobody at the conference used that name – can function as both phone and tablet. Up to three apps can be run at once via Multi Active Window. It's a more desktop-like 'experience' on mobile.

There are so many issues this immediately raises, the main one being redesigning every damn app ever to work with One UI and a folding screen. However, Glenn Murphy from Google was on hand to say that the Android originator is 'super' behind Samsung's new screen tech, and thanked Samsung for their 'passion for innovation.'

You can also imagine that, with the equivalent of three normal phone screens in one device, the X will be pricey, but since iPhone X's debut in 2017, we're probably used to that idea by now.

Folding phones are here, but how do we make them work?

Samsung top don DJ Koh summed up by saying, "One UI and foldable displays are redefining mobile… at a key time in our industry… creating new opportunities at a scale we never imagined."

Koh also expressed a desire to work with companies big and small 'in an atmosphere of mutual trust, which, for a Korean monolith like Samsung, is almost verging on humble.

One UI is Samsung's overhauled interface/skin for its Android smartphones.

Despite some slightly gnomic observations along the lines of, "The rounded corner of our hardware is now reflected in our software," there was a lot of interesting stuff here.

One UI is all about helping you find the functions you're after in a more fluid way, and to make it easier to use today's larger phones. As such the upper part of your phone is stuff you look at, with control/interaction handled at the bottom. No more having to grope for the top of your outlandishly large phone with your thumb!

Other features included homing in on features related to what you're doing right now with the phone, losing the extraneous buttons and options that can blight mobile navigation.

The One UI beta programme begins in November. 'One UI represents big, bold thinking,' Samsung says, and it'll start rolling out (for interested developers) on S9, S9+ and Note 9.

Everything connected to everything

Samsung makes white goods, mobiles, TVs, speakers and robot gun turrets for the border with North Korea. Now, all of those things apart from the last one will be potentially connected to each other via Samsung's SmartThings connected IoT platform.

A recurring trend at the conference continued here, with Samsung appealing for the assembled devs to come up with great ideas to use this 'everything connected' approach. TVs, not surprisingly, and fridges, a bit surprisingly, were flagged as being the pivotal devices here.

Samsung needs that help, because having everything connected is a fine and dandy idea, but where do you go with it once you've got past 'You can watch Game of Thrones on your fridge'?

Not that there's anything wrong with watching Game of Thrones on your fridge. Or, indeed, monitoring the contents of your fridge, via its built-in camera, on your 65-inch OLED TV.

As in previous years, Bixby – 'now with 10 million users!' – was hailed as a key component of controlling all these connected devices. Realistically, with Google Home, Amazon's Alexa and to a lesser extent, Siri in the same market, we all know that isn't going to happen… But hey, Samsung loves to do its own thing, and who are we to stop them?

Because Samsung loves to do its own thing, rather than using existing ones that work perfectly well, the Galaxy Home speaker isn't an Alexa or Google Home device, but a Bixby-powered one.

As we were just discussing, Samsung's big idea this year is to make every 'thing' a Smart Thing and Galaxy Home is potentially a key part of this. It looks more like an Apple Homepod-style, high quality speaker rather than an Echo- or Google Home-like smart speaker that does music as a side order.

That said, it is very hard to see any third party successfully taking on Amazon's Alexa or Google's Assistant at this point but, like we said, Samsung loves to do its own thing…

And finally, here's how the event started…

Rewind! The conference opened with DJ Koh, who is not an actual DJ; that's just his initials. He welcomed students, declared Samsung to be the world's 6th biggest brand and hailed the manifold smartphone achievements of Samsung.

"What lies on the other side?" he then asked, not unreasonably. "We see a new era of experiences that break the boundaries of individual devices… spanning work, home, health and fun."

"We will unite all of Samsung's IoT services," DJ Koh continued, warming to his theme. What this means in concrete terms is that now ALL of Samsung's disparate connected services will come under the SmartThings banner. So that's nice.

"From TVs to refrigerators, one seamless interface!" Said DJ Koh. "SmartThings will unite the world's largest ecosystem of connected things, beyond the smartphone. Wearables! Refrigerators!"

Fridges are to be a key factor in the next wave of IoT, it seems.

You've got to say, Samsung's team are not as good at being hype-men at these events as Apple's guys. But then that's because they're required to speak in English, which is their 5th or 6th language, whereas for Apple it's only their 2nd language, after bullshit. The fact that the crowd Samsung attracts seems much less keen on whooping than Apple's doesn't help.

Perhaps the main reason this event felt a little subdued is that Samsung was trailing devices, services and technologies that still remain some way from going on sale, and being part of our lives.

Nonetheless, there was plenty of interest to look forward to.