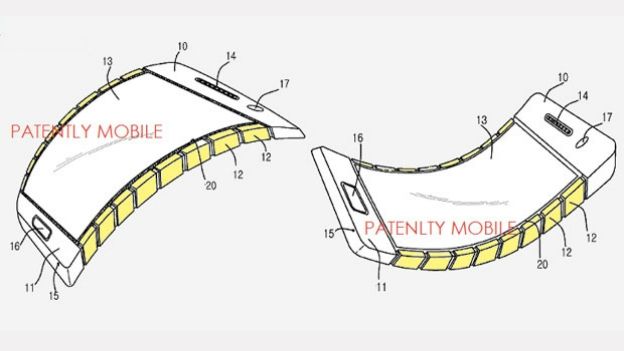 It looks like the folks at Samsung are looking to the future of mobile phones, as a patent from last year surfaces for a radical new flexible smartphone.

Technology is about innovation, bringing something new to the table. Samsung recently showed that by debuting the side-bending Galaxy S6 Edge – and now it has something else in the works.

A Samsung patent has just surfaced online for a smartphone with a completely flexible design.

Spotted by PatentlyMobile, the filing details a handset with interlocking panels that can freely bend forwards and backwards.

While there's not much to go on, the entire phone is said to be flexible as opposed to staying curved in a fixed position like the Samsung Galaxy Round and LG G Flex 2.

It also looks like Samsung is aiming this one at active users. Why? Well, the patent suggests the phone will come with sections that allow it to clip onto a user's clothing, making it ideal for sports and eliminates the use of an armband or case.

Being completely flexible, it might even be possible for the phone to wrap against the arm of the wearer – now that would be cool.

Despite just coming to light, this patent isn't exactly new. Samsung filed the application with the U.S. Patent and Trademark Office almost a year ago in Q2 2014.

While the device in question may not even materialise, there is certainly potential for something new down the line.

What do you reckon? Does a flexible smartphone interest you or is it another technological fad? Let us know in the comments.