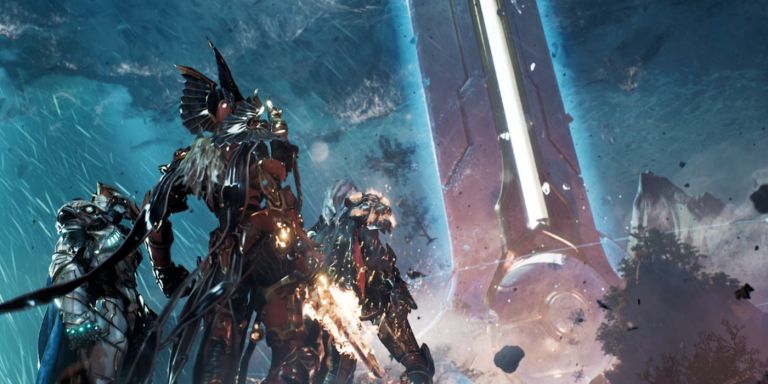 The Game Awards 2019 were full of surprises, but there were two big announcements that trumped them all. One was a first look at Microsoft's new console, the Xbox Series X. And the second was footage from Godfall, the first PS5 exclusive to be officially unveiled.

Although Godfall's launch trailer made headlines when it debuted on the night, a second clip missed by a lot of outlets (including us) dropped afterwards, tucked away on Godfall's official Twitter account.

The clip, shown in the tweet below, was simply titled "Be Ready For 2020". It features actual play from Godfall, as one of its three protagonists in armour attempts to carve up a giant stone-golem-looking creature while being hit by the creature's hammer. The creature also picks the player character up and slams it to the floor.

This is a small, but very significant clip, representing the first in-game representation of what the PS5 is capable of. The environments are sumptuous and interaction between the character, the enemy and the environment is seamless. The physics too, seen in the way the character's cloak floats as he moves and hangs limp when lifted up.

We can expect this level of detail in everything, from crisp, colourful environments for next-generation platforms to (probably) individual blades of grass being rendered for the inevitable FIFA '21. It's also made us even more excited to play Godfall, which is set to debut as a PS5 launch title.

Said to be inspired by Monster Hunter and the epic Stormlight Archive book series, Godfall is a fantasy action-RPG and the first "looter-slasher". Developed by the Borderlands creators Gearbox Publishing and Counterplay Games, Godfall looks set to take the Borderlands loot system and apply it to an action-orientated fantasy world.

"Our goal with Godfall is to reforge fantasy ARPG-style loot progression and third-person melee combat into a whole new genre: The Looter-Slasher. Namely, our game is uniquely one-part gear driven and one-part player-skill driven.

"Godfall retains the desire for offense-oriented, mastery-driven combat, rewarding you with head-turning, powerful loot that then inspires your next set of character builds."