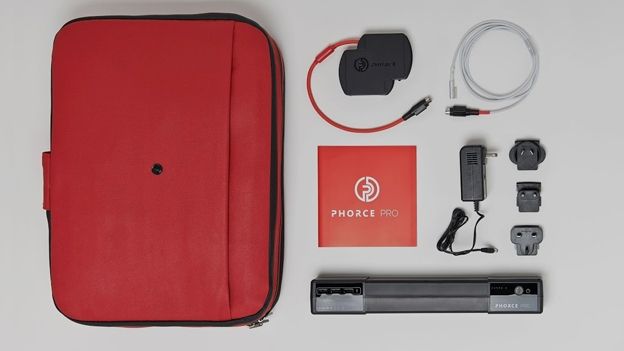 What's that? A briefcase?! Shove it, pal - there's a smarter way to haul your gadge around...

Forget the lifeless, uninspired bags of yesteryear - Phorce Pro is a revolution in smart-lugging your electronic wares.

Dubbed the 'world's first smart bag', Phorce Pro is a professional-targeted wearable (sort of, anyway) that looks to upgrade your day-to-day tech-ery.

"It powers devices on the go, transforms shape, and wirelessly communictes with smartphones," gushes Phorce.

Where to start? Well first up, it's actually three bags in one, with the Phorce Pro capable of doing a style switcheroo between briefcase, messenger bag, or backpack.

It's also good to charge up to three devices at the same time - so that's your laptop, tablet, and smartphone covered.

It also pairs up with a smartphone app to give you the low-down on stuff like battery percentage. There's also a nifty loss-prevention feature.

"It even sends a message when you forget it somewhere," says Marijn Berk, Phorce founder. That's right - leave it at the local Costa and you'll get a text tout de suite reminding you of your carelessness.

There's also some fancy sensory tech built-in for motion detection, plus it's made from water-resistant fabric and touts waterproof zippers - what a clever cloggs carrier.

"Using a traditional bag is like using an old cell phone: it has just one carrying mode and only performs a single function," gushes Berk.

"It's time to rethink what a bag can be and do and bring them into the future. Your bag should adjust itself to your needs and environment, not the other way around."

Check out the Phorce Pro in the video below: