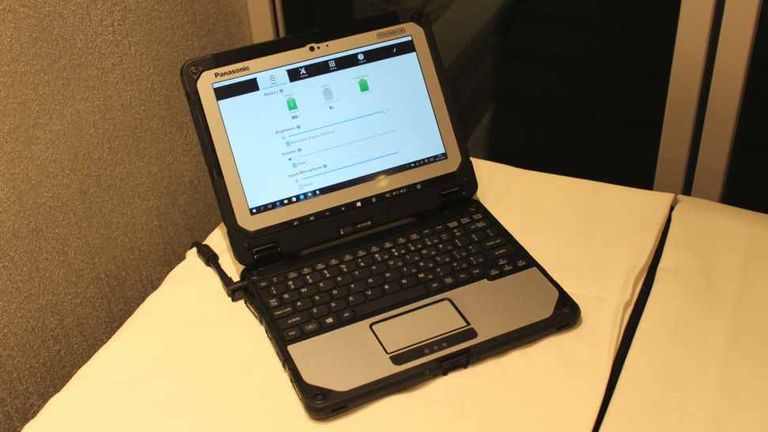 Panasonic has launched the world's first rugged tablet with a detachable keyboard. Called the Toughbook CF-20, the device is aimed at business users — but there's nothing stopping you picking one up if you like the idea of a practically indestructible 2-in-1.

You'll need deep pockets though: at £2,218 (plus tax) you could buy three Surface Pro 4 tablets for the same amount of money. Should you shell out for one, you'll get a device that can switch into six different operating modes thanks to the detachable keyboard, which is just as durable the tablet and can extend the device's battery life due to housing a second battery inside.

The Toughbook CF-20 is designed to take a knock or five. According to Panasonic, the magnesium-reinforced tablet part can withstand drops of up to 1.2 metres and has passed the IP65 and MIL-STD 810G military tests.

The CF-20 sports a Full HD 10.1-inch IPS display with 10-point multi-touch. The display can reach up to 800 nits brightness, which should be plenty for reading or doodling using the supplied IP55 Digitizer Pen in bright sunlight. Combined, the tablet and keyboard parts weigh just under 2kg.

There's a 2MB webcam with stereo microphones on the front, and a 8MP rear camera. It can be configured with 4G LTE, in addition to U-Blox 8 GPS for precise navigation. When not out in the field, users can hook the CF-20 up to a Desktop Port Replicator (a dock, in other words), which allows a monitor and other peripherals to be connected while charging the batteries in the tablet and the keyboard.

The Pansonic Toughbook CF-20 goes on sale in January.