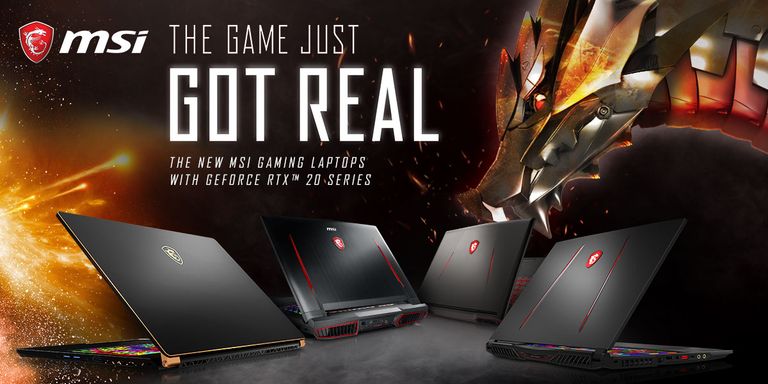 The gaming laptops were revealed at MSI's New Horizons event at the world famous The Venetian Hotel Casino in Las Vegas, and include the GS75 Stealth, GS65 Stealth, GT63 Titan, GT75 Titan, GE75 Raider and GE63 Raider, as well as the GL73 and GL63.

Naturally, as T3 is reporting live from CES 2019 we were in attendance at New Horizons to see these systems revealed, and here we break down the lineup to explain how the systems differ and what they offer to gamers.

We start off with, though, with the system that impressed T3 most - the MSI GS75 Stealth.

The MSI GS75 Stealth is the world's first thin and light laptop to feature Nvidia's insanely powerful GeForce RTX 2080 8GB GDDR6 graphics processor. This next-generation GPU is then, amazingly, squeezed into a premium sandblasted chassis that is only 18.95 mm thick, meaning that not only is the GS75 a powerhouse but it is incredibly portable and stylish, too.

This core pairing is then partnered with a 17.3-inch 144Hz IPS-level display, which has been designed for gaming immersion in mind, as well as an extra-large glass-coated trackpad, per-key RPG keyboard design by SteelSeries, and next-gen cooling system (Cooler Boost Trinity+) that uses seven heat pipes and three whirlwind blade fans to keep heat and noise under control.

Apart from that, though, the system delivers the exact same high-end gaming package that its bigger brother does, pairing Intel 8th Gen processors with that super-powerful GeForce RTX 2080.

This system has impressed critics at to such an extent that it has won a CES Innovation Award.

For gamers looking for a more traditional gaming laptop aesthetic then the new Raider range of systems should appeal. The GE63 Raider RGB not only sports a per-key RGB keyboard designed by SteelSeries but also a backcover that lights up as well, while the GE75 boasts a brace of 3D Dragon Spines on its rear with a sharp anodized red diamond-cut finish.

This gamer flair is then backed up 17.3 and 15.6-inch Full HD 144 Hz displays, 8th Gen Intel Core i7 processors and, yes, that delightfully powerful Nvidia GeForce RTX 2080. These systems aren't as thin as the GS series, or as powerful as the Titan series, but arguably sit in the middle-ground, offering big power in a more traditionally-sized gaming laptop chassis.

As you would expect from systems with the word "Titan" in their names, this brace of new gaming laptops from MSI are substantial beasts, both in terms of specs and in terms of physical build (4.56 kg and 2.94 kg respectively). Both offer the same GeForce RTX 2080 8GB GDDR6 graphics as the GS75 and GS65 Stealth, but here the GT75 can push the contained CPU up to an 8th Gen Intel Core i9 for massive processing power.

In terms of screens, too, both systems can be equipped with with 4K screens as well, not just Full HD units, which on the 15.6-inch GT63 is a rather unique proposition.

Other features of note are the Rapid Mechanical RGB keyboard by SteelSeries installed in the GT75 Titan, Dynaudio sound system that features on both systems, and the ability for buckets of SSD storage, too.

And, finally, rounding off MSI's big CES 2019 gaming laptop showing, is the new GL series. The GL73 and GL63 are the maker's new accessible portable gaming systems, with the GeForce RTX 2080 swapped out for a more mid-range GeForce RTX 2060 6GB GDDR6 GPU. Be under no illusion, though, these are still powerful systems, just not as powerful as MSI's top-of-the-range offerings.

And, when you factor in that both the 17.3-inch GL73 and 15.6-inch GL63 both come with Full HD screens, that GPU downgrade doesn't seem to be much of an issue at all, with both system's specs more than enough to handle today's most demanding AAA games at that resolution.

Naturally, as T3 covers all the best gaming laptops on the market, we will look forward to going hands on with all these systems shortly, so be sure to check back in  to T3.com soon for our full, official reviews.

For more information about all of MSI's new 2019 range of gaming laptops then head on over to the maker's official website now.