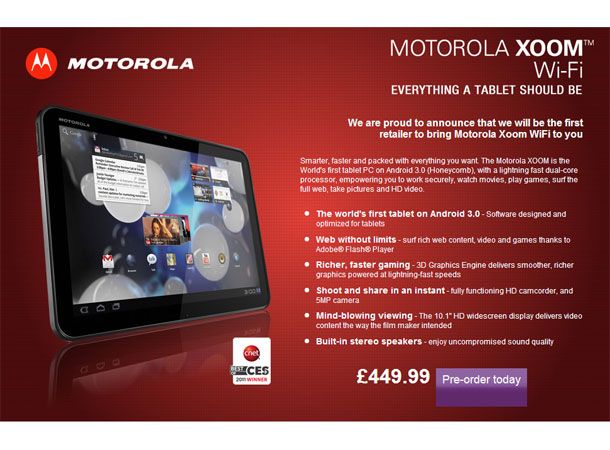 Already available to buy in the US, Motorola's first tablet device the Motorola Xoom has been made available for pre-order in the UK with PC World announcing it will stock the Wi-Fi only model for just £449.99.

Almost £11 more expensive than the entry level, Wi-Fi only iPad, PC World has yet to announce when the Xoom will be available for purchase in the UK. With the Apple iPad 2 due to be officially unveiled tomorrow, Wednesday March 2nd, however, Motorola and retailers of the Xoom will no doubt be hoping to beat Apple to the punch.

The first device to come equipped with the tablet-centric Google Android 3.0 mobile operating system, Gingerbread, the Xoom features a hefty array of specs with the device's 1GHz dual-core processor and dual cameras trumping the original Apple tablet and expected to match the credentials of the second-generation iPad.

With a 5-megapixel fitted around the back capable of 720p HD video recording with a further 2-meg snapper up front for video calling, the Xoom's specs are rounded off with 10.1-inch capacitive touchscreen, and 32GB of internal storage, expandable via SD.

Will the Xoom's iPad competitive pricing help make it the first Android tablet to truly challenge the Apple mantle of tablet supremacy? Let us know what you think via the T3 Twitter and Facebook feeds.