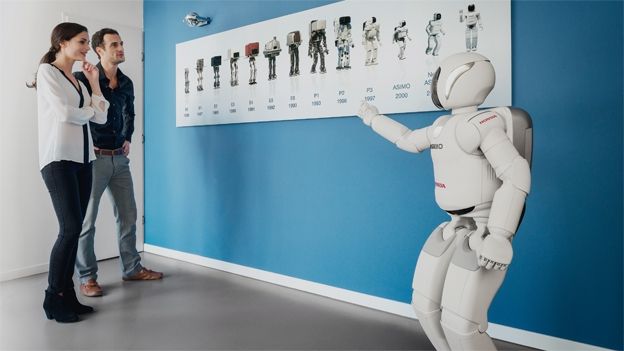 Since its 2000 launch, Honda's flagship robot has seen huge advancements, with the latest update finally making the droid 'autonomous'.

Honda has updated its ASIMO robot, adding a bunch of new features and creating a much more human-like robotic experience.

The upgraded droid can now run at 9km/h, boasts a 40-minute operating time while running, and is able to predict the movements of nearby humans.

Intended to operate effortlessly in a human environment, the all-new ASIMO will use sensors to guess the direction of a person's movement, and accommodate this intention by re-routing its own path.

The ASIMO can also distinguish between multiple voices all speaking at the same time - not an easy task, even for us human folk.

The bot sports a high-functioning, multi-fingered hand equipped with tactile- and force-sensors, meaning the ASIMO can perform tasks requiring a high-level of dexterity - like taking the cap off a water bottle for instance.

The space-age show-off is also well-versed in sign language, if you weren't already impressed enough.

"The all-new ASIMO has now advanced from an automatic machine to an autonomous machine," says Vikki Hood, Corporate Communications Manager at Honda.

Hood says the new Robot has "the decision-making capability to determine its behaviour in concert with its surroundings such as movements of people."

To be classed as an 'autonomous machine', the ASIMO needed to meet three criteria, namely: high-level posturing balance, external recognition of environmental changes, and generation of autonomous behaviour i.e. its actions are self-determined without the need for an operator.

"With these capabilities, the new ASIMO takes another step closer to practical use in an environment where it can function harmoniously with people."

ASIMO, which stands for 'Advanced Step in Innovative Mobility', was first realised back in November 2000, and has undergone at least five major revisions since then, with the 'All-New ASIMO' being the latest.