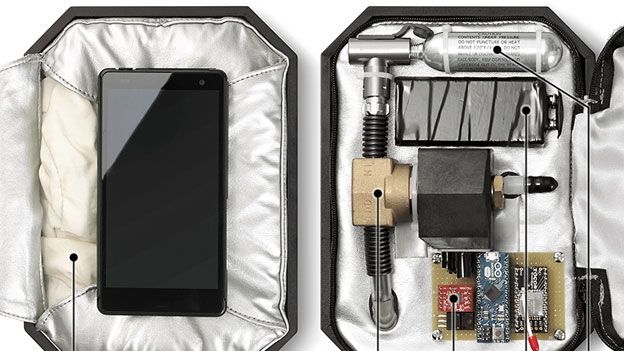 Honda has unveiled a mobile phone case that comes complete with airbag to protect your handset should you drop it.

It's an ingenious idea - a case for your smartphone that stops it getting damaged should you drop it. But this isn't just any old hardwearing case. This one has an airbag built in. Drop you phone - the theory goes - and it'll inflate, cushioning the blow when it hits the ground.

Unfortunately it's too good to be true. Head to the official Smartphone Case N webpage, and you'll see the disclaimer "This story is fiction", which rather takes the wind out of its sails a bit.

It's all part of an advert for Honda's N-Wgn people carrier.

Honda obviously thought it through though. It promised an accelerometer would detect when your phone starts falling, and then a carbon dioxide canister would fill up the airbag in just a fraction of a second.

OK, so the case itself may be way too big to fit in your pocket. But if it protects your shiny gadget, who cares?

There's even a video showing the design process behind the case. The unfortunate fellow starring in it has dropped his phone, and can't see his cat pictures on the cracked screen. This spurred him on to create the case, so the fictional story goes, anyway.

Would you like to see the case made real? Have you ever dropped your phone and cracked the screen? Let us know in the comments below.