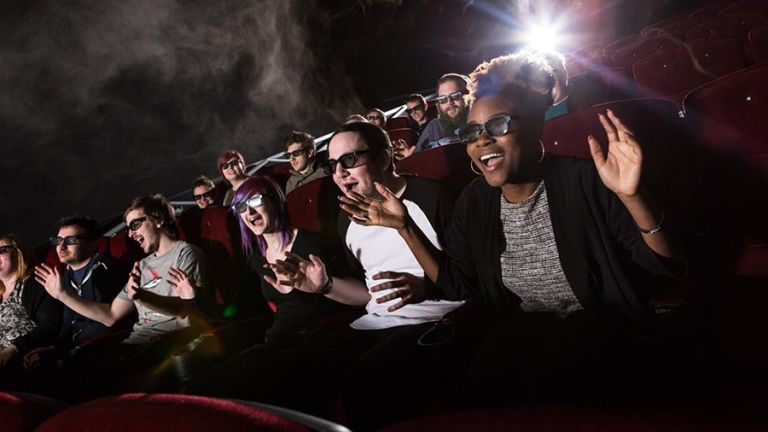 You might not have given the screen resolution much thought as you settled down to Rogue One over Christmas, but films projected in cinemas are set at certain quality levels just like the movies playing from your smartphone or the Apple TV set up at home.

So what resolution are you looking at when you take a trip to the local multiplex (or independent)? And how much better is it going to get over the next few years? We're here to answer all your questions about movie resolutions both now and into the future.

Most cinemas made the jump from film reels to digital projectors at the start of the 2010s, as the technology became cheap enough and good enough to keep movie-going audiences entertained.

A lot of the benefits are obvious - being able to download new releases over the internet, for example, rather than shipping reels through the post.

While a lot of film directors still like to have their films shot on film and projected on reels - including Christopher Nolan and Quentin Tarantino - it seems as though the die has been cast. You can still find cinemas using film, but it's getting harder.

The resolution of a movie shown in a digital cinema is measured by the horizontal pixel count, so 2,048 x 1,080 pixels for 2K or 4,096 x 2,160 pixels for 4K. Note that there's a slight difference between this and the consumer 4K standard used on televisions and streaming services, which usually refers to frames of 3,840 x 2,160 pixels. Confusing, right?

The quality of the movie your watching will depend on other factors, like the screen size and available lighting, but those resolutions are at the core.

For comparison purposes, 70mm film - still considered by many to be the gold standard - is roughly equivalent to a 12K resolution in digital terms, so digital's still got some catching up to do on that score.

What resolution are movies at my local cinema playing at?

It's difficult to say without ringing them up and asking, but most major cinemas in the UK and a lot in the US will now use 4K digital projectors, and will have been doing so for several years.

The standards of digital cinema are controlled by a body called Digital Cinema Initiatives, which a lot of the major studios have a stake in. The idea is to put across a certain set of standards for projecting and displaying a digital movie that cinemas can then follow, guaranteeing a particular level of quality for the filmmakers and audiences.

For example, the best screens in most Odeon cinemas use 4K projectors producing almost 9 million pixels, but the difference between a projector and the smart TV you might have at home is that the screen size isn't fixed - it's up to cinemas how big the picture appears.

IMAX demonstrates this difference rather well: it can be used with 70mm film as well, but when recorded digitally, the screen resolution is only 2K or 4K. It's the huge screen, powerful magnification and other tweaks that make the IMAX experience so immersive.

And - as with your smart TV at home - it's only when the screen gets to a certain size that you can notice any difference between 2K, 4K, IMAX and film reel projections anyway. On smaller screens, the quality your eyes can detect will be more or less the same.

When is 8K going to arrive?

8K cinemas are still some way off - we've already mentioned that better resolutions only make a difference on huge screens, and cinemas and filmmakers are still getting used to the 4K format. There's no huge rush to take the next step.

We've only just seen the first movie shot on 8K - Guardians of the Galaxy Vol. 2.

That said, it's inevitably going to happen one day, just as HD eventually made way for 4K: it's just a better, more detailed picture. There are a handful of 8K projectors and video cameras around, an even an experimental movie theatre or two, but it's still going to be several years before we see 8K hit the mainstream (the mainstream being the cinema you go to on a Saturday).

Remember that when you bump the technology up another notch, all the other parts of the filmmaking process have to come along with it, from the software you're using to make your visual effects, to the computers you need to finish the editing on.

Even on gigantic, IMAX-style screens, the difference between 4K and 8K may not be noticeable, and we're starting to push the limits of the number of pixels our eyes can take. It may be that future innovations in display technology in cinemas take the IMAX route, focusing on extras like brightness and contrast rather than the numbers of pixels.