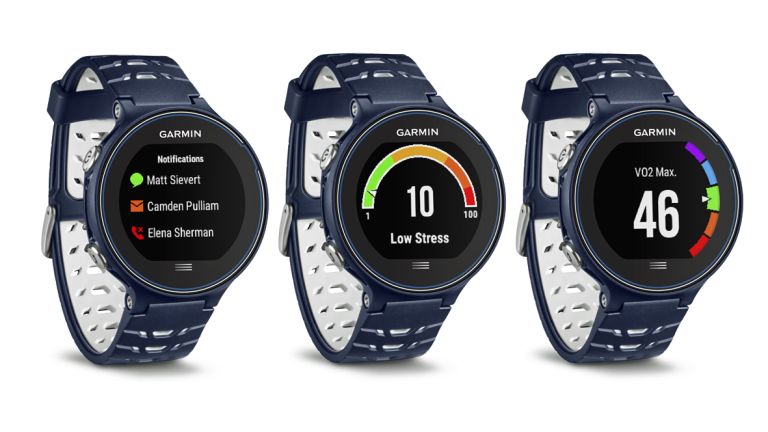 Garmin has announced a trio of running watches in thenext chapter of the high-end fitness watch war.With Polar also unleashing new bullets (watches), we don't know if Christmas will be white… But it will be sweaty.

Garmin's biggest new gun is a new flagship GPS running watch, the Forerunner 630, featuring what Garmin claims is its “most advanced running watch technology yet”, and touting significantly improved running dynamics metrics. This coming from a company like Garmin, seeking to improve on the already hardcore former flagship 620 means serious business.

In common with the 620, the new 630 has a touchscreen interface, and highly customisable screen fields now via the Connect IQ smartwatch platform, but has branched out to include smartphone notifications, mainly to keep up with the Joneses. This new smartness also extends to wireless music controls, and pleasingly Garmin have retained the wifi-sync function of the 620 into the bargain.

The 630's advanced dynamics will take some beating in pure data terms though, with real time stride measurement, ground contact symmetry measurements, and measurements of the cost-benefit ratio of vertical oscillation to stride length (vertical ratio). Meanwhile there's considerable physiological additions in the shape of a lactate threshold estimator, a stress measure, and an overall performance condition check, which will indicate performance readiness in real-time. On the HR side there's a VO2 max estimator, as well as zone training and standard HR.

Unsurprisingly, Garmin have gone the whole hog and added a daily activity tracker into the mix too, making this 630 a very serious candidate right across the board.

The brand's also dropped two new midrange GPS models, the Forerunner 230 and 235 - the latter featuring a full colour screen and Garmin's own new wrist-based HR sensor tech, called Garmin Elevate. The 230 meanwhile relies on a tried-and tested chest strap, but is priced lower, with an RRP of £209.99 compared to the 235's RRP of £239.99. The Forerunner 230 will be available in black/white, purple/white and yellow/black, while the Forerunner 235 will be available in black/gray, black/marsala and frost blue/black.

Meanwhile Polar has launched an activity-tracker-style monitor, in the shape of the Polar A360, the company's first wrist-based HR tracker. The A360 will be available in November 2015 for £154.50.