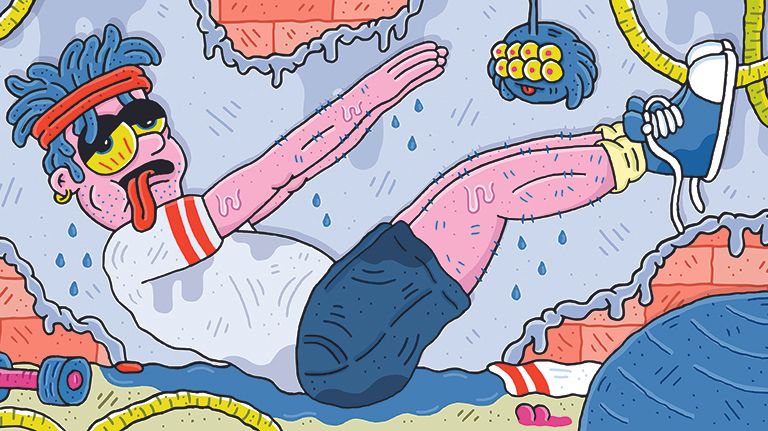 GaGu, how can I strengthen my core?

Plank! Dish! Side bend! Leg lift! Now imagine GaGu is blowing his whistle at you and pulling a stern face. But Guru knows the look he’s getting in return. It’s the look of a sad puppy who wanted some gadget advice. A puppy who has spent a lot of time watching infomercials and shopping channels, who believes that true core strength comes from buying a weird vibrating gimmick rather than good old-fashioned hard work and bodyweight exercises. And who is Guru to argue?

The obvious news: most fitness gadgets are designed to mainly strengthen the wallets of their creators. Guru has trodden this ground so often that he’s starting to wear a hole in the carpet. Those that do work are generally based on classic exercise techniques. Crossrope’s weighted skipping rope ($69-$258) turns jump rope into jump very-heavy-thing, adding muscle training where you’d normally just be doing cardio. A gym ball — or, if you’re feeling flush, a Bosu Ball (from $39.95) — is a great way to add balanced-based unpredictability to standard exercise movements, forcing you to tighten those guts.

And now we come to the point at which Guru is forced to admit that there is a new-fangled device which could actually have a beneficial effect on your core. Yes, the TRX system (buy the pro version, which costs £188) mixes pro athletics and Navy SEAL training techniques, dangling bits of you from straps to enable some crazy exercises that wouldn’t be possible were you not strung up like a sweaty marionette. It could be a fad — the requisite gym classes are popping up all over the place — but if you’re desperate to have core that’s stronger than a concrete apple, this training is a strong choice. See also cheaper versions of the same thing: the WOSS Titan Pro comes in at under £50, and you could spend as little as £30 if you’re willing to suspend yourself from something which may snap at any time.

Can I make old games consoles work with my TV?

There are several reasons why new tellies and old consoles don’t get on particularly well. Primarily, this is because new TVs, generally built to ever-tightening budgets and with absolutely no love or respect for the past, have done away with much of the circuitry required for backwards compatibility with ancient tech.

There’s now no such thing, for example, as analogue TV in the UK, so why would any manufacturer bother to include an analogue tuner? Ditching analogue tech obviously means that everything can be stuffed onto fewer and fewer chips: this is exactly what the world is coming to, people.

There are various cheeky workarounds if you’re dealing with a console that only has an RF output. See, for example, if you can get your hands on an old VCR player with an output that your TV supports. Find your console using its analogue tuner and you will at least be able to get it on screen. Alternatively, your TV may still have a composite input, which is nice if your console supports it, but the chances are that you’ll need a new cable. Whichever way you play it, Guru would wager good money that you’ll ultimately be saddened by the results: a blurry, poorly-scaled, awfully coloured mess of pixels.

You could go to the trouble of having your console converted for RGB or even component output – there are enthusiasts out there who can do it for a fee and usually a long wait time – but this is unlikely to solve the problem completely. You could end up with slightly less fuzz and better colouration, but that’s about it.

The favoured (though not exactly cheap) solution of the retro gaming crowd is the Framemeister, a bit of Japanese-import tech that does the technical shizz-whizz required to turn any old analogue input into a beautiful digital one suitable for your TV. Sharper pixels, better colours, spot-on scaling; the Framemeister can even add scanlines to its output for an authentic but definitely-not-authentic CRT experience.

Why are my phone shots so shaky?

Here are the possible reasons, which we have listed in order of likeliness: your phone’s camera is a bit rubbish; you’ve got your settings completely wrong; you’re going a bit heavy on the old caffeine of late; it’s slightly dark.

You can at least mitigate the problem in software, of course. Every modern smartphone gives you access to far more than just point-and-shoot controls; swiping the side of the screen is usually the way to gain access to these manual settings. Increase the shutter speed to ensure it doesn’t stay open any longer than it has to, and switch off HDR mode.

If even this doesn’t overcome your jittery muscle spasms, then try a gimbal (which could be overkill for static photos), a cheap portable tripod (the £19 GripTight Gorillapod is always a good option), or even setting your phone’s camera shutter on a timer, which will give you a second or two to hold it steady after tapping the screen. Successfully capturing a moment, however, might simply mean picking up a new phone.

Can tech help me to train my kitty cat?

Nothing, reader, can help you train your cat. A cat will do precisely what a cat wants to do. Guru may claim to have trained his own litter to puke on the rug and/or destroy furniture on demand, but that’s all a ruse. Feel free to give it a try, though.

The PetSafe Deluxe In-Ground Cat Fence System (£153.99) will beep at or alternatively give the cat some mild, harmless 'electric stimulation' (of which four levels are available) should it stray beyond its boundary.

You could attempt to force your cat to poo on the toilet with the Litter Kwitter (£39), or scare the bejesus out of it with a hissing can of compressed air – the £4 Pet Corrector. Perhaps don’t do both at the same time, though.

Are Bluetooth locks actually safe to use?

They’re less safe than other locks, but only slightly – you can’t shoulder-surf a regular lock unless you’re a savant with your own key cutting machine, but the ‘cheat codes’ of many Bluetooth locks are all too easy to replicate if you’ve seen them entered. On the flip side, a cheap regular lock is usually easily picked if the attacker has the skills, which isn’t the case when electronics are put in charge.

Realistically, though, any lock is only as strong as its materials and the determination of the potential thief; if you’re worried about your valuables, then buy the heaviest metal protection that you can carry.

Can I control infrared kit with a phone?

If you have a phone with an infrared ‘blaster’ then a universal remote app such as ZaZaRemote (free) will do the business. If you’re blaster-less, you could use the various 3.5mm jack or OTG infrared modules available via the Eastern corners of the internet.

To do it right, though, save a space in your lounge for Logitech’s Harmony Ultimate Hub (£80), which pairs with your smartphone to create a true universal remote system. You can even use it with thing-automation website IFTTT.com to fire up your kit based on custom stimuli.