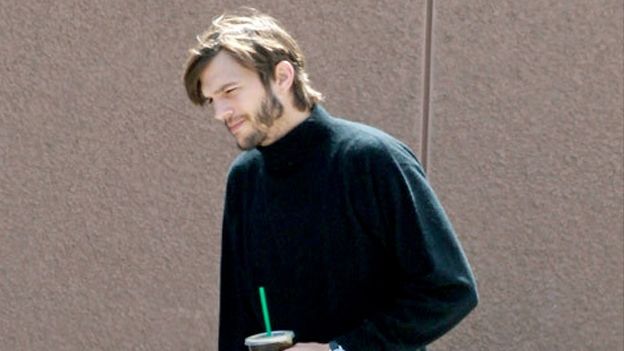 The first pictures of Ashton Kutcher as Steve Jobs show a strange hybrid of his 80s hair and beard and 2000s wardrobe, but the resemblence is still somewhat striking

The tech world, and indeed the world at large, let out a collective "Huh? Really?" when it became known that Dude Where's My Car actor and Twitter celebrity Ashton Kutcher had been cast to play the late Apple visionary Steve Jobs in a new biopic.

While many of the Apple co-founder's loyal army of disciples choose to pretend that the independent 'Jobs' movie simply isn't happening, that facade is going to be very difficult to sustain, now the first photos of Demi Moore's ex-husband in full Jobs regalia have appeared online.

The snaps were obtained by US celebrity website TMZ (which somehow seems to get its hands on pretty much everything) feature Ashton dressed in Steve's trademark black polo neck, stonewashed jeans and trainers.

While the 34-year-old is wearing 2000s era Jobs clothes he was boasting an 80s era mop-top and beard, so where the producers are going with this one, we're just not sure. Still, the resemblance is relatively decent

A couple of months ago we reported that Kutcher reckons he was "born to play this role" and is, apparently engrossed in the process of becoming the iPhone mastermind.

We don't want to write the guy off. He seems like a nice fellow, but if this movie turns into some sort of travesty then, considering the warm and protective feelings tech fans still have for Jobs, things could get very ugly.