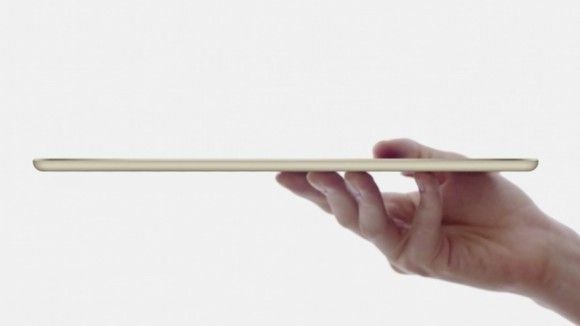 Summary: no Apple TV, not even an upgrade to the set-top box. But there is a new Mac Mini! Also Yosemite and the new iWork are available from today and are free. iOS 8.1 is out Monday. Apple iPad Air 2 is thinner, "180x faster" graphics, much improved camera. The new iMacs have "5K Retina" displays with 14.7 million pixels. Pricing largely down compared to previous models.

Oh, that's it. No iOS-powered super-TV for YOU today, sir. The new iMac does look very nice, if you're still in the market for a desktop computer. The iPads too. Sales of iPads are supposedly slowing, we'll see if this revives them. The graphical power it puts in your hand does seem to suggest the end for portable consoles and might even dent sales of the Xbox One and PS4.

19:20 There's nothing wrong with Tim Cook's delivery. He doesn't have the same edge of aggressive nerd-charisma his predecessor did but he's not bad. However, unlike Craig (see below) his hair is quite disappointing. Gran-like.

19:17 Tim Cook reiterating this is the strongest Apple line-up ever. "There is no better thing to have in your hand than the iPhone 6" Hmm, many a gentleman would argue with you there, Tim.

19:11 Lengthy promo video about how nice the new screen is. Up to 4GHZ quadcore i7. Thunderbolt 2 ports. No arsenic in the glass - always a plus if you like licking the screen of your computer.

iMac sales are up too. Natch. Macs are the best they've ever been. Well, obvs. 14.7 million pixels in the display of the new one. The Retina 5K, laydeez and gents. More efficient backlight for 33% lower energy consumption than previous model. And improved off-axis contrast ratio! Yup. Oh, Phil's voice is making me sleepy… So sleepy.

19:00 iPad now has desktop type power, says Phil. "It will blow you away". It comes in gold, from $499. I'll put up some pics in the moment because my arthritic fingers can't keep up with Phil's spiels. He really breezed through the iPad Mini 3 speech. I think the only polite word is "mercifully".

18:55 a Scandinavian man is explaining how you can remove a goat from a photo 2x faster than on iPad Air. Eh?

18:52 Phil, like Tim, has a very soothing voice. His words are blurring into a hypnotic mass of statistics and buzz phrases. Including TouchID, which is now on the iPad. But we knew that, of course. Works with Apple Pay-supporting apps from Monday.

18:48 The iSight camera takes 1080p video. Phil wants to show you some pictures. "Look at the low noise on THAT!" he yells, tearing off his shirt, throwing his head back and baying like a wolf. "Look at the level of detail in this macro shot of a parrot!" Yes there's burst mode. But we knew that of course. You can take time-lapse footage with the video cam. And slow-mo. Ooh, balloons! Dual mics give pretty audio quality. f2.2 aperture on the front cam for video chat and self-self-selfies.

18:44 Here's Phil Schiller, who looks like Scott out of Canadian comedy sketch show Kids in the Hall, if anyone remembers that. He's explaining how they've made it thinner - narrowing the gap between LCD panel and screen. Surface reflections are down 56%.

The new chip is the 64-bit A8X with 3 billion transistors. 40% faster than the A8 or possibly the A7 - slightly ambiguous. Graphics are 180x faster than… something. The last one, presumably.

How do you make the iPad better? Cue video. There's a pencil being attacked with a ray gun. Oh, it's thinner than a pencil. Got it. THIS IS THE IPAD AIR 2. "Can you even see it?" Yes we can. So, it's thinner.

Tim would now like to talk about iPad. It's beautifully simple on the outside, but has a lot of powerful tech on the inside, apparently. Who knew? 225 million iPads sold so far. (Mini-whoop plus solid applause). iPads have outsold all products put together made by Acer, Dell, Lenovo.

iPad is number one in "customer sat" (isfaction). The Mini Retina has scored 100% customer sat (isfaction). How can that be? "Why are so many iPad users so satisfied?" Tim ponders. 675,000 iPad apps perhaps?

18:35 Mac owners: Yosemite is available from today and is free!

iPhone/iPad owners: iOS 8.1 is out Monday!

Craig keeps on saying "pree-sentation"! Similarly American, he's now talking to Steven Colbert, who's like the Alan Partridge of the USA. He's usually funny but this is pretty laboured. I mean, comedians don't get to design smartphones. Why should Apple executives get to play Ernie Wise to their Eric Morecambe?

Apple is doubling down on security. Craig is joshing now about lasers and a big vault door on Jonny's "lab". Any famous lady who's recently had their private pics hacked from iCloud will be delighted, no doubt! Ooh, he said "Pree-sentation". How adorably American!

18:26 They've obviously still not found the new iPads cos Craig and his hair are still restating various bits from the last keynote. iOS and OS X will work together more closely than ever, with Airdrop across both, and AirPlay without needing to be attached to your router. Pretty sure they've announced all this before.

18:21 Yosemite has loads of improvements too. Spotlight now searches the internet too. It's like Sherlock in OS9! Ah, remember Sherlock? No?

"Safari is literally six times faster than other browsers." As opposed to metaphorically faster. Mail is more functional than ever, though that's arguably not sayng much. Encrypted attachments up to 5GB. Ooh. Improved messaging app. iWork ditto. Nothing leaping out as killer apps here. Oh, "cool new txt effects" gets a mini-whoop and scattering of applause.

18:19 iOS 8.1 improvements are coming in response to "user feedback", ie: people shrieking"You broke my phone you bastards! Where's Camera Roll?!" Well, Camera roll is back. And photos and now videos updating across all your devices. First 5GB for free, 20GB for 99c and 50GB for er more than that. Sorry the graphic changed too quick. 20 bucks or something.

18:16 Craig has great hair. Really luxuriant and well conditioned. HealthKit has been a big kit, fingerprint sensor, Metal gives direct access to the power of the processor and GPU... Unparalleled visual fidelity, etc. Didn't they already do all this at the last event? Maybe they've lost the new iPads down the back of a sofa and Craig's been told to just keep yakking on while they look for them.

WOOP! Big woop there for the Unparalleled visual fidelity bit.

Where's Tim Cook from? He sounds bit like a less husky Bill Clinton. Apple Watch will ship "Early 2015". Tim's looking forward to it (applause). Us too! Together with Pay, the new iPhones, Cooky monster reckons these are the best Apple products ever. Well obviously. They're the newest Apple products ever. Anyway, here's Craig Federighi. He says nearly half of all Apple usersare on iOS8 already. KitKat's only achieved "25% penetration of the Android user base". In your face Android user base!

18:10 "A very personal device that can be worn right on the wrist." Acclaimed by "people who know about fashion…………………

18:08 Apple Pay goes live from Monday. "Apple Pay will be profound". Mmmm, Tim Cook has a very soothing voice. Pay will be accepted in McDonalds, Sephora, Staples, Chairish and some other retailers. No, us neither. It also works online!

18:00 Visuals on, whooping heard, lengthy promotional video showing cool kids (if you stretch the defiintion of "kids" quite a bit) buying iPhone 6es. Tim Cook is on stage saying "good morning", because he's in a different time zone. He reckons Apple Stores were the "best places on Earth to be" during the launch. Walt Mossberg liked the phone too, and that's not like him to praise Apple products. It's the fastest selling iPhone ever!

It'll be in 32 countries shortly including in China, where it'll be on 3 networks. It's the biggest launch ever!

Now it's Love Runs Out by OneRepublic. Possibly Apple is acknowledging that it has exhausted the love of its public and now can only watch from afar as the cool kids (with Android phones) enjoy life.

Cool Kids by Echosmith is the "on hold music" while we wait for BFG lookalike Tim Cook to mount the stage. It's a satirical song about longing to fit in with "the cool kids". What can we glean about Apple's intentions from this?

These pictures capture the raw excitement of what's afoot. They're from Gareth over at Tech Radar. He's in Noo Yoik, live, on the ground.

Hello and welcome to the Apple live event. Tonight, could we see an iPad Air 2 and an iPad Mini 3 with TouchID fingerprint security and cameras with a burst mode? Er… Yes we could.

So that's that then. Thanks for joining us, and see you at the next big tech launch. Goodnight.

No, don't go! We're just funnin' with ya. There'll be more to see, more Tim Cook banter, maybe there'll be an Apple plasma screen, or a pair of connected smart pants. There's only one way to find out and that's by watching as this news story magically grows before your eyes during the next 90 minutes or so, gradually filling up with facts, like a big fact bath that you've left running and then gone out.