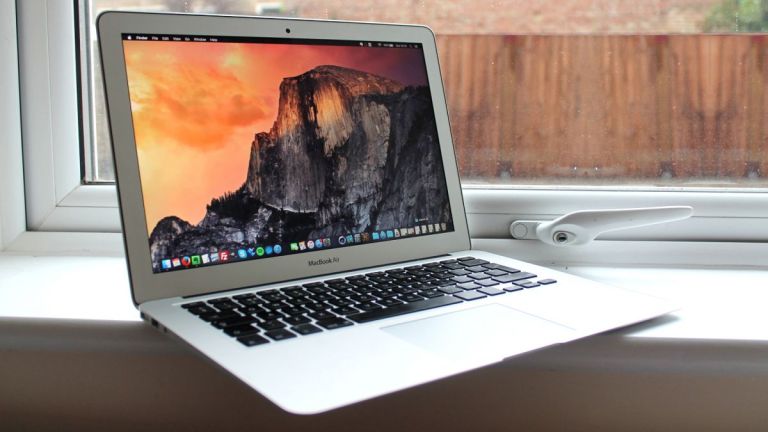 Now more than 10 years after it was first unveiled as the next-generation laptop you could fit in an envelope, the 13.3-inch MacBook Air is still on sale from Apple. It remains the cheapest laptop Apple offers, but is that a good enough reason to buy it?

The Air lost its status as Apple's most lusted after MacBook some time ago, though it did get a processor bump last year – even if the upgrade was to Intel's 5th-generation chips rather than the newest batch, it helped the Air from sliding completely into obscurity.

The laptop also got a small boost with its storage and graphics. The 11-inch model, meanwhile, was discontinued back in 2016.

As of January 2018, all MacBook Air 13-inch models come with 8GB of memory as standard. Meanwhile, the entry-level 12-inch MacBook and the 13-inch MacBook Pro both start at £1,249/$1,299, and both rival the Air in terms of thinness and lightness.

That's not much more money for better internals, a more modern design, and a vastly superior screen. Unless you're really working on a budget, the MacBook Air is looking rather dated.

The MacBook Air's design was revolutionary when it debuted in 2008, spawning countless imitators. Times have changed, and Apple's decision to leave unaltered for several years now has seen the competition close the gap. It's far from ugly, but the “wow” factor disappeared long ago.

One big turn off when it comes to the Air's design is its chunky bezel, which is thicker than the ones on its competitors. It's not helped by its metallic finish, which can prove distracting when watching movies compared to the thinner black bezels of its competitors.

The 13-inch MacBook Air also has an unusually large footprint compared to the XPS 13 and even the 13-inch MacBook Pro, meaning it takes up more space whether rested on your lap or on an aeroplane table. The one advantage there is that it has a protruding wrist rest on either side of the trackpad which makes typing for long periods of time a comfortable experience.

Aesthetics aside, the MacBook Air's build quality remains top-notch. Its unibody aluminium enclosure that forms both the Air's screen and body is durable, easy to clean and more than capable of taking a few knocks and scrapes.

If the 12-inch MacBook could be accused of introducing too many features all at once, the MacBook Air has the opposite problem.

Aside from its Thunderbolt 2 port, which has been upgraded from standard Thunderbolt, it's business as usual. Apple hasn't even carried over the 12-inch MacBook's innovative Force Touch Trackpad which made it into the company's new 13- and 15-inch MacBook Pro models.

Like its predecessor, the Air has a below-par display that tops out at a pixel-resolution of 1440 x 900. It also has the same number of ports, made up of two USB 3 ports, one Thunderbolt 2 port, a MagSafe 2 power connector and a SDXC card slot.

Thunderbolt 2, which ups data transfer rates to 20 Gbps (versus 10Gbps for Thunderbolt and 5 Gbps for USB 3), is a useful addition if you plan to transfer data between compatible peripherals or stream 4K video.

Arguably one of the best reasons to own a MacBook Air (aside from its superb battery life), its roomy, smooth glass trackpad and backlit keyboard remain unchanged from previous generations. The latter's keys still possess 1mm travel and a satisfying spongey typing action that, in the opinion of this reviewer, have yet to be bettered.

The MacBook Air's stereo speakers are poor compared to ones on the 12-inch MacBook, which despite being smaller are punchier with stronger mid-range and bass tones. As with the 720p Facetime HD webcam, they're good enough to get the job done but you won't be using your Air to fill the office with tunes on a Friday afternoon.

Switching from Intel's fourth-generation processor in the 2014 MacBook Air to its newer fifth-generation Broadwell one saw performance improve by 9% in our Geekbench test. It's an improvement on paper, but you're not likely to notice the difference in your day-to-day usage.

Overall though, the performance still won't let you down. Apps spring into action instantly and you can get away with opening more than 20 tabs while streaming 1080p video in the background without experiencing slowdown. Push it further by opening 10 or more apps, however, and you run the risk of the spinning flywheel making its presence felt.

A new MacBook Air can comfortably run macOS High Sierra too, so as far as the software goes, you're still on the latest version.

The 13-inch MacBook Air's speed is aided by its internal PCIe-based flash storage, which our BlackMagic Disk Speed test found to be twice as fast as the storage in last year's model. It achieved averaged write speeds of 612.4 Mbps, and average read speeds of 1,243 Mbps.

Those are impressive figures, as was the one achieved in the Air's battery life test. Streaming 1080p video over Wi-Fi, the Air managed a stunning 13 hours and 24 minutes.

The MacBook Air's sub-par display has the biggest impact on its usability. It's a shame Apple hasn't felt the need to upgrade it in all these years, particularly as the rest of the machine – from its keyboard and trackpad to its good all-round performance – makes it a delight to use.

The first problem with the display is its low 900p resolution. Most competing laptops in the Air's price bracket don't come with anything less than 1080p, with many packing 2K or even 4K-quality displays.

The result is a lack of space on the Air's desktop, which leaves little room for snapping windows side-by-side or using multiple apps at the same time. You'll often find yourself zooming out in browsers and spreadsheets to squeeze more content into view, so hooking it up to an external monitor for serious spreadsheet or other productivity work is essential.

The features in macOS can go some way to helping here. Mission Control lets you set up multiple virtual desktops and allocate apps to certain zones, effectively broadening the desktop area you have to work on. It's also possible to set up hot corners allow quick access to the desktop, Mission Control or the Notification Centre by scrolling into the screen corner.

The best MacBook deals you can get today

The MacBook Air is unexciting and not as fashionable as it once was, but its excellent battery life, decent performance and good selection of ports make it worthy of your consideration for another year... just about

Though it doesn't quite pack the power of a MacBook Pro, Intel's latest processor and faster storage make it a genuinely nippy machine that handles day-to-day tasks with ease. For owners of compatible peripherals, Thunderbolt 2 is a useful addition.

As usual, it all comes at the expense of a cramped display. If you can't cope with its lack of pixels and don't plan on using an external monitor, that alone should be a reason to give it a miss. You should also consider how much more future-proofed your purchase will be if you plump for a MacBook or MacBook Pro instead.