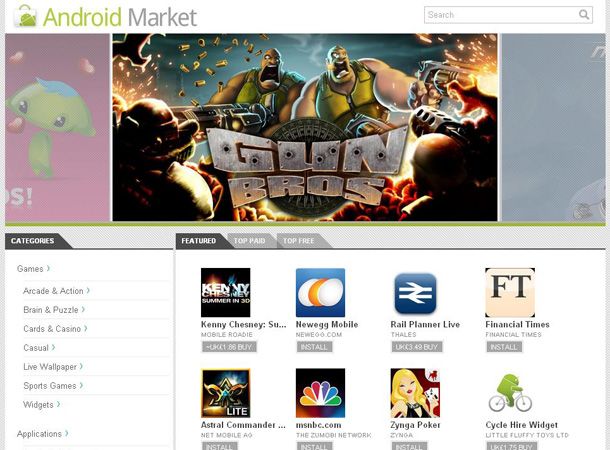 PlayStation Suite for Android incoming
In a landmark week for the iPad, The Daily newspaper has finally left the digital printing press following a saga more drawn out than Fernando Torres leaving Liverpool. The News Corp Apple hook up is the first publication produced exclusively for the iPad. Is The Daily going to change the way you consume news? No iPad? Fear not, you can read it for free everyday thanks to this lovely gratis loophole

Android 3.0 opens doors for top apps
The worry about Android tablets has been the distinct lack of specifically-designed apps, but that's all about to change thanks to Wednesday's launch of Android 3.0 Honeycomb, which promises to be a godsend for app developers. Bubble widgets will display different layers of content on the homescreen, app fragments will give apps a new sense of usability, while YouTube looks great with the 3D graphics

NIntendo DS games on your Android?
It's getting better, but Android just doesn't offer the top-level marquee games that the App Store does. So how about throwing a Nintendo DS emulator into the mix? Beta app Tiger Lab shows the possibilities with this proof-of-concept app that allows you to play your ROMs on your Android phone. Beware, it's a very, very early prototype, though.

Android Market web store
It has been a massive week for the Android Market. The announcement that Google was finally launching a web store for it's Android Market was a more footnote in the Honeycomb presentation, but an important one at that. Now Android owners can install apps on their phone directly from their computers, with no cables. Hooray!

A five star Windows Phone 7 game
The Windows App Marketplace is developing quite nicely, with a host of top level apps scoring highly. The Impossible Game is the latest app to excite our team of app reviewers. It's a simple game, but no matter how skilled you become, you'll still need up to 100 tries at each level. Sound infuriating or illuminating? Give it a try.

Smartphone apps saved the radio star
TuneIn Radio has been tearing up the competition across multiple platforms and now it debut's on Android ready to do the same. With access to the web streams of thousands of stations worldwide and a smashing interface, it's really a no brainer. Get your BlackBerry tuned in with a free download

FIFA 11 scores on the iPad
Remember the days when EA's FIFA franchise was to ProEvo what Emile Heskey is to Didier Drogba? Well those days are gone, with the behemoth spreading out to the iPad. As a straight comparison to the console giant it doesn't quite match up, but you won't find a better footy sim app than FIFA 11 on the iPad.