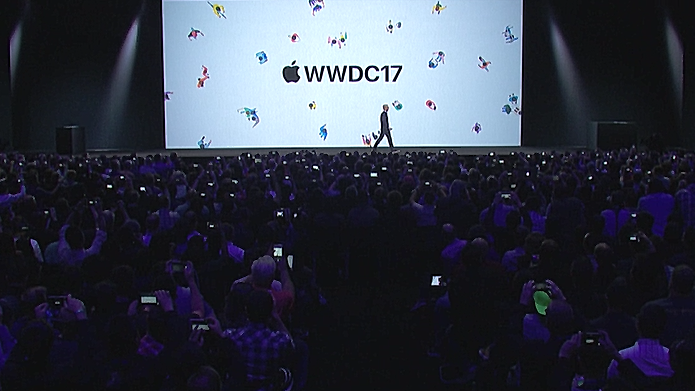 Apple's WWDC is tonight, the Worldwide Developers Conference that Apple holds each year. The clue's in the same: this is mainly aimed at mobile and desktop app makers, and Apple usually announces updates to macOS, iOS, tvOS, watchOS and maybe more.

Despite its geeky origins, it's of interest to the rest of us, as we get to find out about the new features coming to our iPhones and MacBooks over the next 12 months - and there might even be a surprise or two in store. Here's what we might see on the 5th of June.

As usual, Apple will be live streaming its developer conference on the events section of its website.

For this to work you'll need to be using Safari on the Mac or iOS or Microsoft Edge on Windows 10.

You can also follow of the the action right here on T3.com, of course.

Traditionally, WWDC is usually about software updates, but Apple has occasionally launched hardware in the past - and most of the juiciest rumours surrounding this year's event are focused on potential new devices.

At the head of the queue is the Siri speaker, a device that may or may not exist, but which insiders say will be taking on the Amazon Echo and Google Home in the very near future. Apple could talk about third-party integrations with Siri at the same time, so it would kind of make sense to do the reveal at WWDC.

Also on the slate, the speculation says, is a new 10.5-inch iPad Pro. Based on the whispers we've heard so far, Apple is planning to slim down the device bezels so the new tablet is the same physical size as the original 9.7-inch iPad Pro, but with a larger display.

If that's not enough for you, yet more rumours suggest we're going to see new MacBook and MacBook Pro models at WWDC 2017 - these will be minor updates though, with improved specifications under the hood thanks to Intel's seventh-generation processors. Maybe even the creaking MacBook Air will get a refresh as well...

Last year OS X was rebranded as macOS, but it's unlikely anything so dramatic will be unveiled this time around. In fact it's hard to think of any potential new features in macOS that would really raise eyebrows - except perhaps support for iOS apps, which Apple has never shown any sign of seriously thinking about.

What we will see is a new version of macOS, with a new name (your guess is as good as ours), and a bunch of incremental updates for the operating system and the apps that run on top of it.

At the moment the rumours are suggesting that FaceTime for the desktop might get support for group calls, so you'll be able to hold a video call with more than one person - Apple's competitors offer the feature, so it makes sense that it would even the score.

Siri got added to the desktop last year and we think it's likely that Apple will have devoted a serious amount of time to developing it over the last 12 months. Look out for more Siri features, better integration with macOS as a whole, and maybe a merger with the Spotlight universal search tool.

If Apple sticks to its predictable naming scheme then we'll be getting our first look at iOS 11 on the 5th of June, and one of the more persistent rumours we've heard is that more iPad-specific updates are on the way - what they are we're not sure, but it would make sense if there's a new device coming as well.

We've heard rumours that FaceTime will get upgraded on iOS as well as on macOS, and some have predicted that FaceTime Audio is about to become the default way of making calls on an iPhone. Considering Apple just bought sleep monitoring firm Beddit, we might also see some extra sleep tracking features, though it's perhaps still a bit too soon.

Respected Apple tipster Mark Gurman says iOS 11 is going to be rocking an upgraded interface as well - we haven't seen any major visual overhauls on iOS in a while, and if Apple does have a new look in the pipeline, the tenth anniversary of the first iPhone would be the perfect time to show it off to the world.

Then there's all the usual upgrades we get every year: improved battery life, smarter responses from Siri, plus tweaks to all the apps that come installed alongside iOS. Even if we don't get any major improvements to apps like Mail, Maps, Contacts and Calendar, iOS 11 should be the most powerful and most capable version of the mobile OS yet.

Apple's operating systems for the Apple TV and the Apple Watch will also be getting some new features at WWDC, though don't hold your breath for anything game-changing. One interesting bit of gossip says tvOS will be getting support for multiple users, so all the binge-watching the kids do doesn't have to interfere with the adults' apps.

For a while we've been hearing rumours that the Apple TV will turn into a fully fledged smart home hub, and in this respect tvOS 11 might lay the groundwork for a new Apple TV device later in the year. If that brings with it 4K playback then we might also see signs of this in the new software.

And what about the upcoming watchOS 4? There's been little to talk about on the Apple grapevine but it's a reasonably safe bet to say any new software is going to bring with it improvements in battery life and the wearable's standalone functions.

We might also see an always-on mode of some description introduced, as this is one of the few areas where the Apple Watch still lags behind its Android Wear counterparts. Native sleep tracking has also been mooted by those in the know - but as with everything else at WWDC 2017, we'll just have to wait and see.