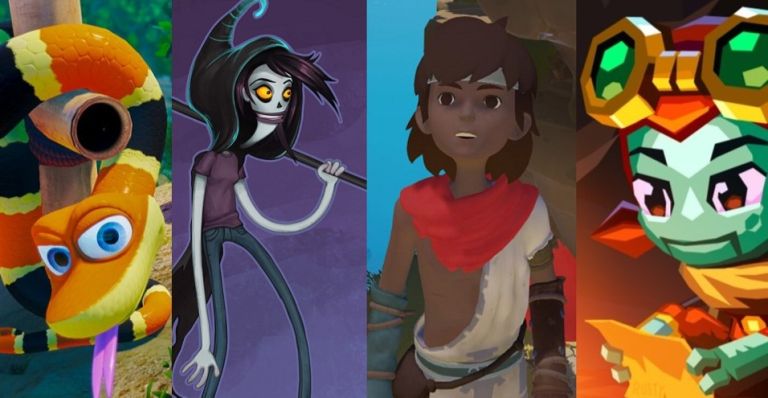 Nintendo Switch is set to become the new home of indie game in 2017 and beyond. Here are some of the best and brightest you need to own...

Earlier in the year, Nintendo revealed over 60 indie titles are coming to Nintendo Switch in 2017. A hulking great number that's already helped the BigN's new console feel far more substantial in the software library stakes than Wii U ever did.

But with so many titles on the horizon - and with so many genres and subgenres making an appearance - it's easy to get lost amid all that independently-developed goodness. So we've picked 10 of our favourites to get your diary filled and your wallet quaking in your pocket.

Once a Sony-published PS4-exclusive, the brightly-lit platforming and environmental puzzles of RiME have now gone multiplatform - which is great news for us Switch owners.

Deadlight developer Tequila Works is the indie studio behind it, a studio that's seemingly drawn on its Spanish home to create a beguiling Mediterranean setting. RiME will combine tower defence, platforming and crafting all into one enchanting little package, making for one of the most exciting titles coming to Switch in 2017.

The original SteamWorld Dig, with its robo-western setting and tongue-in-cheek humour, made its way to both 3DS and Wii U so it's great to see its much anticipated sequel is coming to Switch.

Set for a release later in the summer, SteamWorld Dig 2 looks set to continue on the original's addictive formula of action-adventure, platforming, digging and exploration. The more linear gameworld of the first game will be traded for a much larger locale, conjuring more of a Metroidvania feel to its bigger campaign.

With a bright colourful style that reminds us of the equally platforming-centric (and soon to be released) Yooka-Laylee, Snake Pass comes from another talented indie studio, Sumo Digital.

It's a puzzle platformer affair, only rather than your traditional platforming mascot you solve said conundrums and explore the gameworld with the mechanics of a slithering reptile. With 15 levels spread across four worlds, Snake Pass looks like a cute slice of family friendly fun.

You know you're going to get something suitably off-the-wall when you play something by Zoink Games - this is the studio that brought us Zombie Vikings and Stick It To The Man after all - so we're looking forward to be freaked out yet again with the black humoured Flipping Death.

Channelling a very Discworld-esque twist, you play Penny, a girl forced to take over the duties of Death while he's on vacation. You can flip between the world of the dead and the world of the living at the touch of the button (the game literally flips like a page), leading to some unique platforming/possession shenanigans.

When it comes to tying into the local multiplayer couchplay Nintendo is trying so hard to promote with Switch (hello, 1-2 Switch), you couldn't ask for a better fit than the wonderful culinary madness of Overcooked.

The Switch-based Special Edition will come will the full game - where you work against the clock to prepare orders in a frantic kitchen - plus all the expansions released thus far. Developer Ghost Town Games has also teased support for Joy-Con's unique HD Rumble feature.

Stardew Valley is one those rare games designed out of an enduring love for a classic series - in this case, Nintendo's own Animal Crossing - that creates a new experience that's just as good (and maybe even - whisper it - a teensy bit better).

The much-lauded farming sim-cum-RPG is indeed coming to Switch and it's going to be the first console to showcase the game's new multiplayer function (where two players can team up to till the land together).

The original Escapists, with its top-down view and plan your own prison break setup, became something of a cult hit when it first arrived on PC, so we're expecting big things from the series' Switch-bound sequel.

It'll support drop-in/drop-out co-op for up to four players, with even more ways to plan your escape. You'll now you'll be able to tie together knotted sheets and use them to climb down high windows in new multi-level prisons, and so much more. It's a perfect fit for Switch's handheld power so this is a must have.

One of the most anticipated games of 2017 (and one of the biggest videogame crowdfunding campaigns ever), Yooka-Laylee promises to recapture that magic that made the traditional 3D platformer such a staple in the N64 and PS1 era.

While the Switch version has yet to be given a solid release date, Playtonic Games has suggested it'll launch soon after it hits PS4, Xbox One and PC brethren in April. Expect colourful worlds full of black humour, endless collectibles and a whole lot of jumping and gliding across those aforementioned platforms.

The first game to be announced as a Switch exclusive, the charmingly beautiful Seasons of Heaven comes from indie French studio AnyArt  and is based on a little-known novel of the same name.

Running on Unreal Engine 4, the game follows the story of Yann, a young boy with Asperger's syndrome, and Ani his French bulldog. Like most games these days its set in post-apocalyptic world, but considering the quality of the screenshots we've seen so far we're hoping for something that's more Fable than Fallout.

Toejam and Earl: Back in the Groove

Another retro game revival that found success in crowdfunding land, Toejam and Earl: Back in the Groove brings the MegaDrive/Genesis duo back from sequel mediocrity and returns the series to the isometric puzzle-collecting exploration goodness that made the original game such a classic.

With nine different playable characters, and four-player cooperative gameplay, Back in the Groove could be the back-to-basics template that puts the '90s duo back on the gaming map.