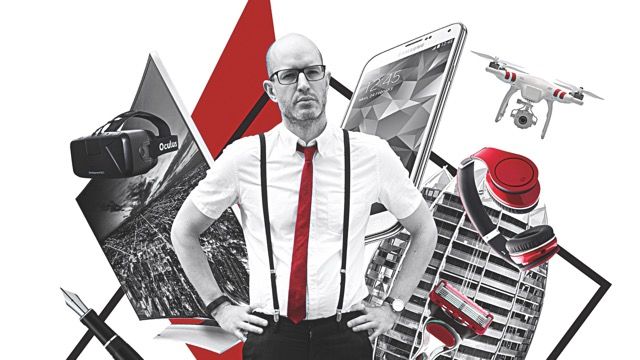 Doesn't tech often seem like a ridiculous, frivolous and trivial thing, albeit extremely fun, and with an altogether surprisingly large quantity of well-oiled, rock-solid male pecs and pert female bosoms?

I found myself musing exactly that this month, while attending the launch of a smartwatch for beach-volleyball players that rated how well they high-fived each other.

However, there's another, even more inspiring, side to the business that we call tech. Also this month, Dyson, that fine purveyor of fans that look like sculptures, and vacuum cleaners that look like purple ray guns, announced the winners of its James Dyson Award for aspiring engineers.

Then there was South Korea's Min-Kyu Choi, a Royal College of Arts alumni and inventor of the fold-up plug.

And then there was me. I turned up soaking wet, having got lost while cycling there at 7mph on a Boris Bike.

The brief for the James Dyson Award is basically to invent something life-changing, whether that be a neat consumer product or something that feeds the unfed and helps the disabled to become, er, abled.

Generally, I just get to see phones that are like the old one but with a smaller bezel, so it was refreshing – humbling, even – to be asked to wade through scores of product concepts and prototypes that did a hell of a lot more.

There was everything from a new type of polo helmet – existing ones don't protect players' heads very well, it seems, which might explain the Royal Family's IQs – to nothing less than a bid to save the human race from diseased decline.

As it turned out, the judging team worked pretty well. The prof and the inventor provided actual expertise and knowledge, while I was able to point out which products already existed – it really is hard coming up with something truly new – and which ones were complete pie in the sky.

Some of the latter were amazing in their own right. There was a skiing top that was meant to set rigid if you had a crash and broke your spine.

This sounded super-cool – and looked it in the design sketches – but seemed not only impossible but also liable to make your injury worse.

There was also a musical instrument for the deaf. This involved strapping seven small fans to yourself and was probably the craziest thing I've ever seen. Oh, and there was a sweatband with wires coming out of it.

You get even more of an idea of the sheer scope and life-affirming quality of the James Dyson Award's entrants from our eventual favourites.

First up was Ross Whillis's Less Leaves. This is – YES! – a device for picking leaves off gravel, and won the informal 'First World Problem' prize. It was probably the most fully developed product of them all, it clearly works and, hey, it picks leaves off gravel, man. What have you done?

At the other end of the scale was Vidhi Mehta's rather more utopian Post/Biotics. This aims to crowd-source new antibiotics by sending us out into the world's gardens and rural areas to plonk plant samples in petri dishes containing bacteria. The results can then be uploaded for “peer review”, with the most promising ones – where the petri-dish results appear to show that rhododendrons kill syphilis, or whatever – being looked at by actual, real-life scientists.

Then there was a new type of U-bend that removed fat using something called “nano-polymer-coated filters”. So, hello biofuel and goodbye “fatbergs” in the sewers. Who wouldn't want that?

Sam Jewell's Giraffe Reader was the most ingenious invention of them all: it's essentially a fold-up, cardboard tube that helps the sight-impaired to read. You put your smartphone on it, and it positions its camera at the right height to get an in-focus photograph of a sheet of A4. The scanned documents can then be read by text-to-speech apps on your handset.

But the UK winner was Open Bionics' 3D-printed robot hands for amputees. This is a remarkable example of taking an existing product and making it both better and cheaper.

I would say I'd give my right arm for one, but that would be inappropriate. For more, go to jamesdysonaward.org.