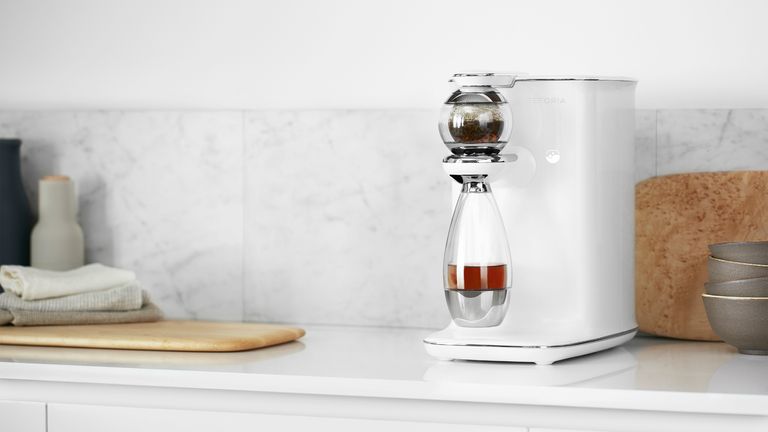 You may always choose a cup of earl grey in the afternoon, or a particular pint at happy hour, but there are a host of futuristic ways in which to enjoy your favourite beverage. Robotic bartenders straight out of a sci-f film now serve up cocktails on cruise ships and you can buy powdered alcohol and coffee (although it isn't recommended). But if you prefer your drinks less extreme but future-facing there's an array of gadgets you can buy for your home, from a smart kettle that promises to make your brew taste better, to a sonic wine decanter and even a Star Wars butler.

Dr Who may have a sonic screwdriver, but for making 'every wine taste better', there's the Sonic Decanter. The gadget uses technology originally designed for use in space (apparently). Users simply have to fill the machine with water then insert a bottle of wine, selecting whether it's white or red. The decanter then blasts the booze with ultrasonic soundwaves for 25 minutes to modify its chemistry by breaking down preservatives as if ageing it for years. This makes even dodgy bottles of cheap plonk more aromatic, flavourful and softer with fewer tannins for 'an amazing lingering finish', according to the company behind the gadget.

In lieu of a robotic bartender as seen in Futurama or on the latest cruise ships (yes, really), there are a number of apps that are claimed to be able to pick the perfect wine. Vivino uses image recognition so thirsty users can take a photo of any wine bottle to learn about it. To avoid taking a lousy bottle of plonk with a pretty label to a dinner party, it can scan a shelf in a supermarket to show users ratings of wines as they walk along, and in a restaurant, can instantly rate the selection on a wine list.

Eating food in the form of a pill and inhaling drinks is a common feature of futuristic societies described in sci-fi novels. And while the three course meal in a capsule may not yet be an appetising reality, inhalable alcohol is a thing (for better or worse). The Vapshot machine injects a fine mist of spirits into specially designed pressurised containers. Partygoers can pop the top of the bottle to inhale the alcoholic mist in what is described as an 'aromatic and pleasant experience'. The company behind it claims the machine provides a 'responsible way to enjoy alcohol beverages' and a Vapshot one-litre serving will give a breathalyser test of less than 0.05 per cent.

People have been drinking tea for more than 4,000 years and it's likely we could well sip Earl Grey on the moon one day. For afternoon tea with a twist, there's a smart infuser that knows the exact time, temperature and water needed to brew the perfect cup of tea (for a price). Called Teforia, the sleek-looking machine uses Selective Infusion Process (SIP) technology to determine the best brewing method for different teas. Users simply pop loose leaves into the infusion chamber and add the amount of water they would like, then use the companion app to start the four-minute brewing process and tweak the tea to their taste. The system lets them adjust the various properties of any tea and create their own recipes with custom caffeine levels, antioxidant levels and flavour and aroma notes, according to the company behind the gadget.

This wine gadget may not come from the future but it could save you from a headache the morning after overindulging on wine. The Üllo Purifier is claimed to restore the natural taste of wine by filtering out sulphites used as an artificial preservative. Polymer technology in the filters is said to remove the free sulphites' bitter taste, allowing other flavourful compounds in wine to flow through unaffected. The result is a more 'pure' glass of wine that some people swear produces less brutal hangover headaches than wines with more sulphites (although there are no scientific studies that really support this).

This Thermos flask may not be as magical as those in Harry Potter, but while it doesn't hold a transformative polyjuice potion, it is 'smart'. The Thermos Connected Hydration Bottle

has a 'smart lid' that measures how much water – or any other liquid - you drink while providing temperature readings. It syncs with a free iPhone app to show users their progress and measure it against their hydration goal. The data is transmitted thanks to a Bluetooth connection and can also sync with a Fitbit.

From video chat and mobile phones to the surveillance state, there are plenty of predictions sci-fi writers have gotten right. But few could have predicted that grown-ups would be choosing often unpalatable juices over a glass of wine in 2016. While the market for bottled juices and organic veggie boxes in the post is crowded, one Californian company has launched a table top alternative called the Juicero. Its Wi-Fi enabled cold-press juicing machine works with special pouches containing fresh fruit and veg that are then squeezed by the gadget. With each pouch costing $4-10 dollars, it's not a cheap option, but then again, there's also no washing up required.

A porthole for the kitchen

The Porthole may suggest a tear in the spacetime continuum but infact it's a stylist piece of kitchen kit for creating cocktails, flavoured oils, dressings, lemonade and coffee. Users can arrange their chosen ingredients laying the device flat on a table, before sandwiching them between two panes of glass. They then add liquid and wait for the flavour to infuse, to make anything from lemon-flavoured vodka to garlicky oil for cooking.

With space tourism expected to take off in the coming decades, it makes sense to find a way of having a celebratory drink while looking down on the Earth. There was a Kickstarter campaign for a zero-gravity martini glass and Ballantine's whisky brand debuted a space glass. Made of 3D printed plastic, the prototype has a spiral convex base plate to create surface tension and hold the whisky in a reservoir at the bottom of the glass. A helix channel up the side carries the whisky into the mouthpiece. Perfect for a recreational stay in a Martian hotel or for saying cheers to the demise of the Death Star.

Your own droid butler

From projecting holographic help messages to busting open Imperial doors, there's nothing R2-D2 can't help with and in one Star Wars scene, even acted as a robotic butler. Now, there's a remote-controlled life-size version of the droid that's actually a fridge. Users can command R2 to bring them a chilled beer or wait on guests at a party. Made by Haier, the droid also comes with a projector – no Princess Leia message included – and mimics R2-D2's voice, head motion, lights and speed. The only problem is the steep price – topping £8,000 or 131 Galactic Credits. But for the thifty Star Wars fan there's an adorable Death Star ice cube mould for Imperial drinks.