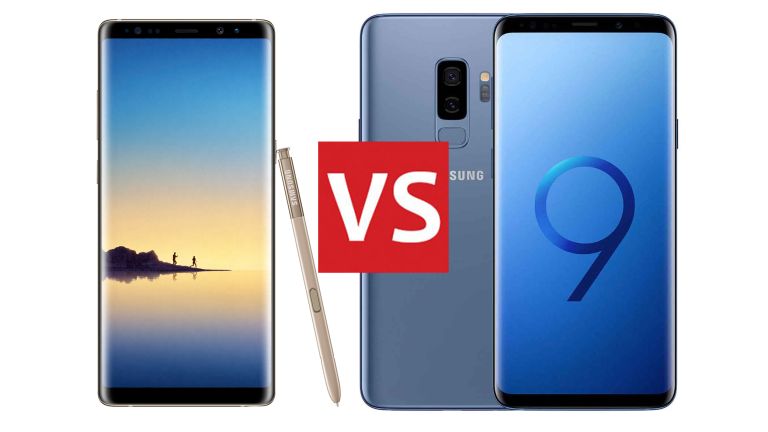 The relationship between the Galaxy S9 Plus and the Galaxy Note 8 is rather like the one between the iPhone X and iPhone 8 Plus: in many respects there’s very little to choose between them. Big screens? Check! Dual cameras? Check! You could be forgiven for thinking the only real difference is that only one of them packs a pen. And to an extent you’d be right.

However, there’s a bit more to it than that. While Samsung now has two very similar flagships there are some important differences between them. Let’s discover what they are.

There’s a lot packed into the Note. You get Samsung’s much-loved S Pen stylus, a fingerprint scanner and heart rate sensor and that big screen, all wrapped in a waterproof (IP68) shell. It’s almost all screen from the front and looks reassuringly tough and expensive from other angles.

The S9 Plus doesn’t look much different, because it isn’t – although the fingerprint sensor has been moved so the camera strip on the back is now vertical rather than horizontal like the Note. And of course, there’s no pen. But there’s another design change that isn’t visually obvious, and that’s the new speakers. They’ve been tuned by speaker experts AKG and offer 360 degree Dolby Atmos with any sound source.

On its launch the Galaxy Note 8 boasted one of the very best displays ever installed in a mobile device, with 6.3 diagonal inches of Super AMOLED gorgeousness, Always-On notifications and an aspect ratio of 18.5:9. It’s Quad HD with a resolution of 2,960 x 1,440.

The display in the S9 Plus is almost identical: the same resolution, the same Super AMOLED colour range but a very slightly smaller size of 6.2 inches compared to the Note’s 6.3. That means a very slightly higher pixel density but if you can tell the two displays apart your eyes are much better than ours, or you’re a great big fibber.

The Note 8 comes in two versions, one with a Snapdragon 835 and the other with Samsung’s own Exynos 8895. Both processors are octa-core and very, very fast. Both versions are available with 64, 128 or 256GB of on-board storage plus the obligatory microSD slot.

It’s the same story with the S9, but the octa-core processors are newer, more efficient and even faster. The US and China get Qualcomm’s Snapdragon 845 and the rest of the world gets Samsung’s own Exynos 9810. Both flavours of S9 Plus come with 4GB of RAM and a microSD slot and Samsung offers 64GB or 128GB of internal storage.

The Note 8’s front camera is 8MP with an impressive f/1.7 aperture for low-light shooting. The main camera is a 12MP dual-lens setup with f/1.7 on the wide-angle lens and f/2.4 on the telephoto lens, which also has 2x optical zoom. The rear cameras have optical image stabilisation. Video goes up to 60fps for 1080p HD, or 30fps for 4K.

An f/1.7 aperture is good, but f/1.5 is gooder – and the Galaxy S9 delivers that through its own dual-lens setup. It also has significantly improved image noise reduction, automatic motion detection and superb performance in both low and normal lighting conditions. Meanwhile the selfie camera offers what Samsung calls AR Emoji, animated 3D emoji that you can virtually dress and that can mimic your own movement.

The Note 8 ships with Android 7.1.1 with the usual TouchWiz enhancements, but the most significant feature needs hardware in the shape of the S Pen. The pen isn’t just a gimmick: it’s baked into the entire system, whether you want to annotate documents, scribble directions or just access app shortcuts. The people who like it love it, with good reason.

The S9 Plus has Android 8.0 Oreo, an improved Bixby with live translation, local information and even calorie counting and a new SmartThings home automation app. But it lacks the S Pen, which means the Note is the better device for scribblers and stylus fans.

Let’s face it, if you’ve just bought the Note you’re not in the market for the S9: the former only came out a few months ago and there simply aren’t enough improvements to make upgrading a wise financial choice. However, if you’ve been hanging on or just feel ready for something new, both devices are very compelling. The difference really comes down to the pen: if you want one, buy the Note.

And then there’s money. The Note was GBP £869 in the Autumn, but it’s widely available unlocked for a lot less than that after a few months on sale. We’re expecting the S9 Plus to come in £10 more expensive at £879, and it’ll be a while before the discounts appear. If you need a Samsung phablet and you’re not willing to wait for the prices to come down then that might make the Note 8 the better buy.