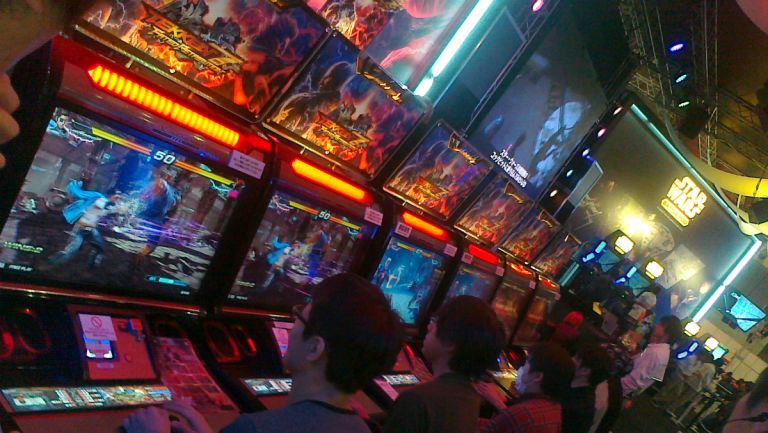 There is no doubt that arcade games have always been, for the hardcore gamer, the ultimate experience for play. They were for decades the go to gaming experience, however despite the mid-2000's seeing gambling machines gradually replace all the latest arcade videogames made by Sega & co. in pubs and entertainment complexes across the country, the industry remains alive and kicking. And, as T3 discovered at the JAEPO 2016, it is still packing a strong and unique punch.

So, what's hot this year arcade-wise?

Well, the game that stole the show at this year's expo has undoubtedly been 'Fated Retribution', the latest Tekken 7 upgrade in which Capcom's Street Fighter characters have come into the Tekken roster, plus general improvements have been made to many features introduced last year at the launch of the 7th installment.

Following closely behind Retribution has been Sega's 'Wonderland Wars', a multiplayer game that integrates a 45-degree, 16:9 big touch screen with a pen and an analogue controller in which the main goal is to move your soldiers and conquer the enemies' castles. Sounds pretty simple right? Well it is, however when you get down and play it, it is incredibly intriguing and has surprising levels of depth.

Indeed, Wonderland Wars is a clear example of the forward enhancement started by Japanese arcade manufacturers from the beginning of 2000. Over this period video trading card games like 2006's World Championship Football have taken physical trading cards and replaced them digitally, so that a single electromagnetic plastic card now keeps all the cards' data and credits (money) of every single player (one of the most notable examples being the 'Banapassport' introduced by Bandai-Namco in 2013).

Wonderland wars probably is today the peak of the arcade experience in Japan, integrating the most sophisticated gaming technologies available together for a non-replicable experience at home. It is a unique experience that is not delivered on any home console or PC.

Last but not least we have Mobile Suit Gundam: UC Card Builder, a novel card game that still uses a trading card system (255 to complete the set) and is operated by placing game cards on a sensitive (now finally backlighted) battleground. On this battlefield you can move your robot troops by the use of your own hands and destroy the opponent regiment. Again, this level of interaction by the game's user is unique and not delivered by the home console market.

Interestingly, Mobile Suit Gundam: UC Card Builder was originally developed in 2005 with the first generation of the anime franchise but, after a very long hiatus, it was surprisingly updated this year with new high definition monitors, touch screens and the latest robots of the insanely popular anime series.

Of course, there was plenty of other exciting new gaming tech on display at the show too, with a strong presence from the rhythm game genre as well as others. Rhythm games have been pretty popular even here in Europe during the last decade, however in the land of rising sun they remain incredibly popular and each brand this year has upgraded their killer applications for the event: Sega with Mai Mai Pink, Konami with the new Guitar and Drum Mania and Taito with Groove Coaster 3.

This genre started at the end of the 90's with the well known 'Dance Dance Revolution' by Konami, however now these systems have evolved so that they are a more complex, involved experience. Right now the genre has developed to a point where it is hard to determine where one ends and the other begins - the music and gameplay being so tightly fused.

For a taste of what these titles are delivering but at home you could check out 'ReZ', a concept-game made in the early 2000s on the Sega Dreamcast by the father of `Sega Rally` Tetsuya Mizuguchi. Since then many other game directors have taken inspiration from Mizuguchi's game and right now many arcade games in Japan integrate the same rail shooter that is tightly linked to a curated soundtrack aspect.

A modern example is Groove coaster (now at its 3rd update at the JAEPO) where the player guides a Taito-brand space invader through the level in accordance to a banging sound track. A must to see and play!

Wrapping up the show was Capcom's arcade version of the stupendously popular anime 'Attack on Titan', which since the show was launched in 2013 has been a massive cash cow. This new game has invigorated the shooting game genre with both double guns and analogue controllers on each one of them, creating an interesting interaction between both due to the fact that they can be linked to upgrade into a single weapon or specific feature of the character the user plays.

In general, conceptually `Attack on Titan`reminded us of another Capcom blockbuster, Monster Hunter, in which the main target of the player and the guild they are part of is to collaborate to kill one single mega monster and reap loot and rewards.

Overall though, it was another interesting and lively year at the JAEPO, with a vibrant community and industry still innovating and delivering unique, arcade exclusive, experiences to the gamer.