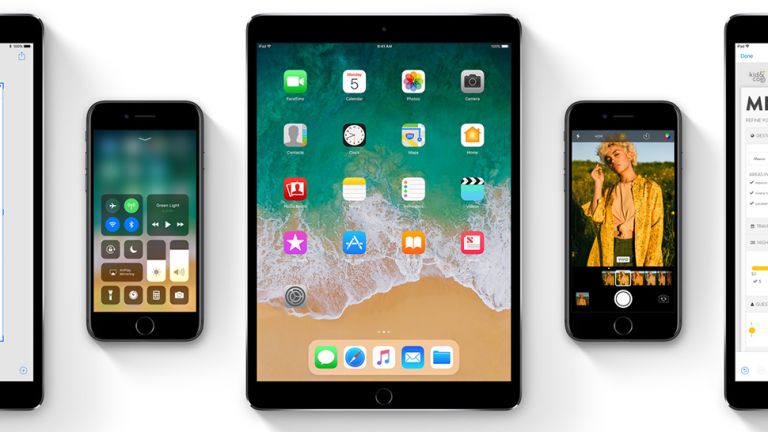 Today marks the full release of iOS 11, and these are the improvements to look out for.Apple usually packs a stack of exciting new features into its mobile OS and the apps that run on top of it for us to enjoy. 2017's release is no different:

The Control Centre has a brand new look for iOS 11, and you can find it as usual by swiping up from the bottom of the screen. The overlay gets more customisation options too, which means you decide which toggle switches are shown and which ones are hidden from view.

All of your Messages conversations are automatically synchronised with iCloud. That means now, when you sign into a new device, it’ll transfer all of your old messages over. This will save memory on your iPhone, as only the most recent messages are saved locally.

3. Do Not Disturb while driving

In iOS 11, the familiar Do Not Disturb mode can be set to kick in when you're driving - iOS can detect this based on your movement or on a connection to a Bluetooth device. Incoming notifications are silenced, and the screen stays dark, so as not to distract you.

4. Pay your mates with Apple Pay

You can now send a contact money, directly, with Apple Pay in Messages. It’s really simple, just open the app in Messages and enter the amount in the slider, then authenticate the payment with your fingerprint.

Like Do Not Disturb, Screen Recording is one of the new toggle switches you can add to the Control Centre (head to Settings to do this). For the first time in iOS, it allows you to record activity on the screen and save the resulting video straight to your device's Camera Roll.

6. Camera quality is improved and images take up less space

First of all, images and videos are better compressed, so they’ll take up less storage space on your iPhone. That’s great news for anyone who’s a bit snap happy.

Apple has also improved image quality in portrait mode, making it slightly better in low light, and app developers can use depth API, to use it in their apps.

You can now play around with Live Photos. Changing basic things like trimming the length, automatically looping them, and selecting the keyframe.

The Files app is new in iOS 11, finally opening up the file system on the mobile OS just a little, as well as acknowledging the improving features in iCloud. You can browse through files stored on the device, as well as files and folders synced across from other devices.

The Photos app now uses machine learning to automatically create memories (Albums) based on time and location. It’ll also learn what’s in the images, like a dog, for example, and create memories around that.

As well as giving users a Files app, iOS 11 also offers more options for optimising the amount of available storage. Choose iPhone Storage from General in Settings to get some suggestions about photos, apps, videos and other content you can safely get rid of.

Apple Maps will now give you more details about your location, well, if you’re in the US that is. Once you arrive at a mall “moll” or airport, Apple Maps will give you an internal map of the building.

This is US only at launch, and will roll out over time.

This one’s super useful. The iPhone, with Apple Maps, is now a much better sat nav replacement, with Speed Limits and Lane Guidance information when driving.

iOS 11 includes a developer tool called ARKit, which is going to enable all kinds of augmented reality magic using the camera on your iOS device - from seeing how 3D furniture looks in your living room to playing AR games on your kitchen table.

Siri is getting smarter in iOS 11, as it tends to do every year.

Siri’s voice is more natural and expensive. So it’s not like you’re talking to a robot, and more like the film Her.

You can also get it to translate languages. For example, you can now ask, ‘how do you say hello in Spanish’, and Siri will speak the answer for you. At launch you’ll get all of the biggest, hottest languages, including English, French, German and Chinese.

And, the virtual assistant will now take context into account when it’s suggesting content. Essentially, it’ll try to learns what you’ll want next. For example, it’ll have your commute and the weather ready when you wake up. It’ll suggest an Facebook if you always wake up and check Facebook.

This is synced across all devices.

14. Do Not Disturb While Driving

This is a great one for safety. You iPhone will use Bluetooth or WiFi to detect when you’re driving, and will suggest you turn on the Do Not Disturb While Driving mode. This turns off screen and will not give you notifications.

You can set it up to automatically send a text to people telling them that you’re driving, and it’s easy to turn off if you’re passenger.

Photos gets a few tweaks, with a nod to Instagram - you can now turn your Live Photos into video loops, or get them to bounce back and forth, or create a long exposure. The Camera app gets more filters as well.

Using AirPlay 2, Apple HomeKit will now allow you to create multi room audio setups in the Home app. This includes using your television and the Apple TV as an audio device.

Safari gets some tweaks in iOS 11 as well - start a search from the address bar, for example, and you'll get some suggestions based on what you were just reading. The Apple browser can also link to your iOS Calendar app, adding entries for flights and hotel stays instantly.

New to Apple Music are people profiles, so you can show off your own taste in music through playlists you've decided to make public, as well as follow your friends and see what they're listening to. It's all very - dare we say it - Spotify-esque, but it's helpful.

iOS 11 is a particularly exciting update if you're an iPad owner - you're going to get a Mac-style dock at the foot of the screen, support for dragging and dropping app windows around the screen, plus a few other extras to make using it more like using a laptop.

The App Store gets a much-needed visual revamp, making it easier for you to discover the best new apps of the moment as well as improving the navigation experience in general. There are now separate tabs for games and for notable apps picked out by App Store staff.

The iOS 11 release date is September 19.

Liked this? Here's how iOS 11 matches up against Android and check out everything new in watchOS 4