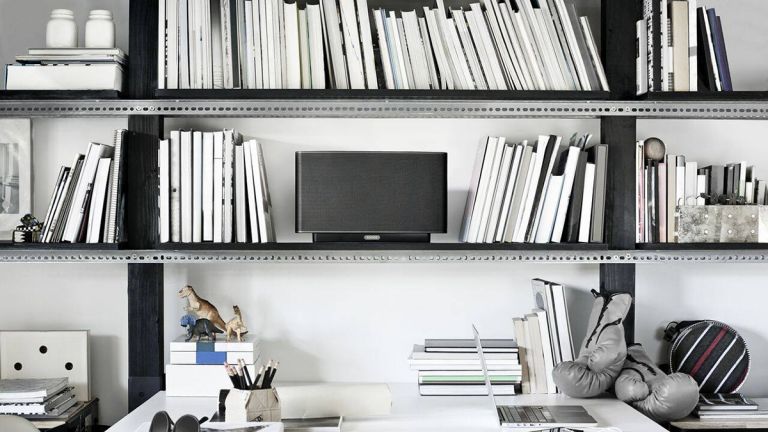 So, you want to pipe your much-loved tunes into every corner of the house? Get some smooth classical sounds in the kitchen or turn the study into a makeshift disco (or both)? There are a growing number of gadgets and gizmos to lend a hand, and here we'll share some of the choices you have no matter what kind of budget you're working with.

Of course there's nothing to stop you simply turning up your hi-fi or computer speakers up full blast, but in this collection of kit we'll focus on the hardware specifically designed to get your tunes wirelessly from one room to another.

Probably the first name that comes to mind for wireless music streaming is Sonos: the manufacturer offers three main speaker types (going up in size and price) as well as a subwoofer if you need to add some bass. There's also a Playbar you can use if you want something that works with your television set.

Older Sonos speakers used a bridge to connect to your router but now everything's built in - you tell the kit what you want to hear and the devices grab it, whether from the web or a local hard drive. Everything is controlled through apps on mobile and desktop, and you can combine all kinds of streaming services, including radio. The Sonos system also enables you to set different zones in your house for a different mix in each one. [Sonos, from £169]

Raumfeld is a relatively recent arrival to the music streaming scene but its systems certainly look the part. You certainly get a lot of choice in terms of speakers too, from compact devices that could easily sit on top of the kitchen cabinets to huge free-standing stereo speakers you can shove in the corner of the living room. You'll have to save up though, because the kit doesn't come cheap.

As with Sonos, everything is handled through a selection of apps, and you can plug in the likes of Spotify, Tidal and TuneIn as well as streaming songs you have saved on computers around the home too. CD and record players can be added to the mix as well if you buy enough connectors, though you will also need a separate bridge device to pull everything together. [Raumfeld, from £199.99]

Pure is best known for its high-quality, feature-packed series of DAB radios, but its line of wireless speakers offer wireless music streaming throughout the home too. As with its radio sets, the emphasis is on small and compact rather than producing sounds that will have you scraping your ears off the wall — they're the kind of speakers that suit bedrooms and kitchens rather than home cinemas.

The speaker groupings primarily work via Bluetooth, not via Wi-Fi, however: that means you can reliably stream anything from pretty much any modern-day smartphone, tablet or computer, as long as the devices are fairly close together, but they won't pull your tunes straight from the cloud like the Sonos ones unless you're using Pure's own Connect subscription service. [Pure, from £99.99]

Bose's SoundTouch system might be playing catch-up to Sonos in terms of feature set, but there are few bigger or more well-respected names in the audio industry, so you have to sit up and take note of what the company's doing here. There are a choice of speakers to pick from so you can select something that's right for your home, and everything is controlled through an app on your (iOS or Android) smartphone.

As you would expect from Bose, the build quality of the speakers is great and the audio is crystal clear, and services such as Deezer and Spotify connect with a tap (you can also tune into internet radio stations). You can use the included remote control or the buttons on the speakers themselves as alternatives to the app. [Bose, from £349.95]

Never one to get left out in any segment of the electronics industry, Samsung also has its own music streaming system as well. Big name services such as Spotify, Deezer, Napster and TuneIn are supported, and of course it works across a lot of Samsung's kit - televisions, stereos, soundbars and so on. If you're a Samsung fan then it's a good contender to put down on your shortlist.

Look for speakers starting with M or R at your local Samsung shop of choice - these are the ones primarily built to offer multi-room streaming audio. As you would expect, you can have different tunes playing in different rooms, and the finish of the products are up to Samsung's usual high standards. A few larger models and extra features wouldn't go amiss but Samsung has a genuine competitor to Sonos here. [Samsung, from £230]

Liked this? Check out What is Apple HomeKit?

Looking for a great read on the latest gadgets and tech? T3 magazine has it all - click here to subscribe now.