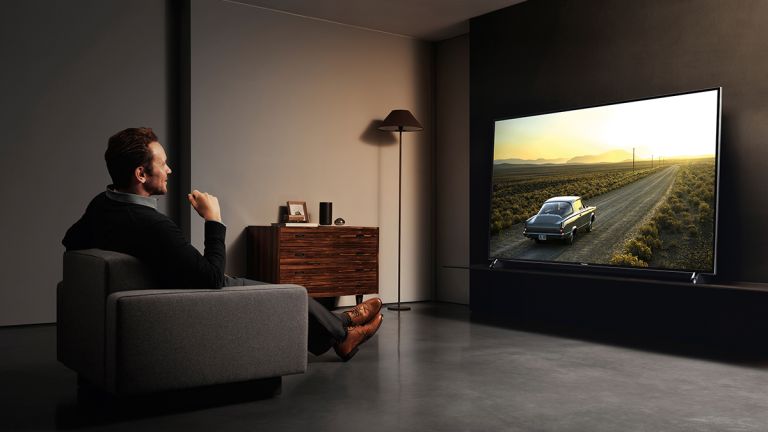 The good news for anyone shopping for a TV set is there's a whole host of choice out there – the bad news is you might be overwhelmed with all the options you've got to pick from. Here we're going to distil your decision down into six key factors you need to bear in mind.

Start with these questions and you'll be able to quickly narrow down a potential shortlist from the selection of TVs that are available, and save yourself some time trailing around the local TV store or clicking around online. Without any further ado, let's dive right in.

1. What size screen do you need?

Up to a certain point, more screen is better, but there comes a certain stage where you're not really going to see much of an advantage – especially if you're putting a huge TV in a small room. Consider whether you really need a vast number of inches on your set, using your current TV as a guide (or you could even knock up a basic wooden frame to test with).

Resolution is important too, though at this point pretty much everything you're going to come across is 4K (also known as Ultra HD). Full HD has been left behind by all but the cheapest models, and 8K is still some way off as far as the consumer market goes, so that's one less spec you need to check and double-check while you're doing your TV shopping.

2. What can you live without?

Modern-day TVs don't come with a huge number of extra features, but you might be able to save yourself some cash if you don't need the very latest standards in HDR and Dolby Vision. The smaller the set you're going for, the less important these extra picture enhancements are, though admittedly they can still make a different to image quality.

Most TVs have fairly feeble integrated speakers – that doesn't matter too much if you're going to buy a soundbar as well, but if not you need to make sure you're well covered. Just don't automatically assume you need to tick every box when it comes to bonus features such as integrated Freeview, because there's often savings to be had if you can do without.

3. What are you connecting up?

What are you hooking up to your new TV? Chromecasts? Games consoles? Apple TVs? Make sure you've got enough ports and sockets to cope with all the boxes sitting under your new TV, because you don't want to be crawling behind a huge screen every time you fancy playing on the Xbox rather than watching whatever's premiering on Sky Cinema that week.

If you're plugging something like an Apple TV or an Nvidia Shield underneath your television set then you don't need to concern yourself so much with the smart TV platform that comes on board – it's usually better to plug in an external device anyway. For what it's worth, Android TV is probably the best of the integrated smart systems at the moment.

4. What are other people saying?

Ah – TV reviews. Always something of a minefield, but if you can take the time to pick your way through them, you'll usually have a much better idea of the set you want to splash your money on. Specs and manufacturer blurbs can only tell you so much, and it's wise to augment that with some opinions from people who've actually used the TV in question.

That means both professional reviews and reviews left on retail sites by users who've already exchanged cold hard cash for a television. You should be able to get a good idea of the audio and picture quality, how easy the integrated software is to navigate, and if you're lucky, perhaps the differences between certain models that look very similar on paper.

As CES 2018 once again proved, new televisions are always coming down the line, so it pays to know about technology that's on the verge of breaking through, before you pay for a TV that'll soon become redundant. Fortunately, TV tech doesn't leap forward as fast as it does for some other gadgets, so whatever model you buy it'll last you for a long while yet.

As we've said, 8K resolutions are still a while away, so at the time of writing there isn't anything immediately on the horizon that you need to wait for: as a result it's a good time to buy a TV. Nevertheless, it's probably worth a quick browse through some of the recent TV tech news headlines just to see what's going to be coming in the next few years.

Last and definitely not least: what's your budget? You can really go to town in terms of price, especially if you opt for the more expensive OLED technology rather than LCD LED, but there are also some bargains to be had at the lower end of the market – as long as you get a 4K resolution on a set that's been broadly well reviewed, you can't really go wrong.

TVs that are a year or two old are decent options for saving yourself some cash, as long as you double-check that they've got everything you need – such as enough HDMI ports. One advantage of there being so many sets to choose from on the market is that even when you narrow down the selection by price, you've still got plenty of TVs to sift through.