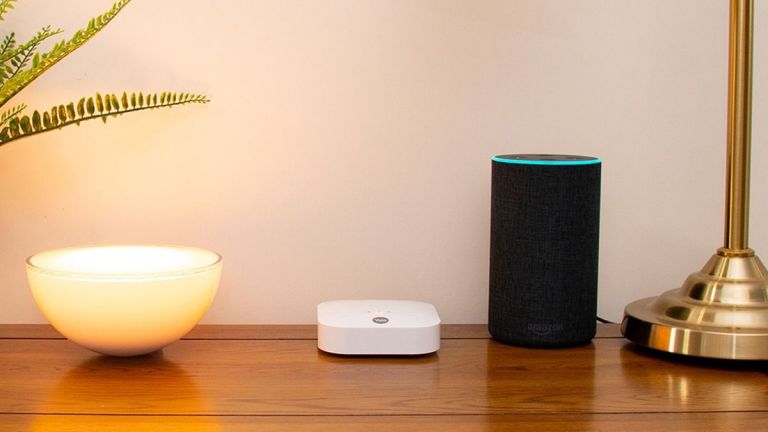 This is getting to be a rather crowded field, and while the Yale Sync Smart Home Alarm doesn't exactly stand out, it won't let you down either. If you want something that's reliable, easy to set up, and has no ongoing costs, it's worthy of your consideration.

Not so long ago, setting up a burglar alarm system at home meant getting the professionals in and spending a significant amount of cash. Now, you can buy everything you need in a box for just a couple of hundred pounds, and get set up in minutes.

We've seen these sorts of systems from the likes of SimpliSafe, Ring and others. As you would expect, security experts Yale have pushed out an offering too: the Sync Smart Home Alarm comes in a variety of configurations, and here we're looking at the Family Kit.

The Family Kit includes a smart hub for connecting to your main router, a keypad for arming and disarming the system, a siren, one door/window sensor, and two motion sensors. It's enough to comprehensively cover at least one floor of your home.

You can add extra sensors as needed, of course, but the Family Kit is a good place to get started. Check the widgets on this page for the latest prices, but you can expect to pay around £250 for the Family Kit, which is about on a par with other similar systems.

The Yale Sync Smart Home Alarm Family Kit is mostly bits of white plastic, but they're not unattractive – these devices are bland enough to fit in to your home's overall aesthetic, and have a solid, well-built feel to them. The keypad, for example, has buttons with a satisfying level of push to them. The hub is nice and small, so it can perch on top of your router if needed.

If you don't want to use the keypad, you can arm and disarm the system using the app on your phone, which guides you through setting up the system (a key fob is available too, though not in this pack). It's all very straightforward, starting with the hub, and it shouldn't take you longer than half an hour or so – setting up home alarm systems is certainly much easier than it used to be.

The system does work with Yale smart locks and cameras, up to a point, though they need to be managed in other Yale apps separate the one that controls the alarm system (which seems something of an oversight). You can control the system through Alexa and Google Assistant devices too, and sync it up with Philips Hue lights, to warn would-be thieves away.

The external siren that goes on an outer wall is the hardest bit to install, and this is where you might want to get some help. It's not too difficult though, because everything works without wires over Wi-Fi, and the alarm is powered with batteries. If you're reasonably confident with DIY, you'll probably have no problem with this.

The Yale Sync Smart Home Alarm focuses on one job and does it well: alerting you if movement is detected at home, via a pop-up on your phone. When the system is fully armed, the siren rings too, so your neighbours and any alert passers-by get a warning as well. We only had a few days to test the system, but it picked up movement every time, and you can disable certain sensors as and when needed (if you're leaving your pets at home, for example).

Unlike some alternative packages, there's no ongoing subscription to pay with the Yale Sync Smart Home Alarm – what you pay up front is all you need to pay. There's also no help from third-party security companies, which you get on pricier systems, so you'll have to call the police yourself.

Yale claims a wireless range of 200 metres (656 feet) for your sensors, and while we weren't able to get near this, we never noticed the remote devices lose contact with the main hub, despite windows and doors being in the way. The app actually does a good job of letting you test signal strength and making sure all the various devices can talk to each other.

The mobile app that comes with the Yale Sync Smart Home Alarm isn't the most intuitive and polished we've ever used, but it's not the worst either. One handy feature that the app and the system as a whole offers is arming reminders, so the system will prompt you to activate it once your phone (and the phones of all your family members) are out of range.

For a reasonable price, the Yale Sync Smart Home Alarm offers straightforward and reliable security protection for your living spaces – the kit is simple to set up, and reliable in use, and operated through a mobile app that is basic but functional. Neat extras like Philips Hue and Amazon Alexa integration add to the appeal.

Yale is certainly a brand name you can trust, at least in terms of home security – it's still finding its way in terms of gadgets, though the devices that make up the Family Kit are certainly nicely designed, well built, and easy to operate. We had no complaints during our time with the system.

Better integration with other devices and platforms – maybe HomeKit, third-party security cameras, and so on – is something that Yale could work on for future iterations of the product. We were also less than pleased at having to plug yet another hub into our router, but then that's par for the course for this sort of system.

If you're looking for an all-in-one, smart alarm system like this, we can recommend Yale's offering, and you can expand it as needed. We've also tested plenty of other very good products in this space recently though, from companies like Ring and SimpliSafe, and it's possible that they might be a better fit for your home.