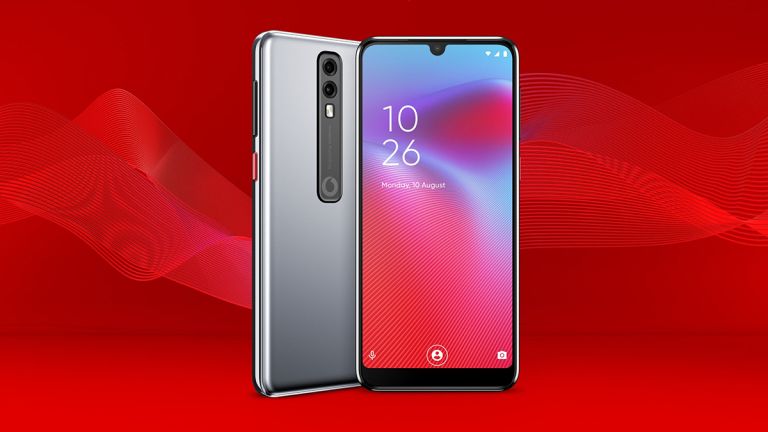 Shopping down in the bargain basement doesn't mean you can't grab a phone that impresses. The Vodafone Smart V10 is available at a rock bottom price, and while certain aspects of the phone do reflect that price, it offers plenty of value for money as well.

There's no shortage of cheap and affordable phones out there, but is it possible to go ultra-budget without making too many compromises in terms of what you need from a phone? At £100 or so, that's the question that the Vodafone Smart V10 tries to answer.

Yes, it's an own-brand model from Vodafone and just about the cheapest you're going to be able to pay and still get a phone that can run the usual apps. We've been testing out the Smart V10 to see if it's a viable proposition or whether it tries to cut too many corners.

With that low, low price in mind – check out the widgets on this page for the latest deals – you have to weigh everything else against it: the design and build, the quality of the screen, the battery and camera performance, the internal specs, and so on and so on.

Just about everything that the Vodafone Smart V10 phone offers can be described as "impressive, for the price" – but that doesn't necessarily mean that it's going to be the right budget phone for you. Read on to see how it scores in all the categories that matter.

This phone review is likely to get repetitive fast, because both the design of the phone and it's screen are pretty good, for the price. At 5.9 inches, the display is smaller than most on the market in 2019, and the 720 x 1560 pixel resolution is definitely sub-par. The chunky teardrop-style notch on the front looks at least a year out of date, and the handset feels plasticy and cheap to the touch – though it's pleasantly light as well.

All these shortcomings don't really matter too much, though: it's not as if you can't read emails or can't watch Netflix shows, the experience just isn't as premium as it might be on a phone costing up to 10 times more. In terms of colour, sharpness and resolution, the display isn't up to the standards of the £300-400 mid-rangers we've tested this year, but then you are paying a lot less.

At first glance you can't tell this a particularly cheap phone – the bezels aren't too thick, there's a rather appealing metal effect around the sides of the frame, and the back of the phone is well designed, with the dual-lens camera in the centre of the rear casing.

In a nod to the past and to the budget status of the Vodafone Smart V10, it comes with a microUSB charging and data port, so all of those USB-C adapters and plugs you might have upgraded to aren't going to work with this. In a retro move we're a little happier about, the 3.5mm headphone jack has been retained, up at the top of the phone, so you can carry on using your existing wired headphones.

The dual-lens 13MP+5MP rear camera is perhaps the weakest part of the Vodafone Smart V10 overall, and you're going to need some good light and a steady hand if you're going to get decent shots from this. Pictures often come across as muted and a little grainy – but then again, to keep repeating ourselves, you need to bear in mind that this is a £100 smartphone.

For social media posts and the like, the Smart V10 will do just fine, most of the time – but this phone is a long way behind the handsets at the very top of the camera ladder, and low light shots are particularly noisy and dim. Shutter speed and focus are a little slow too, and in a lot of ways it's just like using the rather hit-and-miss phone cameras we all put up with four or five years ago.

Of course, low resolution screens and less powerful components can do wonders for battery life, and the Vodafone Smart V10 is packing a decent 3,400mAh battery under the hood. We found we usually had plenty of battery left at the end of an average day – sometimes as much as 50 percent. This might even stretch to two days at a push.

In our usual battery test – an hour of Netflix at top brightness and medium volume – the battery level dropped from 100 percent to just 91 percent, which is one of the best results we've seen. You're going to have to try very hard to run the battery down on this phone in the space of just a day.

Packed inside the Vodafone Smart V10 is a very mid-range Snapdragon 429 processor, a just about satisfactory 3GB of RAM, and a barely passable 32GB of internal storage – you can at least expand that by up to 256GB more with a microSD card. In terms of responsiveness and lag, it's by no means an unusable phone, but you will notice the occasional pause or extra few milliseconds while the phone catches up.

With those sort of specs this is a phone well suited for older parents or younger kids – anyone who isn't a power user and who isn't going to be jumping from Spotify to Netflix to Twitter to Google Maps all day every day. We're not sure the Vodafone Smart V10 could keep up with those sorts of demands, or any serious mobile gaming.

As you would expect at this price, you don't get any fast charging, or wireless charging, or waterproofing, or NFC for mobile payments – there's a paucity of extra features here that might tempt you into a purchase, just a rock-bottom price that means you won't have to part with a substantial portion of your savings to own it.

One definite plus point is the clean, bloat-free version of Android 9 that's installed on the Smart V10. Okay, it's not the most recent version of Android, but it's close enough, and the phone isn't dragged down by unnecessary apps or visual flourishes that don't make that much of a difference anyway. It covers the basics and covers them well.

The Vodafone Smart V10 has its disappointments, but it's also fair to say that you're not going to do better at this price – so if you only have a fixed amount of money to spend, and you can't go any higher, then this could well be the phone for you. It makes a very good kids' phone too, if you're looking for something to give the children.

It's really decent in terms of its battery life, and the streamlined, bloat-free Android software, and the design and screen are respectable enough as well. The camera and overall performance of the phone might get a bit frustrating after a while, but – and stop us if you've heard this one before – it's a very inexpensive handset, after all.

Personally we'd be tempted to try and make the jump to the £300-400 range, at which point you're going to get a better camera and much smoother performance, but not everyone has that luxury or wants to spend that much money on a smartphone. And as we've said, it really appeals as a phone for the kids or older, less demanding users.

If you're going to compare phones only against other handsets in the same price bracket, then the Vodafone Smart V10 is definitely at the front of a fairly small field. If you want to pay as little as possible on a phone running Android in its full form, and with all the trappings of a modern smartphone, it's very difficult to do better than this.