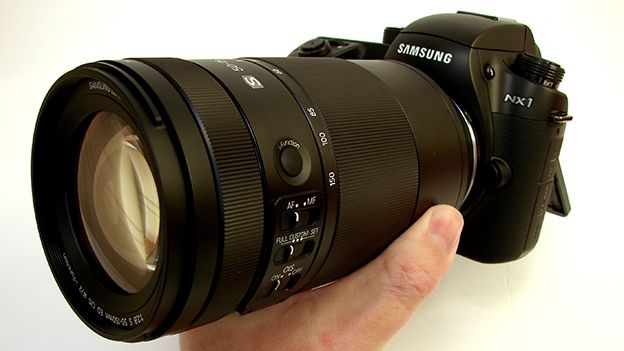 Samsung's range-topping system camera seeks to shake off Canon and Nikon's DSLR stranglehold, via whopping 28MP APS-C sensor and 4k video capture. But at a cost of £1,000+ for the body, can it compete?

Samsung's flagship compact system camera (CSC) was first announced at Photokina back in September. Now we have an NX1 in our hands, accompanied by a sizeable professional-feel 50-150mm image stabilised zoom to show Samsung means business in pitching the dust and weather resistant camera as a 4K video shooting semi pro proposition. It feels like, well, a bit of a beast. The whole CSC pitch was built on smaller bodies but near DSLR image quality. Here, however, with a larger type of telephoto lens attached, the whopping 28 megapixel back-lit APS-C sensor system camera is surely encroaching on DSLR territory for heft. And, since Samsung doesn't actually produce DSLRs, this is the closest thing it has to taking on the 'big two' in Canon and Nikon. In truth, though, the closer competition is the Panasonic GH4, which was the first CSC to market capable of 4K capture. The other possible contenders in both rivals' price bracket are the Sony A7 series, Olympus OM-D E-M1 and Fuji X-T1.

If you are a pro or high-end enthusiast actively considering this model, however, then it will quickly become apparent that Samsung can't yet compete with Canon or Nikon for firepower when it comes to sheer quantity of compatible lenses. While there are currently 16 compatible NX lenses in the Samsung range, which is more than enough for most amateurs, Canon and Nikon offer around 70 own brand optics each at last count.

That said, and on a more positive note, as a means of getting things up and running, the supplied 50-150mm is the very definition of jack-of-all-trades, particularly if candid portraiture in natural light coupled with an attractively defocused background that directs your viewer's attention straight to the subject is your thing. The latter effect is partly down to the fact that it comes with a constant bright/fast f/2.8 aperture throughout the focal range, which additionally aids performance in low light or at the telephoto end of the lens (maximum zoom).

A more regular kit option bundles the camera body with a 16-50mm lens for a suggested £1,299 at the time of writing, though be aware that this was a pre-order deal, with the added option to add a vertical battery grip to bulk the camera out further and make for more comfortable shooting in portrait fashion if so desired. It's clear from such accessories that the NX1 is no mere testing of the water in terms of how it might attract higher end users to the brand. Samsung is clearly serious about this proposition.

Taken as a package, camera specification naturally impresses too. Not only do we get that very high resolution from an APS-C chip of the same size as those found in consumer DSLRs, we also get a tilting AMOLED display – as opposed to the more common LCD – and eye-level electronic viewfinder for those who prefer shooting with the camera raised to their face. Both of these framing options provide class-leading high resolutions for their class. In terms of overall performance and speed-of-capture the NX1 far exceeds being merely up to scratch too, offering up to 15 frames per second continuous capture up to 70 frames plus a auto focus hybrid system that twins a massive 205 phase detection AF points with 209 contrast AF points to ensure both swiftness and spot-on accuracy.

Sitting comfortably in the palm, the NX1 very much resembles a DSLR, not just in design but also in the layout of buttons and controls, complete with chunky shooting mode wheel and a second marginally smaller dial offering access to drive modes. The only thing we missed was that there wasn't a DSLR-like control wheel placed just forward of the shutter release button, so that it might automatically fall under the forefinger when gripped. Instead we get said control located just behind the shutter release, which for us made it slightly less convenient to operate, but in fairness what makes for the best fit overall depends on the size of your own hands.

Even with relatively large lens attached, the equally chunky standard grip on the NX1 stops things from feeling too front heavy, handling wise, though two handed support is very much needed when you bring the camera up to eye or chest level to shoot. Detached from its lens, the body feels relatively lightweight given the heavyweight specification offer, with official figures suggesting a body-only 550g, making it lighter than the average DSLR.

At the back of the camera we also get buttons ranged to the right and above the articulating screen, as well as a useful status display window atop the camera for keeping track of basic functions – a feature normally only found the on semi pro DSLRs this CSC is aspiring to replace.

In addition to the eye level viewfinder on the NX1, we also get the handy provision of that tilting (90° upwards, 45° downwards) 3-inch rear AMOLED screen that, like all Samsung screens, makes colours really 'zing' and convinces you that what you're shooting is great, while you're out shooting it. This immediately brings a smile to the face. The larger display further offers a class leading resolution of over a million dots, lending images a life-like appearance, while the smaller eye-level viewfinder, complete with integral eye sensor that automatically switches it on, offers a massive two million plus dots of resolution to keep the view razor sharp. Samsung clearly knows its screen technology.

The lithium ion cell that slots into the base of the NX1's handgrip is good for around 500 shots on a full charge, which is on a par with a consumer level DSLR costing £500, while being rather better than your typical compact system camera, which manages circa 300 pictures on average. In this respect the NX1 very much occupies the middle ground between a CSC and a semi pro DSLR, the latter being capable of between 700-to-900 shots on average from a physically larger cell.

A 28-megapixel effective resolution from a 30 megapixel APS-C sensor is approaching professional levels of resolution – albeit providing a pixel count that we would normally find married to an even more physically larger full frame 35mm sensor. This boasts the question as to how all those pixels crammed onto a space that, on competitors' models, is normally reserved for 18 or 20 megapixels, is going to affect low light shots; will more pixels simply result in more visible grain/image noise in shadow areas?

We took some hand held shots with the Samsung NX1 and 50-150mm lens in a shadowy, tungsten-lit hotel corridor and, though we couldn't avoid some dark shadows despite the camera having chosen a high ISO1600 sensitivity setting, we were able to pull a shedload of detail back from the grain-free dim with some subtle post processing undertaken. The results were on a par with any 'professional' camera for us. Plus, as a bonus, if it's well saturated colours you're after, then as a default the Samsung really delivers on this count too, giving skin a healthy glow and causing red, blues and greens to really 'pop' for both video and stills. The built-in optical image stabiliser also avoided any nasty instances of blur resulting from camera shake due to slower shutter speeds.

Pitched at photography experts, enthusiasts and semi professionals, the 28 effective megapixel Samsung NX1 truly feels like the camera that all previous NX products were building towards, maintaining the large-ish APS-C format sensor that has been the making of the range and delivering, for us, pro-grade imagery. Whether there is a market for a camera with Samsung's name on it costing over £1,000 for the body only remains to be seen however, while time will tell whether the audience it finds is more videographer or stills shooter.