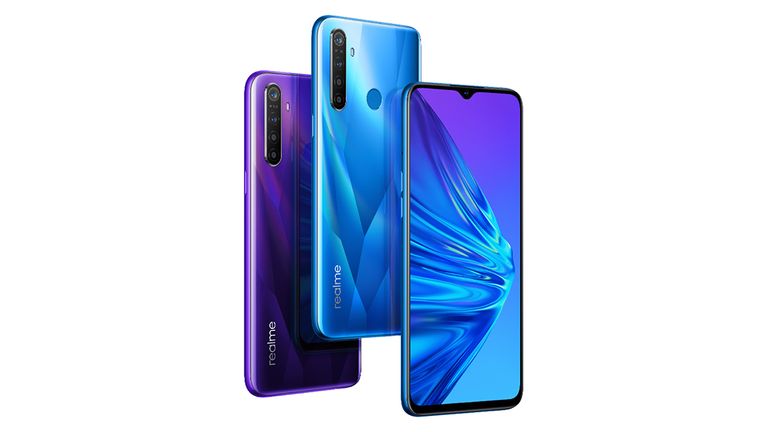 The Realme 5 looks good and performs well, for a budget phone – considering how little you're going to have to pay for it, it ends up giving you enough bang for your buck.

The Realme 5 continues the Chinese invasion, with Oppo spin-off Realme now joining the likes of Oppo, Honor, Huawei, Xiaomi and others in selling very affordable handsets in Europe and the US. The Realme 5 is one of its latest budget offerings, a follow-up of sorts to the Realme 3.

You're definitely not getting the latest and greatest smartphone specs here, but then you're not paying anywhere near flagship prices, so you might consider that a good trade-off. Here we'll be putting the Realme 5 to the test in all the categories that matter.

The design and build quality is certainly respectable for a phone at this price point, and you get a 6.5-inch screen and a quad-lens rear camera into the bargain (though one of those lenses is a depth sensor). A battery capacity of 5,000mAh is very generous too.

There are compromises though, as there have to be to get a phone on sale for this price – the screen resolution is a little on the low side, the internal components aren't the best on the market, and you don't get any cool extras like waterproofing or wireless charging.

With that 6.5-inch screen that we've already mentioned, a small teardrop notch, some reasonably thin bezels and a few well-placed curves, the Realme 5 can certainly hold its own in the looks department. The design is maybe a little bit uninspired, and the 1,600 x 720 pixel screen isn't the sharpest, but we don't think you're going to be embarrassed to pull the Realme 5 out of your pocket.

The fingerprint sensor is around the back of the phone, together with that quad-lens camera, which is neatly arranged in the corner (there is quite a chunky camera bump though). At the bottom you've got a headphone jack and a speaker, while the Realme 5 goes old-school with a microUSB port – don't worry if you've thrown all your microUSB cables away, because you get one in the box with the Realme handset.

Blue or purple are your colour choices when it comes to the Realme 5, and in both cases there's a sort of textured diamond effect, which adds a bit of aesthetic sparkle when it catches the light. Depending on your perspective, you might see it as a little gaudy or a much-needed variation on the plain phones that dominate the market at the moment.

Get the Realme 5 in your hand and it does have a somewhat light and cheap feel to it – there's a lot of plastic in use here – but overall we'd say that it's a well made and well designed bit of hardware. It's rated as "splash resistant" but not waterproof, and you don't get wireless charging either, so you'll have to be satisfied with plugging your phone in every time you want to give the battery a boost.

The Realme 5 gives you the mid-range Snapdragon 665 and either 3GB or 4GB of RAM, depending on the configuration you pick up (definitely go for 4GB, if you get the chance). That's good enough to do everything you'll want to do, just be prepared for the occasional extra few milliseconds of wait time as you switch between apps or load up games. This is one of the areas where Realme is saving some money.

As for that 12MP+8MP+2MP+2MP camera, don't expect too much: the Realme 5 might be stuffed with lenses, but there's no telephoto zoom here, and the photos you're going to get will only be good rather than very good. Of course even the worst camera phones are fine, nowadays, but you're not going to get great detail if you zoom into these images, and low-light shots are a little hit and miss (though still okay, for most of the time).

Every smartphone is a compromise between specs and price, and if you want sensational-looking pictures or performance, look elsewhere. If you want to spend as little as possible, then the Realme 5 might be for you. You get 32GB, 64GB or 128GB of internal storage by the way, which you can expand via a memory card.

The only real annoyance we came across during our time with the Realme 5 was the Color OS version of Android that's stuck on here – like a lot of Chinese variants, it's on the gaudy and bloated side. Battery life was more promising, with the phone dropping from 100 percent to 92 percent after an hour's video streaming – a very good result – and usually reaching the end of the day with plenty of juice left in the tank.

Considering you can get the Realme 5 for less than £200 if you shop around online, it's hard to quibble too much with the shortcomings of the phone – you can of course spend five times that amount on a flagship handset these days, so you pay your money and adjust your expectations accordingly.

The software on the Realme 5 is a little disappointing, and the 10W microUSB charging is slow by today's standards, and performance isn't anything to write home about. At least Realme has avoided the troubles that Huawei has in doing deals with US companies, so all the Google apps and services are present and correct.

What you get with the Realme 5 is a phone that looks fine, works well, and can take decent pictures most of the time as well. Bear in mind you won't have to pay all that much for it, and that seems like quite a fair bargain to us. When it comes to super-budget phones, this is one of the best deals around at the moment.

Just make sure you compare it against all the other cheap phones and Android phones available right now, because you might find it worth your while to spend a little bit more for an upgraded phone – nearly new flagship phones and mid-range handsets can often be grabbed at attractive price points too, especially if they're about to be replaced.