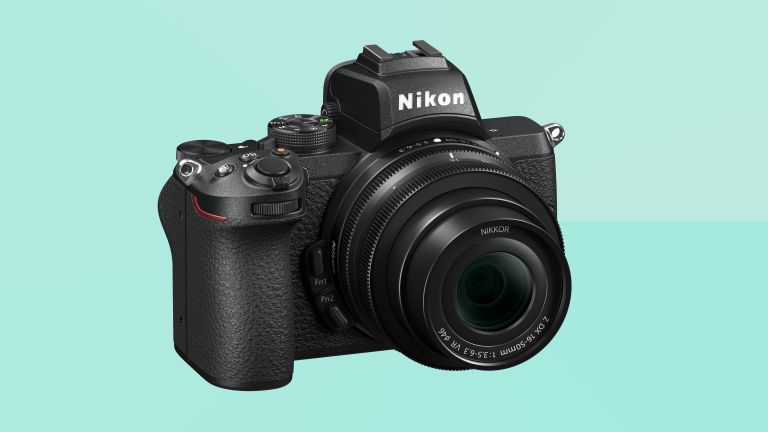 Available at a great price and with lots to like - including build quality, handling, a very usable screen and viewfinder - the Z50 might be the new kid on the APS-C mirrorless block, but it’s easily one of the best out there.

Nikon has already proved its worth in the mirrorless market, when it introduced the fantastic Z6 and Z7 cameras in 2018. The natural next step was to bring out a more consumer-friendly mass market option, which appears in the form of the APS-C (smaller sensor) Z50.

Using a 20.9 megapixel sensor, we’re told it’s not the same as the one found in the D500 DSLR, despite having the same pixel count.

The fact that it has a smaller sensor means that Nikon can shrink down the entire body, making it much more travel friendly, as well as bringing the price down to a much more affordable level. It also uses the same Z mount as found on its full-frame brethren (Z6 & Z7), giving you the flexibility to use the same lenses across both systems - as well as any F mount lenses you might have via an optional adapter.

That said, two lenses have been launched specifically for the APS-C (or DX format, as Nikon calls it) sensor which can be bought as part of an attractively priced kit package - a 16-50mm f/3.5-5.6 “pancake” lens, which collapses down for ultimate portability and a 50-250mm f/4.5-6.3 lens for grabbing those long distance shots. Plenty more lenses across the Z line up are planned for the next two years, too.

Nikon faces quite a challenge on its hands with this model. The mid-range APS-C market is a very crowded one, with popular models already available from Fujfiilm, Sony and its arch-nemesis, Canon. With a slew of features designed to appeal to a broad audience, Nikon really is bringing its A game to the fight, but whether it’s enough remains to be seen.

Using the Z50 is essentially like using a miniaturised Z7/Z6. Nikon has done a good job of shrinking down what was already a nicely small body to make it even more travel friendly.

Naturally, there are some sacrifices to be made for the size reduction - gone is the top plate LCD which displays key settings, while the lack of a joystick to set the AF point when using the viewfinder is also missing. Instead, you can use the directional keys to choose a selection point, which seems to take a long while. I’d welcome the option to carry on using the screen while shooting through the viewfinder to set the AF point, something we’ve seen from other models on the market.

If you use the Z50 with the 16-50mm f/3.5-5.6 pancake lens, you’ve got a very versatile and travel-friendly package. It’s not going to squeeze into your pocket (unless perhaps you wear clown trousers), but it’ll slip neatly into a small bag. You’ll probably even find that you have plenty of room for the second lens if you opt for the twin lens kit - or one of the other existing Z lenses.

The buttons that do still remain on the camera are nicely placed in the space available, with a result that it doesn’t feel too cramped. A small section of the screen is blocked off for virtual touchscreen options, so that helps with that.

Moving to the top of the camera, there’s a mode dial for selecting various shooting options, while there’s also a handy switch for quickly flipping between video and stills shooting. You’ll also find dedicated buttons for exposure compensation, ISO and video recording, too.

Along with the 20.9MP DX format sensor, you’ve also got the same Expeed 6 imaging processor as found in the Z6/Z7. This facilitates some of the Z50’s features, including 4K video recording up to 30fps, as well as a native ISO range between ISO 50 and ISO 25600.

Some other features have also been brought over from the Z6, including the same hybrid autofocusing system, giving you 209 on-sensor AF points that cover around 90% of the frame for edge-to-edge sharpness. For low light shooting, you’ve got sensitivity down to -4EV, while Eye-Detection AF is on-board for capturing pin-sharp portraits.

There’s a 0.39-inch, 2360k-dot electronic viewfinder - which is smaller and lower resolution than the one found on the Z6/Z7, but still extremely usable. A 3.2-inch tilting LCD is slightly different in operation from that found on the Z6/Z7, as it tilts all the way forward, from the bottom of the camera. This makes it ideal for selfies, but less so for mounting the camera on a tripod for vlogging.

Other useful features include inbuilt Wi-Fi and Bluetooth, which can be used with Nikon’s Snapbridge app (free for Android and iOS), a micro USB port for charging the camera on the go (a shame not to see USB-C), and a microphone socket.

In terms of memory cards - we don’t have the controversial XQD cards as found in the Z6/Z7. Great news for enthusiasts - the Z50 accepts SD cards (just a single slot). These are much cheaper to buy, and you may indeed already have a pile of them of them ready to go.

As the Z50 uses the same autofocusing system as the Z6, we already had an idea that it would be a solid performer. With 90% coverage across the frame you can place your subject almost wherever you like and be assured of sharp focus.

Most of the time, the camera is capable of locking onto the subject quickly and with ease, with very little in the way of hunting. On occasion, the wrong subject might be selected when working with Auto-area AF, but switching to single-point AF allows you take back control. In very low light conditions, you might find there’s a little back and forth, but happily it’s rare for the camera to display a false confirmation of focus.

When it comes to moving subjects, the Z50 isn’t the world’s best performer by any means, but it should be more than enough for capturing family, pets and other fairly gentle action. It’s a little disappointing that the Z50 is only equipped with a slower UHS-I card slot, but unless you’re trying to keep up with high intensity sports, you probably won’t be too bothered.

What is a more impressive performer is Eye AF, which snaps onto the eye of a person and follows it around with ease. This is not a camera which is aimed at portrait pros, but for those aiming to capture high-quality family snaps, it’s a great function.

Battery life is relatively staid, with an official rating of 300 shots. In reality, you’ll almost definitely get more than that from it - especially if you are quite disciplined with turning the camera off between shooting sessions. It’s worth toting a portable battery charger, or even a second battery, if you’re somebody who wants to shoot a lot of 4K in any given time frame though.

When it comes to image quality, the results from the DX format lenses aren’t quite so sharp as the full-frame options, but that’s only likely to be an issue if you’re making bus-sized prints.

Otherwise, the Z50 puts in an impressive performance. Despite the reduction in sensor size, detail is still very well rendered, while the all-purpose metering system gets it right most of the time, exposure-wise. Automatic white balance errs ever so slightly towards warm tones when faced with artificial lighting, but otherwise it’s pretty accurate. Overall, colours are nicely saturated, giving across a good feeling of warmth without going overboard and being too dazzling.

For low light shooting, it’s best if you can try and keep the ISO setting to ISO 6400 or below. Above this, some noticeable noise creeps in which you’re likely to spot in prints of A4 or larger. For web sharing and small prints, it’s less of an issue.

There’s really not too much to dislike about Nikon’s newest entry into the mirrorless market. It delivers many of the excellent features of its already well-proven Z6 and Z7 models, shrinking it down into a more affordable and even more travel-friendly body.

It really was the next logical step for Nikon to bring out a model like this, and it shows that the company is very much headed in the direction of full-on mirrorless support. It could even possibly signal the further dwindling of the DSLR line-up, certainly in the mid-range or mass-market line-up anyway. It’ll be interesting to see if any new APS-C DSLRs emerge from Nikon in the next year or so.

That said, the APS-C mirrorless market is very crowded and Nikon has a lot of competition to fight against. The obvious main contender for your affections is the Fujifilm X-T30, which offers beautiful looks and a much more diverse set of existing lenses to choose from. There’s also decent offerings from Sony and Canon, too.

Still, if you’re an existing Nikon user, looking for your first mirrorless to switch to - or indeed you’re just somebody looking for their first camera after mainly shooting with a phone - this is a fantastic option which is very worthy of your consideration, especially at the excellent price point.