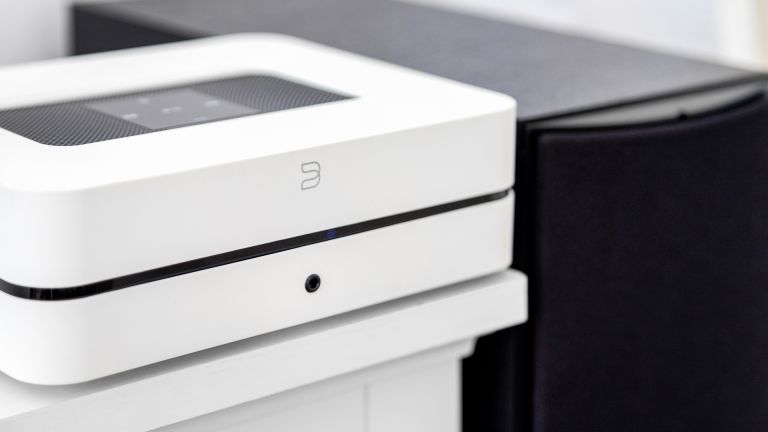 People’s love of music hasn’t changed in hundreds of years – we’re always looking for new ways to make it more convenient to listen to. Portable radios, Walkman, iPod… having the songs you love with you at all times is maybe one of the most important technological feats we’ve ever managed.

But when we made how we listen to music smaller, we made it sound smaller too. We gave up some of the detail and quality that we had from big hi-fi setups in exchange for simplicity. But this is 2019, and we don’t have to compromise any more: you can have the power and unmatched sound of a big, complex system, but from a single smart box that makes it simple to play music from dozens of sources with just a tap on your phone.

The Bluesound Powernode 2i is an amp and a streamer bundled together, so it can pull music from anywhere – everything from Spotify to Apple AirPlay to Bluetooth to a wired turntable – then blast it out to whatever speakers you like. It makes things so easy.

You can stream through it from nearly 20 different online sources, such as Spotify and Deezer, but also including the lossless services that stream music in studio-level quality, such as Tidal and Amazon Music HD.

When you give these streams to a system that can actually pull out all the detail in them, you’ll hear music like it’s new again. There’s so much work that musicians, producers and singers put in that gets lost in compression – of low-quality files, of phone processors, of crappy headphones – and the Powernode 2i brings it all back out. You can hear the music the way the artists heard it when recording.

On top of being able to stream from online, there’s also Apple AirPlay 2 for beaming music directly from your iPhone to the Powernode 2i, plus aptX HD Bluetooth streaming, which lets you play lossless files to it from anything that supports this tech, including some of the new wave of Bluetooth-enabled turntables, so you can get into vinyl with zero new cables or connection hassle.

That said, if you want to connect any extra players the old-fashioned way, the Powernode 2i has plenty of cable inputs, so your CD player or turntable is easy to hook up.

You can also play any music files you have on an external drive too, and they’ll again be given the full sprucing up treatment that Powernode 2i gives all digital music – you just connect over USB, and you can find and play the files through the bluOS app on your phone.

There’s one more touch that helps make this your ultimate all-in-one sound system – it also connects over HDMI ARC. Plug your TV into this over its ARC-ready port and you can play your movies and TV sound through the Powernode 2i’s amplification, and out to whatever great speakers you have attached to it – much better than the tiny speakers built into your TV.

Everything you do with the Powernode 2i can be controlled through the bluOS app on iPhone and Android, but even easier is that it’s all geared up with smart assistant support, including Alexa, Google Assistant and Siri. You can tell these assistants to play music from the streaming services you’ve enabled on it, and can even take advantage of smart home automation, triggering your speakers to play automatically. (For the really serious about home automation, it works with Creston and Lutron systems too – proper high-end stuff.)

All you need to do to get the ultimate hi-fi setup from this one box is to add speakers – of whatever size or power suits your room. The Powernode 2i can scale with however big you want to go, whether it’s a pair of bookshelf-sized speakers such as the PSB Imagine XB, which will give you great stereo sound in a small or medium room; or something like the huge and meaty DALI Oberon 7, which blow minds with their twin woofers and oversized high-end tweeter.

And if you want to connect a sub, for even bigger low-end thrills, it’s no problem – the connector is built in and ready to go.

But maybe you don’t want any wires at all in your new streaming future. This box still has you covered – the aptx HD lossless Bluetooth streaming can be used to connect it to wireless speakers too, so you could set the whole thing up with no cables at all, but no loss of sound quality from what you play through it, with the right speakers. This thing seriously does it all.

And for times when you can’t blow the doors off with your big juicy speakers, there’s a headphone connector as well, and the Powernode 2i is just as good at getting every drop of great audio from your headphones as it is your speakers. Invest in some worthy cans and the Powernode 2i will reward you.

Basically, the Powernode 2i is the centre of your music world, whether you want to wire in some players or just take everything totally wireless – and it makes everything it touches sound better. Want to hear the best-sounding music of your life? Grab this, and just add speakers.