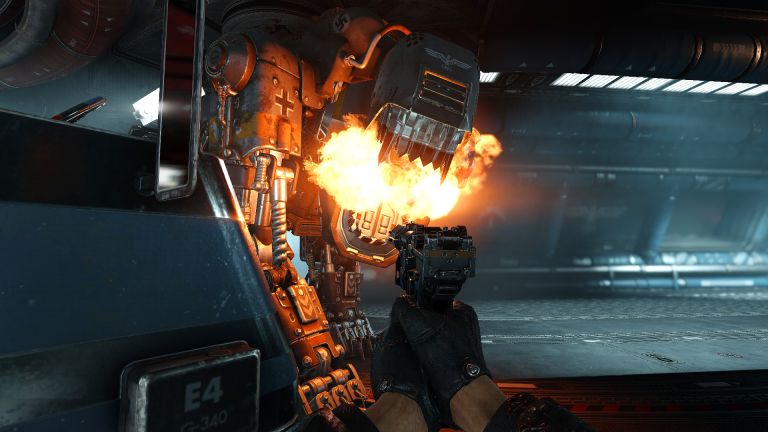 While it does make some graphical trade-offs to fit within the constraints of Switch’s hardware, it's a modern day miracle that Wolfenstein II: The New Colossus looks as good and plays as good as it does on a console with full handheld support. As one of the most memorable and rewarding shooters of this generation, its imperfections aren’t enough to tarnish its place as one of Switch’s must-have games.

Of all the third-party publishers in the world of video games, who would have guessed that Bethesda would be the one to show just what Nintendo Switch is capable of. From the full, axe-swinging majesty of The Elder Scrolls V: Skyrim to the almost poetic ultraviolence of DOOM, handheld gaming has never been so versatile.

However, it’s hard to forget Skyrim is a six-and-a-half-year-old game and it took an entire year for id Software’s franchise revival to make the jump to Switch.

Suddenly, reality sets in - can port maestro Panic Button work its inexplicable magic and bring Wolfenstein II: The New Colossus to Nintendo’s console less than eight months and do the version that arrived on PS4, Xbox One and PC justice?

Yes - and impressively so, too - but it’s taken a few blows on the visual side of things in order to get it to work.

There’s quite a lot of blurring in place in order to help free up processing power for its impressively large levels and on-screen gunfights - something that’ll stand out more if you inspect certain weapons up close or an NPC’s semi-featureless face.

The game’s draw distance also takes something of a hit, with a general muddiness making some of its darker missions - of which there are quite a few, this being a game set in a world where the Nazis won WW2 and left much of the western world in ruin - occasionally difficult to navigate. However, it’s nothing increasing the gamma settings in the menu can’t partially remedy.

Both volumetric and dynamic lighting have been removed, as have most of the major particle effects that helped sell The New Colossus as such a visual powerhouse when it arrived on other platforms last October.

It’s still a very pretty game - especially when you consider Switch is running on a souped-up Tegra X1 processor designed for smartphones - but it’s one that’s had its make-up smeared on more than one occasion.

The framerate is a lot more stable than with last year’s DOOM port, with an adaptive resolution feature that raises and drops the number of pixels on-screen depending on the amount of rendering taking place.

Considering none of the levels have been chopped up, or gated off with load-times, it’s a remarkable feat. Even load times between missions or player deaths are mercifully short.

The result is something best enjoyed in handheld mode. It’s still more than playable when docked and displayed on your TV, but that blurriness that Panic Button has had to employ in order to get a triple-A console/PC shooter running on significantly less powerful hardware becomes far more apparent.

If you’ve played The New Colossus already on other platforms, this Switch port might be a little too muddy for your eyes. But in handheld or tabletop mode, we found the visual downgrade much less of a distraction.

But here’s the thing. While its lost some of its visual sheen (and some of the gore from certain scenes, oddly enough) you soon realise this trade-off is entirely worth it. This is a proper first-person shooter, in its glorious entirety, on Nintendo Switch.

Featuring one of the most memorable and engaging single-player stories you can play this side of a BioShock. Panic Button has, once again, made the impossible possible and brought Wolfenstein II’s brutal alt-history world to life on a device you can take anywhere.

Picking up right where 2014’s Wolfenstein: The New Order leaves off, The New Colossus continues the story of grizzled and scarred war veteran ‘BJ’ Blazkovicz as he attempts to lead a small band of rebels against the Third Reich.

With the ’60s now in full swing, and with New York flattened by an atomic bomb, our Nazi-killing hero heads off to what’s left of the United States in a last-ditch attempt to stop the facist war machine for good.

Of course, it’s as daft as it sounds, with Nazis in giant mechs, KKK members leading ticker-tape parades through Roswell and plenty more B-movie-esque details, but it’s one that rarely leaves you bored or unengaged.

Its hefty and rewarding shooter template still serves as the bulk of the experience, with open-ended levels offering the choice of tactical stealth or all-out warfare as you fight through waves of enemies that work together to flush you out.

The arsenal of weapons at your disposal could have been a little more varied, but there’s a simple upgrade system in place that enables you to tailor each gun to support a certain playstyle.

Whether you’re a sneaky slayer looking for a quiet SMG or a blood-thirsty warmonger in desperate of an extra beefy assault rifle, there’s all the scope you need (if you’re willing to explore each levels in search of resources).

The New Colossus also utilises a passive perk system. So rather than wasting time with levelling up an XP bar or assigning points to an ever-branching skill tree, you have a set of in-game challenges tied to a particular playstyle.

So players who tend to play stealth and hack foes to death on the quiet, will enjoy buffs that support a less confrontational style of play. And vice versa if you like going in with dual assault rifles and running amok.

While there’s no multiplayer mode to sink your teeth into (something the other versions of the game also lacked), there’s still plenty of replay value to be found. For a start, the single-player campaign, much like The New Order, is refreshingly long and will take you a good 10-12 hours to finish.

Add in all manner of collectibles to pick up around its mostly open-plan levels and there’s more than enough to keep you playing. They’re mostly little things like concept art, but they’re a worthy treat nonetheless

Oh, and then there are the multiple difficulty settings that, if pushed to the very highest, border on the near impossible. While the campaign isn’t quite as brutal on the standard difficulty as The New Order, it turns into a deadly adventure on the top settings and punish even the slightest mistake with instant death. Thankfully you can still save manually, but health only regenerates so far...

Gyro aiming is also available from launch - something Panic Button took months to retroactively add to its DOOM port. Using motion controls might bring back awful memories of Wii-based shooters such as Call of Duty: Modern Warfare: Reflex Edition, but thanks to the excellent gyros in the Joy-Cons it works a real treat.

Whether you’re using the whole Switch in handheld mode or aiming just with the Joy-Cons in tabletop/docked mode, gunfights and navigation feel natural and rewarding.

While the downgrade in visual fidelity can be a little grating at times - especially if you've played this before on other platforms - it ultimately doesn't deter from the fact Panic Button has brought one of the best shooters of the past decade to Nintendo Switch with its addictive and visceral FPS gameplay intact.

From the B-movie nastiness of its story to the intense and dynamic nature of its gunfights, this is a summer blockbuster condensed by black magic onto a hybrid console that really shouldn't be powerful enough to run it.

If you ever needed a poster boy for Switch is capable of in the right development hands, Wolfenstein II: The New Colossus is it. Bravo, Panic Button.