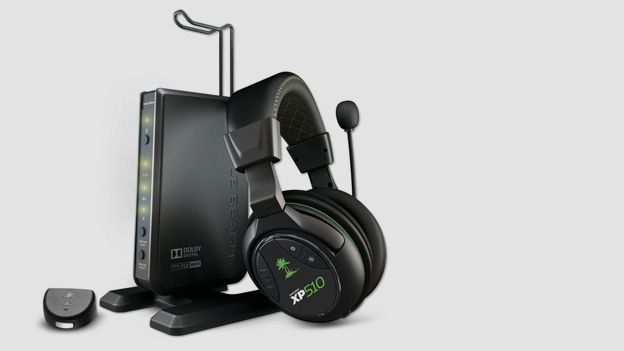 The Turtle Beach XP510 arrives boasting a whole load of new bells and whistles, but can it live up to that chunky price tag?

Update: The Turtle Beach XP510 and PX51 gaming headsets will be fully compatible with the PS4 at launch, says the maker. The new Call of Duty Ghosts Phantom headset, due in November, will also work with Sony's next-gen console.

Those consoles (and indeed, the consoles you can buy today) came with tiny, delicate plastic things that clamped over your head, giving you a rudimentary contact line with your friends and fellow players.

Compared to the XP510, these headsets are mere childsplay. Not only does Turtle Beach's new headset come with it's own dedicated base-station, it also promises true wireless communication for the first time ever, and it's rammed full of tech to enhance your gaming, movie and music enjoyment. Let's take a closer look.

The headset itself is fairly bulky, with two large earcups to surround the ears and provide surround sound to your lugholes. The headset is typically plasticky, which results in it feeling a little too lightweight and not as sturdy as it looks.

The clicky buttons are a similar story - perfectly reasonable but perhaps a little more plasticky and lightweight than we'd hope. On the outside of each earcup there are a variety of buttons and wheels for game volume, Bluetooth and mute, as well as buttons for adding voice masks, changing your sound and voice presets and lots of more technical stuff that we'll get into later.

All that being said, the mesh earcups and headband are cool, and soft. The headset is really comfortable, enough so for long gaming sessions.

In all, the XP510 isn't going to break on you - it's made to be impact and tension-resistant so it'll actually survive a fair bit of damage - but the build quality could be a little better for a product with such a premium price tag. The Astro A40's for example, despite being older, cheaper and not having nearly as many features, are a much nicer product to hold and to wear.

The sound quality of the XP510 is excellent, more than suitable for all but the most discerning audiophiles, and definitely good enough to use for movies and music. Turtle Beach designed this product to be a multimedia device, not just a gaming headset, and they've done a good job here.

Even more impressive is the extent to which you can customise your sound. Surround sound can be toggled on and off at the base-station, and then the angle of your sound can be customised from your headset.

So you can go from true equal surround whilst watching a movie to a setup that emphasises noise behind you if you want to jump into some Call of Duty: Black Ops 2. All very clever, and intuitive.

For those who aren't planning on so much fiddling, there are plenty of presets for gaming and movie watching, which can be cycled through using the buttons on the left earcup.

Aside from the multi-directional sound, the most exciting thing on offer here is the possibility of completely wireless chat. There are a few wireless headsets out there - the Astro A50 and Tritton Warhead, to name but two - that claim to be wireless on account of providing wireless sound. But if you wanted to use these headsets to chat to your friends, you'd still have to connect them to your controller.

The XP510 comes instead with a small RF transmitter that connects into your controller, and connects wirelessly to your headset - pair the two and your party chat will come through your headphones. Simple.

Although you'd never really be far from your controller, you can wander to the kitchen for a snack with your headset on and the sound will only start to get a bit choppy at about 5 metres distance.

The headset also supports multiple Bluetooth channels, so not only can you connect it to your base-station to stream your media, you can also connect it to your phone/tablet/laptop, and receive calls and listen to music or movies this way. It alll works pretty seamlessly - as Bluetooth goes - and it serves as proof of how hard Turtle Beach has worked to make this a truly multi-faceted device.

Of course, whether you use it for any of this is up to you, but the fact that you can is already helping to justify the price tag.

The Lithium Polymer battery gives a solid 10 hours of use, when all the Bluetooth options are turned on. If you used it sparingly, you could probably get more juice out of it.

It is slightly annoying that you can't charge the headset automatically when placing it on the stand - you'll still have to plug it into a microUSB to refuel it. It may be wishful thinking, but some sort of inductive charging solution would have been a huge win.

After testing the XP510, it's become clear that to call it a gaming headset is a gross underestimation of what this product is capable of. This is a fully fledged home entertainment headset, as proven by the excellent sound quality and huge variety of features it provides.

If we have one bugbear, it is that the build quality is still a little lacking. We wish that a headset made of plastic didn't feel quite so plasticky but perhaps that's asking a little too much.

Either way, if you're going to use the XP510 for calls, gaming, movies, music... it's definitely worth the price tag. There's nothing else that does everything the XP510 does, and if you're looking for something to satisfy your multi-faceted media needs, you won't find anything better.