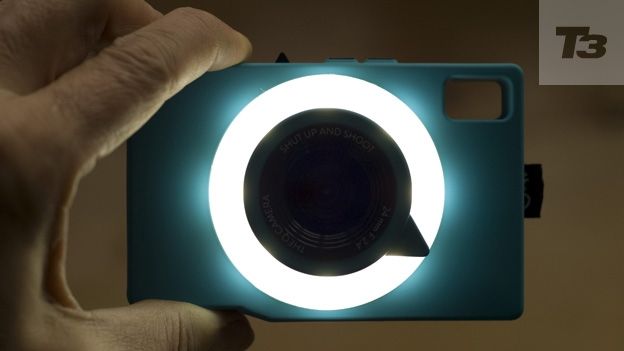 theQ Camera is the "world's first fashion-forward, social" digital camera, built to instantly share shots, with a ring-flash for selfies and built-in filters

The Q Camera (or theQ camera as the company annoyingly insists on writing it) is the "world's first fashion-forward social" camera. But can the super-simple, rugged and built-for-sharing digital camera carve out its own niche in a super-competitive market?

On one hand, it's up against the Nokia Lumia 1020, Apple iPhone 5S and HTC One all vying to offer the best shots on smartphones; on the other, the Samsung Galaxy Camera, Lytro and GoPro are shaking things up in the camera-specific market.

The camera offers a stripped-down and simple shooting solution - fittingly, then it's about the perfect size, shape and weight for most hands and it's built out of pleasingly-tough stuff.

The rubberised non-slip case, tough-feeling twisty lens and rear LCD all feel built to take the knocks - theQ Camera's makers even recommend threading a chain through the combination viewfinder-and-clip hole to swing from your belt or round your neck.

The simple set of four button controls and a slider also feel well constructed and sit well under the fingers. And it is suitably "fashion-forward" coming in nine different lairy colours.

Forget about your fancy schmancy-autofocus, manual control menus, zoom etc. theQ Camera is ultra-stripped down. Shots are flash on/off, timed or not; focus is set at close, far or infinity; exposure is similarly limited to a day, cloudy or night slider.

Where theQ does get flash is in including an LED ring instead of a simple light. This shows battery status, counts down in segments to a selfie, and gives more evenly spread light than most dazzling compacts or underpowered smartphone flashes.

The only other clever feature, bar the waterproofing, is the instant upload system. The camera comes without wi-fi but does include a slot for a data SIM card.

Click the save button once and your snap's uploaded via your data contract to The Q Lab - an online archive of your shots; click it twice and it's sent on to Twitter, Tumblr, Facebook etc.

Amazingly, Instagram, which this camera is surely built for the users of, isn't on the list of approved social networks yet. When your snaps hit the Lab, then you also get a set of filters (nine, currently) to apply.

The 2.7-inch display is a mere 320x240 and there's no proper viewfinder to speak of. So, while the screen is plenty good enough to get the shot done in all light conditions, it's not good enough to see if you've got any grain on the image or not. Which is an issue.

The 800mAh battery may be small, but theQ Camera's makers reckon that's good for 200 shots. In testing, it hit that and beyond, as well as charging up fairly quickly after.

That's partly because the screen only comes on when you half-depress the shutter button. Which may save battery, but actually makes lining up and taking shots a bit more of a pain than it needs to be.

If you love the results your smartphone gives you, you'll be fairly happy with theQ Camera. Five megapixels and an f2.4 aperture is still better than most phones' cameras, but not as good as the Nokia Lumia 1020 (f2.2), HTC One (f2.0) or Sony Xperia Z1 (f2.0 also) and the lens is good and wide, without any noticeable fisheye.

Plus, unlike even those phones, there's no appreciable lag between pressing the shutter button and getting the shot.

That said, quite a few of our shots came out grainy or slightly soft initially, although this did improve somewhat with focus and exposure setting experimentation, and wasn't out of keeping with the Instagram-esque colours the shots had either.

Even after the settings were second nature, about a quarter of shots still came out grainy, and there's only so much to be done with a mere five megapixel sensor.

On top of that, the camera noticeably lacks HDR and any video capabilities. That means it's quicker, but not really better than most smartphones, and certainly far under the best modern compacts, particularly when you consider its priced higher than most traditional compacts, such as the nearly-always-exemplary Canon Ixus range.

The simplicity and aesthetics of Instagram in camera form - theQ Camera isn't a quirky, hipster buy like a Lomography camera. It's more a stripped-down, tote-anywhere digital camera to take out while at the pub, on the beach, or at a gig - moments when your smartphone or compact won't do, moments where you need to take a shot fast, don't want to fiddle with settings and don't want to risk a less-rugged gadget.

On that basis, The Q Camera is an admirable idea done largely well. But the graininess to images and the lack of resolution, HDR and video mean that it comes off fairly under-specced compared to rival compact cameras, for the money.