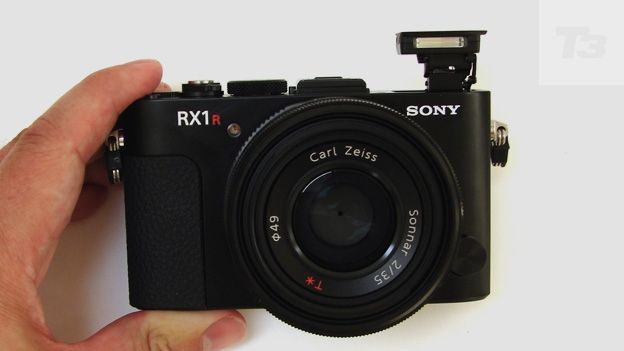 The Sony Cyber-Shot RX1R is an updated version of the the RX1 - the first compact camera to feature a full frame sensor, but is it any good?

This is designed to sit alongside its predecessor. For, unlike most new models, the R iteration isn't so much about what's been added to the camera - which also offers a 24.3 effective megapixel resolution - it's more a case of what's been removed. In this case its optical low pass filter.

This feature is designed to prevent unwanted artefacts such as moiré from ruining images - think of the stripy pattern on a shirt, for example, seeming to vibrate before your eyes - but this can come at the expense of detail.

The removal of this filter also appears to be a bit of industry trend at the moment - particularly where premium-end cameras are concerned. The Nikon D800E DSLR led the way last year and the more recent Nikon D7100 has followed suit.

You may have gathered by now that this Sony is a professional's tool first and foremost, and indeed Sony has said that pros may consider the RX1R as a more portable alternative to its range-topping, DSLR-styled Sony A99 SLT format camera.

Given this, perhaps a price tag of £2600 for what is after all, a fixed lens compact camera, isn't as shocking as it might otherwise be.

And, of course, we still have the main selling point of the RX1R and the RX1 before it: that full-frame sensor, by which we mean an internal light gathering chip ape-ing the dimensions of a frame of old 35mm film. Normally this physical size of sensor is only found in bulky DSLRs (and also Sony's A99) costing a couple of grand or above.

So the RX1R, in theory at least, offers pro quality pictures the likes of which commercial photographers selling their images would want.

Its smaller size also makes it adept as a tool for surreptitious street photography too - as does its lens' fixed 35mm focal length. At this price it could be seen as an alternative to the likes of the Fujifilm X20, Fujifilm X100S and also the Leica X2 for this very purpose. But how does the Sony RX1R measure up by itself?

The metal construction, complete with rangefinder-like top plate dials - one for governing exposure in +/- 2EV increments, the other a familiar 11-option shooting mode wheel - ensures the RX1R feels solid and substantial when gripped in the palm.

Even if, out of the box, there is just a leather effect rubber pad that wraps around the side, in doing so providing a thumb rest at the back, to actually hold the camera steady with.

In truth though, your left hand is most likely to come to rest on the lens barrel. Here we have both a choice of aperture settings - from the brightest/fastest maximum of f/2.0 to f/22 - plus focal distance settings running up to infinity.

Turn the focus mode selection dial, which nestles adjacent to the lens, to manual meanwhile, and there is the added ability to use the front focus ring. The camera automatically provides an enlarged version of the scene/subject on the rear LCD to help achieve critical focus. Half squeeze the shutter release button, however, and this jumps back out to reveal the wider shot.

It's worth noting that there is no optical or electronic viewfinder provided here, though the vacant hotshoe does allow the purchase of an electronic viewfinder for an additional £380, should any user so wish, which feels a tad steep. A flash, stereo microphone and 49mm filter adapter are other optional accessories for the RX1R.

The top plate controls are both stiff to the touch and chunky with it; so no chance of inadvertently slipping onto a setting we didn't want when fetching the camera in and out of a bag.

The on/off lever is equally large, and here encircles the raised shutter release button that is almost industrial looking thanks to its screw thread, allowing for the attachment of an optional cable release. This is not your mass-produced plastic compact, but is clearly built to last.

At the back we get a thumb operated command wheel as we might usually expect to find on a DSLR proper, along with a scroll wheel, menu and delete buttons more familiar from a pocket compact.

Tucked into the side of the backplate thumb rest, where it is almost too easy to overlook it, is a small, dedicated video record button. Press this to instantly begin recording, no matter which shooting mode is selected on the top plate dial.

Though the camera's vacant, covered hot shoe as noted allows for the attachment of a flashgun, there is a built-in flash provided. This is activated by a lever that sits just to the left of the hotshoe, if viewing the camera from the back. Press this and the flash is raised from the body just high enough to prevent the blight of red eye when taking people portraits.

As we've noted there's no viewfinder provided with the RX1R, so we're totally reliant on the rear plate LCD screen for shot composition and review. Sony hasn't yet made this monitor angle adjustable, as it has on cameras in its NEX series plus the RX100 II lower down the R range. Though in fairness it would have added (minor) bulk to what is supposed to be a camera for shooting from the hip.

Luckily then, the image relayed by the 3-inch, very high 1.2 million dot resolution LCD is very sharp and clear, even in sunlight, though of course the best visibility is still to be had when indoors.

As we mentioned earlier, if you're looking to focus manually the camera provides an enlarged section of the image so you can zero in your focus. As a general rule the camera will focus on anything from 30cm to infinity, or from 20cm to 35cm if in macro/close up mode; switching between one and the other involves a simple twist of the camera's lens ring.

Its target market may well wish to invest in the optional EVF too, even if this comes with the bitter pill of another £380 on top of an already sizeable asking price.

One disappointment when it comes to the RX1R, particularly at this price and especially when it is being pitched as good enough for pros, is its 220 shot battery life.

This, in coming from an NP-BX1 lithium ion cell, is no better a performance than a £100 point and shoot compact. It also falls rather short of the 900 pictures offered by a full charge of the batteries in pro DSLRs that could alternatively be bought at this £2,000+ price.

In addition, Sony didn't see fit to provide a standalone mains charger with our review sample. Instead a USB and mains lead combine to enable the battery to be re-charged within the camera. While this keeps down the box weight, it also means that if its target market invests in a spare battery, which they are likely to do, the camera is still tied up every time said battery needs its power replenishing.

Having a fixed focal length lens on the front of your camera - and one that cannot be swapped at that - changes the way you shoot. If you want to fill the frame with a subject you have to walk closer to it, which forces you to engage one-on-one with your subject/s.

Of course this is also how you achieve the most eye-catching and emotive portraiture, so the RX1R is an able tool for that very discipline. Street and travel photographers should get a kick out of it.

Unfortunately we didn't review the RX1R's predecessor in the RX1 so it's impossible for us to say with any certainly whether removing the low pass filter this time around has actually squeezed out any more detail in the shots, but we'd hazard a guess that only an extremely discerning pair of eyes could tell any difference. As it stands the cameras are priced the same anyway.

In terms of video, the specification here is comparable with Sony Cyber-shot compacts costing a fraction of the price, in that the RX1R despite the big money tag still just offers the maximum 1920x1080 pixels at a 50P (progressive) capture rate.

It does, however, have a very nice and bright lens on the front, making it perfect for shallow depth of field effects beloved of modern TV drama. But if you want to manually zoom you're out of luck.

For us it was with these close up, detailed, blurred background shots that the RX1R really excelled. In wider shots while you could tell plenty of detail was there, you couldnít really admire it without zooming in. In addition, on screen alone it's hard to see the difference.

Two-and-a-half-grand is a heck of a lot of money to pay for a fixed-lens compact; so is the RX1R worth it? Well that largely depends on what you're considering on doing with it.

The chief appeal is a 24.2 effective megapixel resolution from a full-frame sensor, coupled with the removal of the optical low pass filter to squeeze out even more detail per frame - the kind of innards, therefore, that you'd normally find in a professional DSLR. But, in the RX1R we have a camera that, unlike a DSLR, would fit in a jacket pocket, so portability is another draw.

Ultimately though, unless you're lucky enough to make money from your photography you're probably much better off with the equally new Sony RX100 II for £650 or the original Sony RX100. Sure you don't get a full-frame sensor, but you do get the closest match for the performance of a DSLR from a fixed-lens compact we've ever encountered. That seems like better value to us.