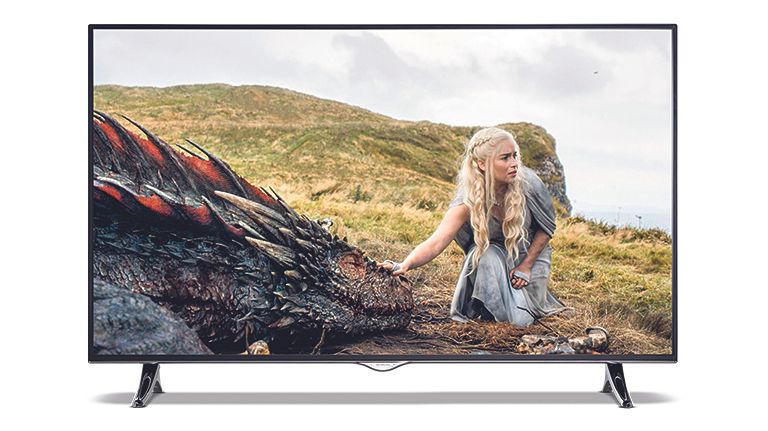 It wasn't long ago that you could expect to pay a hefty price to join the resolution revolution – £4,000 or thereabouts. But as Ultra HD panel technology moves into its third generation, the entry price for a small-screen 4K set is much nearer to £400. That's extraordinary depreciation by any standards.

It was inevitable, of course, as TVs are notorious for shedding value. It's a trait that's proven disastrous for consumer electronics companies (which is why so many have fallen by the wayside), but brilliant news for us buyers. The challenge now is knowing when to jump on board, and deciding what you're prepared to sacrifice in order to keep your Ultra High-Def investment ultra-low.

Currently offering buyers the greatest temptation is cut-price 49-incher the Hitachi 49HGT69U. A cursory glance may well leave you scratching your head. This is a smart-looking TV from a renowned brand, with a spec sheet that a year ago would've had high-end enthusiasts drooling – and yet, you can now pick one up at your local catalogue retail store for £399 or less.

Hitachi used to be a stalwart of the UK TV business, and was an early advocate of plasma. But that quickly turned into a money pit, and the Japanese company all but retreated from the UK consumer-electronics scene. Recently, though, the name has been making a tentative return with high-volume items placed through box-shifting retailers such as Argos.

Design-wise, the 49HGT69U could cut a dash in polite company. It has a mandatory thin black bezel, while the frame glints with a wraparound chrome trim. Two non-adjustable plastic boots keep the panel upright. So far, so ordinary, you might think.

Where the set surprises is in its fine technical detail. Around the back are four HDMI sockets, all of which are HDCP 2.2-compatible. This is a generous bit of forward thinking, as 4K content sources, be they Sky Q, 4K UHD Blu-ray, Amazon Fire or toys yet to be touted, will all require that level of copy protection just to work. By way of contrast, Chinese TV brand Hisense, which covets the same mainstream punters with its K321 4K TV, offers just two HDCP 2.2-ready inputs.

Other connections include three USBs, PC VGA, component and composite inputs, plus SCART via an adaptor (presumably, for tech hipsters still rocking a VCR). There's also an optical digital audio output for use with a soundbar or AV receiver, Ethernet LAN and a subwoofer output. Naturally, there's also onboard Wi-Fi, which is dual-band for 2.4/5GHz juggling.

The remote control is large and clicky, and comes with hot buttons for both YouTube and Netflix.

Set-up is quick and easy, and here's a tip: once you've finished channeltuning, quickly disable the set's Energy Saving mode. It's intended to save you a few pence, but the real cost is a crippling drop in image intensity. This TV is hardly a power hog anyway, drawing just over 100W in use, so even the polar bears won't begrudge you a tad more juice.

Navigation is logical and sprightly. The television employs a vertical menu tree with Picture, Sound, Settings, Installation, Channel List and Media Browser tabs. There's also a Q(uick) menu on the remote control, which is a shortcut to Picture and other settings. In addition to contrast, brightness, colour and sharpness controls, there's a Dynamic Contrast adjustment, which adds extra bite (adjust to taste).

The tuner is vanilla-flavoured Freeview HD, notable for the fact that the programme guide obscures the TV image and mutes audio. Actually finding this EPG could prove a puzzle, as it's accessed by a cryptic screen icon on the bottom-right of the remote.

We've seen some huge advances on the connected-TV front over the past year, with Panasonic's Firefox and LG's webOS introducing welcome levels of sophistication; and then there's the app goliath that is Android's TV OS. These improvements have all largely passed this Hitachi by, and the smarTVue platform employed here looks somewhat dated in comparison. But while the interface is rooted in 2014, this Hitachi still supports 4K streams from Netflix. Also on board are BBC iPlayer, YouTube, BBC News and Sports, Flickr and Viewster. There are apps for Twitter and Facebook (no, you won't use them), some casual games for the kids, plus some obscure European streaming services.

There's also an on-board media player. If your media is stored on a thumbdrive, this set will most likely play it. Locally, the TV can play ball with MKV, MOV, MPEG and WMV video files. Audio formats supported include MP3, WMA and AAC. Sadly, the TV is less adventurous over a network. While the Hitachi immediately recognised both our Plex and Twonky media servers, it didn't want anything to do with our stash of MKVs.

The high end of the 4K TV market is now dominated by talk of HDR (High Dynamic Range) – screens that offer greater contrast and better saturated colours, with specially encoded HDR software. Of course, not all HDR is created equal and, from what we've seen so far, on-screen results vary hugely from set to set. This TV doesn't support HDR at all. Perhaps there's something to be said for simply sitting out the whole nascent HDR scene?

The good news is that pictures look pretty damn good regardless. The set does a grand job with regular HD broadcasts, and gets decidedly cinematic with 1080p Blu-rays. There's no rocket-science upscaling algorithms at work here, but the sheer pixel density of the panel gives images a celluloid sheen. Colours pop and there's a noticeable level of shadow detail lurking in dark scenes.

The panel is edge-lit, but backlight uniformity errors aren't a big deal. There's some light blooming around the frame, but it doesn't tend to intrude on everyday viewing.

Of course, to really see this panel at its best, you'll want to watch native 4K content. Some might argue that a 49-inch TV is too small to show the benefits of Ultra HD resolution, but any time spent with Marco Polo on Netflix in UHD should put paid to such speculation. The level of fine detail resolved is often jaw-dropping.

For real gritty texture, also take a look at Marvel's Jessica Jones. The picture has almost three-dimensional depth (and no, this set doesn't support 3D). One of the real joys of 4K is that you can sit very close to the screen without it getting uncomfortable.

The TV does have some quirks, though. We're given four image presets – Normal, Sports, Dynamic and Natural – but these appear to be little more than randomly assigned labels. For example, you might expect the Cinema mode to be desaturated and dull (most are, after all), but here it looks surprisingly dynamic. Even the usually dreadful Dynamic mode looks good (remember to scale back Dynamic Contrast, though). For no good reason that we could discern, skin tones actually look best on the Game, Sports and Dynamic modes.

Sound-wise, this Hitachi makes a decent enough noise. This appears to be down to some very clever DSP work by DTS. The audio specialist's TruSurround audio processor is key here, plumping out the mid-range. The result is a functional enough listen, and should tide you over until you get a soundbar. Audio modes include User Adjustable, Movie, Speech, Flat and Classic. If you want to add more sonic weight in the meantime, you can take advantage of the subwoofer output. This appears to be a simple low-frequency redirect.

Overall, we rate the Hitachi 49HGT69U as a great budget buy. Typically, the low end of the electronics market is where you'll find unpalatable compromise, but in this case a sensible spec (we appreciate those HDCP 2.2 HDMIs and 4K Netflix streaming), coupled to an intrinsically decent panel, make for a solid money-saving buy. It's official – 4K is now for everyone. Tell your friends.

T3 Slates: There's limited media-file support over the network, it's not HDR-compatible, and smarTVue appears a bit tired.