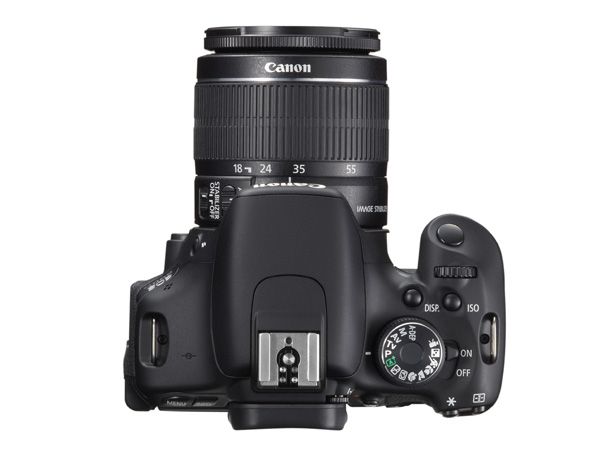 Update: We got our hands on the 600D's successor. Find out what we made of it by reading our Canon 650D review?we've>

The most noticeable difference between the two 18-megapixel APS-C CMOS sensor DSLRs is that the Canon EOS 600D has added on a tilt and swivel LCD screen.

No coincidence, as the next step up, the EOS 60D model, sensibly offers photographers and videographers one too.

The 600D goes directly up against the equally new 16.2 megapixel D5100 from Nikon, also notable for an adjustable LCD. Clearly this is a feature increasingly in demand, and, as we'll discover, a particularly useful one too.

At a manufacturer's suggested £679 body only, the Canon is just £10 more than its Nikon rival.

Beginners should spend £100 more however and get the EF-S 18-55mm f/3.5-5.6 image stabilised zoom we had on test with it, which is a jack-of-all trades starter option in the absence of any body integral anti shake.

Ideally you'd go for the more expansive 18-135mm zoom, likewise offered as a kit bundle with the 600D, but this won't leave much change from a grand.

Screen and provided lens aside, the other thing that immediately strikes you upon handling the 600D is how relatively lightweight, compact and portable this camera is – although it's clearly no pocket option.

At the same time the Canon manages to offer ergonomically chunky controls and a grip of sufficient size to snake three fingers comfortably around, so it sits well in the palm.

For the first time a Feature Guide has been added to the user interface that 'talks' you via text prompts through the camera settings – an explanatory sentence popping up on the LCD with each subsequent twist of the shooting mode dial – so users can pick the 600D up and start shooting without having swotted up via the manual.

Amidst the busy 14 settings on the shooting mode dial that cover the creative regulars of program, aperture priority, shutter priority and manual mode, Canon has highlighted the Scene Intelligent Auto mode in green.

As it sounds, with this option selected the camera itself sets the focus, brightness levels, flash and colour tones according to the subject before the lens – so operation becomes as easy as pointing and shooting.

Of course we've witnessed tilt-able LCDs on bridge cameras and rival DSLRs for a while now, but here its implementation really allow users to make the most of the 600D's Live View functionality (where the 3-inch, 1040k dot resolution LCD can be used as a viewfinder)for shot composition as well as review.

Because you can flip and bend the screen to achieve previously unrealised shooting angles - such as high or low - it proves a distraction from the regular optical viewfinder.

Especially as, if attempting to use the optical viewfinder, your nose squashes up against and smears the screen as you attempt to get an eye level with it.

The 600D's power switch is adjacent to the shooting mode dial. Give the switch a thumb flick to 'on' and the by the time your forefinger has pressed the shutter release button down half way so the 9-point auto focus system can do its stuff, you're ready to shoot. So no frustrating delay here at all.

The camera deploys sensor cleaning upon powering down, rather than powering up, as a further time saver.

For those looking for grain free results in low light, the basic light sensitivity range of ISO100 to 6400 is further expandable to ISO12800.

While that's up there with semi pro DSLRs in terms of performance, it still falls slightly short of the ISO 25,600 offered by the Nikon D5100 - on paper at least.

High speed shooting at 3.7fps is more akin to what we would expect at the entry level, as is the aforementioned auto focus system. Clearly Canon is mindful of demarcation between DSLR models in its range.

Otherwise a full resolution JPEG records to memory in two seconds, and a unprocessed Raw file a fraction of a second longer, although in truth it's hard to notice the difference, which is in itself commendable.

The 600D is therefore as swift and responsive as you'd want a DSLR to be for daily use.

The rechargeable lithium ion cell slotting into the base of the Canon EOS 600D offers up 440 shots.

Obviously if constantly deploying the screen for Live View and video this will suffer proportionally, but in our experience not to a marked degree.

Delivering realistic colour and capable of some lovely shallow depth of field effects, we felt the kit lens could perhaps have been sharper still, and we did experience the occasional clipped highlight, but such grumbles are mere nitpicking on what is a largely excellent camera.

If you are slightly unsatisfied with the result at the time, or simply wish to enhance it further, the 600D offers a range of creative filters that can be applied to pre-captured images.

This selection is largely the same as that offered by Canon compacts. Namely we get the favourites of the tilt and shift lens apeing 'miniature' mode, along with toy camera, which lets user further adjust colour tones between cool and warm.

So fun, effective and dynamic looking results can be achieved with the need to first take an evening class in Photoshop.

With HDMI output offered along with vacant microphone port, Full HD video shooting at 25fps is supplemented with an on-board wind filter for outdoor filming and a couple of interesting capture options.

There's Movie Digital Zoom, which carries out a sensor crop to achieve the illusion your zoom capability is bigger than it is, plus the video diary-alike Video Snapshot function, which can be enabled or disabled via the menus and is again similar to the Movie Digest function offered by Canon's latest generation compacts.

This allows the shooting of two, four or eight second bursts which are combined into one 'movie'.

When zooming in users are faced with the need to adjust focus manually, but to be honest it's usually quicker to do this than wait for the camera to catch up.

Video picture and sound are commendably crisp, though the on-board microphone does inevitably pick up the sound of your fingers making their manual adjustments.

You know that a new digital SLR from Canon or Nikon is not going to be a clunker and that's the case with the 600D: it's another excellent if slightly pricey tool for anyone upgrading from a humble pocket point and shooter.

All most of us want is to take shots that are a fair representation of what the eye can see, albeit within a fixed frame and the 600D delivers that and more.