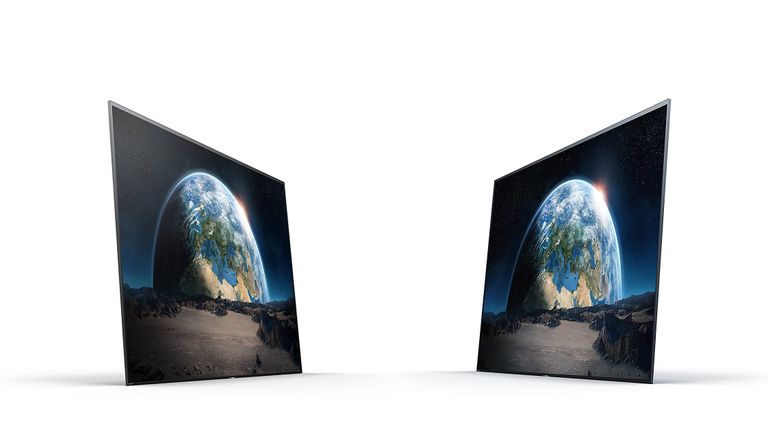 Sony may have originated OLED televisions, but it's LG that's been the main driving force in putting them in living rooms. Admittedly, OLED TV equipped lounges have been a select group up to now, with punters put off by the cost and worries about whether OLED was technologically ready for people other than early adopters. 2018 should be the year that changes. OLED TVs are the best TVs, and you deserve the best, don't you?

We mention LG because we've just come back from seeing their 2018 ranges, including the almighty OLED W8. Panasonic and Sony are also making fantastic OLED TVs, although party pooper Samsung seems to be sticking with its rival QLED tech (which is also excellent, to be fair) for the foreseeable.

The finest OLED TVs from 2017 and 2018 are so good that once seen it’s tough to unsee or accept anything less. Essentially you can get cinema quality in your home, as the filmmakers intended it to be viewed. So you can skip the cinema trips full of noisy popcorn eaters, save that money, and enjoy it in the comfort of home whenever you want. All that and OLED is becoming more affordable than ever too.

So what’s (even) better this year over previous generations?

LG's pricing for 2018 looks to be continuing that trend, with the entry-level C8 listed at $2,500. Using today's exchange rate that would equate to a UK price of about £1,770. Yes, in all likelihood the pricing won't really be that keen in Britain but we may see the UK C8 and B8 squeak under £2,000 at launch.

Other brands will surely feel obliged to follow suit.

In the early years of OLED TV, their image quality was hugely impressive, but talking to manufacturers, it was clear they were wrestling with how to really get the best out of the panels. Their were issues around noise and revealing detail in low-light scenes, for instance, and it was easy to make OLED images look more like awesome laptop screen savers than something truly cinematic.

This also means menu interactions are smooth, voice controls work better than ever using the new ThinQ AI, plus these TVs can even be controlled using a Google Home or Amazon Echo.

4K and HDR are firmly established

Whether you buy an OLED, a QLED, or stick with LCD, one thing is for sure: it'll be 4K resolution. The standards for 4K are now well established – much to the chagrin of those who bought the first wave of UHD tellies, many of which are all but useless now, due to their incompatibility with the way 4K video is now broadcast or streamed.

As well as their being an increasing amount of native 4K content via Sky, Amazon, Netflix et al, the latest 4K ultra-HD sets are also excellent at upscaling full HD, 1080p stuff.

HDR is also now becoming a must-have for movie buffs and lovers of nature shows fronted by octogenarians. This area is still a bit of a mess, with numerous competing versions of HDR vying for supremacy but the good news is that most TV manufacturers are addressing this by offering support for most or all of them. In many cases there's also the ability to add new HDR processing formats via firmware updates.

Atmos is now well established, too

Dolby Atmos is now easily the most recognised and desired form of surround sound, and it's built into all new LG OLED TVs. Given the premium nature of OLED, that's likely to be true for the other big brands' OLED sets as well.

The sound from the actual speakers of OLED sets is generally not on par with the visual delights on offer. However, with Atmos processing built in, you can easily output the all encompassing audio via HDMI to your Atmos speaker system, and let its over-the-head audio charms properly immerse you in your next movie night.

All hail the HFR future (but not yet)

Another handy bit of future proofing to look out for: there is now yet another TV image quality revolution a-comin' and its name is High Frame Rate or HFR (pronounced Huh-furr, like the doctor in The Man With 2 Brains).

HFR, which has been added to LG's 2018 OLEDs, will let you play video at 120 FPS, meaning buttery smooth images that are perfect for watching sports like football or tennis where high speed movements need to be clear. This keeps you pulled into the experience without any lag, making it feel like you’re really there.

HFR is also said to add a new layer of 'realism' to movies. Although anyone who saw The Hobbit films at 48fps will be aware that there is still work to be done on this front.

The current total absence of content for TV viewing is a little bit of an issue, but hopefully the future will bring plenty to enjoy. Annoyingly, YouTube already has 120fps HFR video, but Google currently has it locked so it can only be viewed on a PC or Mac.