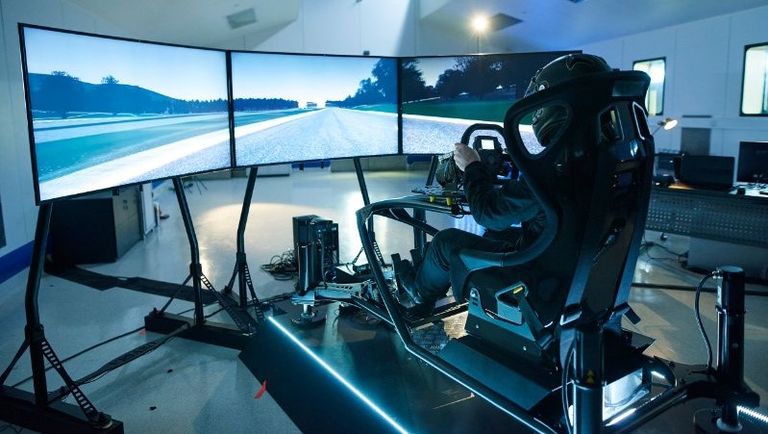 If you love your autosport and have even a passing interest in gaming you'll know the likes of Forza Motorsport 6 or Gran Turismo 6 offer 1:1 recreations of some of the world's most revered and fearsome racing tracks. So with such faithful digital versions in existence, could a professional race driver clock a simulated lap in a racing rig then beat that time on the real-life track?

Man vs Tech: Can we really learn how to drive a racing car by playing a game?

That's the question Castrol EDGE wanted to answer when it flew in Danish Koenigsegg test driver Christoffer Nygaard and British racing star and two times Le Mans winner, Darren Turner to see who could pull of the fastest time at the Ascari Racecourse in Spain. The drivers had to use a special gaming rig set up by racing sim specialist Vesaro (a rig that took three months to create) in partnership with VR firm REWIND.

Nygaard and Turner had to complete 10 virtual sessions at the Titanium Lab in London, which were spliced together to create thier 'Ultimate Lap'. Oh and the cars they were driving? Nygaard had the Koenigsegg One:1 and Turner the track-only Aston Martin Vulcan.

The Vesaro rigs were also were calibrated down to the smallest stat to make them as close to the real-life motor as possible, with everything from aerodynamics and weight to down-force taken into account.

After flexing their driving prowess in the Vesaro, Castrol EDGE flew the two pros out the real-life track and were given keys to those very same cars - a pretty impressive opportunity when you consider the Koenigsegg One: 1 Nygaard was driving was one of only six in the entire world.

So could the two pros beat their simulated ghost? Well, both had a state-of-the-art heads up display set up in front of them so they could track the progress of their virtual self while racing around the track for a real, and while it was a little close at times, both drivers managed to beat their simulated times.

"Every aspect of the car and driver needs to be pushed to the limit when achieving the best lap times," says Aston Martin Test Driver Darren Turner. "When you're racing one of the world's fastest supercars using Castrol EDGE it gives you the confidence you need to push yourself and your machine to the extreme. Beating my best performance by 1.1 seconds gave me an incredible rush."

Why not check out: Now you can take a selfie while on the road with the All-New Citroën C3