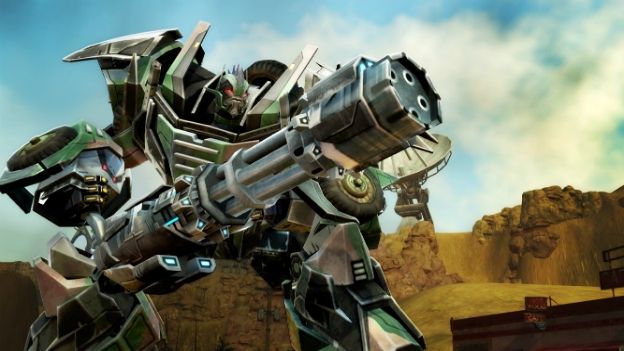 Transformers Universe is running a closed beta event over the weekend giving a select few the chance to get stuck in to some robot-on-robot action.

The beta programme is currently live and is limited to a first come, first served basis so sign up now to get a piece of the action.

To mark the launch of the beta version, developer Jagex has introduced two new transformers to the series.

First up is Front-Line, a big Autobot brawler that's likely to pick up the highest body count.

He's a slugger with an instinct for mayhem that's all about wreaking maximum damage on the enemy.

Armed with a mini-gun, a pair of axes and a hammer, just in case someone really rubs him the wrong way.

You can check out his video below.

Meanwhile Conduit is a Decepticon who is part healer and part killer.

His role is to heal the team and keep them lasting through as many battles as possible – although he's more than capable of handling hostiles.

His weapons include a pair of pistols and a long-range rifle.

Conduit is also capable of shooting directly into the spark chambers of his allies, slowly healing them over time.

You can check out his video below.

Transformers Universe is a massively online tactical action game that sits within the Prime timeline.

It will launch as a free to play game that is supported by microtransactions.

This is the latest attempt to carve out a 'proper' transformers game following a string of unsuccessful titles based on Michael Bay's film series.

Gamers must swear an allegiance to either the noble Autobots or the evil Decepticons, battling as a squad with each player having a key role to play.

Tranformers Universe is tipped to release some time in 2014.