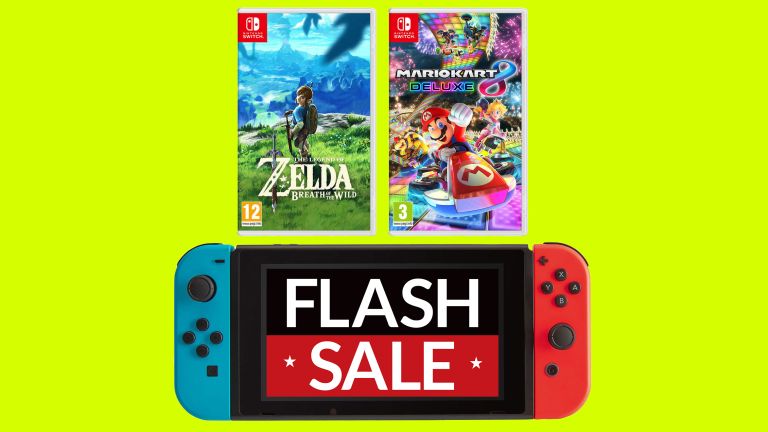 UPDATE: THIS DEAL IS NOW SOLD OUT

We've seen some great Black Friday and Cyber Monday deals on Nintendo Switch, but this is the absolute best we've seen.

You get the Nintendo Switch Neon console along with The Legend of Zelda: Breath of the Wild and Mario Kart 8 for only £299!

There's a limited number, though, and over 400 have already sold as this Nintendo Switch deal is so epic, so you're going to have to move fast to score.

With support for to eight-player multiplayer, and all the DLC from the original Wii U version, Mario Kart 8 Deluxe remains one of Switch's best (and most popular) exclusives. Add in those lovely neon Joy-Cons and a pair of steering wheels and you've got a recipe for some proper racing antics.View Deal

Nintendo Switch | Pokemon Let's Go! Pikachu | Mario Kart 8 | £359.99 at Very
Spend £8 more than the price in the deal above and you can bundle in Mario Kart 8 for your money. That means you get the Nintendo Switch, Pokémon: Let's Go Pikachu edition game, and the incredible fun racer, too. You can bag the same deal with grey controllers instead.View Deal

Nintendo Switch Super Smash Bros. Ultimate Edition Mario Pack | now £339.99 at Nintendo
Now this is a tasty Nintendo Switch Black Friday deal. You get a special edition Switch console, special edition Smash Bros. steelbook, official Switch hard pouch case, a digital edition of Super Smash Bros. Ultimate, and a GameCube-style Nintendo Mario Battle Pad for only £339.99. You get free delivery, too. It is important to note, though, that the game code will only work from December 7, 2018, which is the day of launch.View Deal

Nintendo Switch | now £249 at Amazon
No frills here, but a very competitive price on just the standard Nintendo Switch console. You can pick the system up in Grey or in Neon Red/Blue. £249 right now over at Amazon.View Deal

Nintendo Switch | Super Mario Odyssey | now £299 at Currys (was £319.98)
Super Mario Odyssey received perfect scores from T3 on review and, simply put, it is one of the best video games ever made. This must-play title is now available bundled in with the Switch for £299 over at Currys PCWorld, which is a £20.98 saving over buying them separately.View Deal

Nintendo Switch  | + 1 game | £299.99 at Argos
Argos is currently letting you pick up the Switch and one of Lego Super Heroes 2, Cars 3 or Lego Ninjago for £299.99. You choose the grey console package, too, if that appeals.View Deal

Nintendo Switch | $297.88 at B&H Photo (was $299)
Notes: First, yes, it's just $2 off. Second, it's a 'deal' because retailers have sold out of the standalone console. Third, it's the Gray Switch, but you can (and should) buy Neon Joy-Cons separately for multiplayer.View Deal