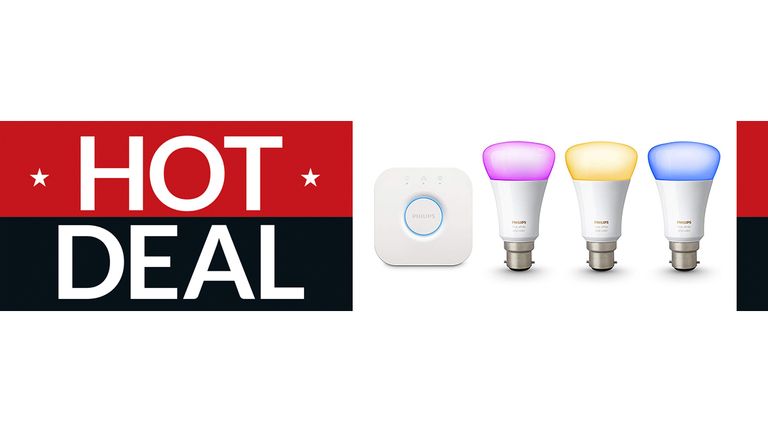 You'd think that decking an entire room out with Philips Hue smart bulbs would be expensive, but take advantage of the various Starter Kits on offer and it can be a lot more economical than one would think – and even more so when they're on sale, just like they are now.

You can now bag the Philips Hue Ambiance B22 Starter Kit, which comes with three white and colour B22 bulbs and a Philips Hue Bridge for £116.99 at Amazon – down £33 from the RRP. That's a lot less than you'd pay for all four items separately, and it's a Black Friday deals beater: the lowest this B22 starter kit has ever been until now was £119.97 so this new price is very attractive.

So before you rush in and add the first Starter Kit you find to your cart, you first need to identify the type of bulb you need. In the UK, we have the choice of three: bayonet, screw or spotlight. As a general rule of thumb, if a Philips Hue has the letter E in its model number, it's a screw-fit. If there's a B, it's bayonet fitting. And if it starts with GU10, it's a spotlight bulb. The first two are suitable for most lamps and freestanding fixtures, while the latter is used for almost exclusively for ceiling lighting.

Philips Hue Ambiance Starter Kit with 3 B22 LED Bulbs | was £149.99 | now £116.99 at Amazon
You won't find a better deal on a Philips Hue Ambiance B22 Starter Kit than this. Designed to fit any standard bayonet light fixture, the three included bulbs are colour-changing and voice-controllable (through Amazon Alexa, Google Assistant and Siri). View Deal

Philips Hue Ambiance Starter Kit with 3 E27 LED Bulbs | was £149.99 | now £126.00 at Amazon
And for folk after a screw-fitting bulb, you won't find a better deal on a Philips Hue Ambiance E27 Starter Kit than this, saving £23.99. Once again, the three included bulbs are colour-changing and voice-controllable (through Amazon Alexa, Google Assistant and Siri). View Deal

So, what makes Philips Hue so special? Well, the Ambiance bulbs on offer are colour-changeable and voice-controllable, and can even be scheduled to turn on and off at certain times. What more could you possibly want from a light bulb? Efficiency? Hue ticks that box, too. After all, they are crammed full of LEDs, which consume minimal power and last for yonks. Heck, Hue is so smart that it can even be configured to shift the warmth of the light depending on the time of day. Pretty neat, huh?