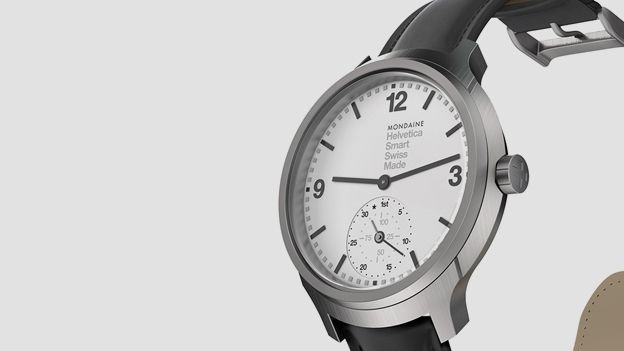 There's no doubt about it, smartwatches are taking over. But the Swiss watch industry is in a bit of a tizzy now Apple is parking its tanks on its lawn...

And now they're fighting back with the Mondaine Helvetica No 1 Smart, the first genuinely Swiss-made smartwatch

But that's where the similarities stop, largely. Unlike the Activité, Mondaine is actually a Swiss watchmaker, with an iconic design heritage inspired by the original Swiss Railway clocks. It features the same design cues as the company's Mondaine Helvetica Bold, with a brushed matte steel case, white dial, sapphire crystal and leather strap.

And here's another fact for you - Apple paid Mondaine 22.5 million Swiss Francs to use its classic watch face design for the original iPhone clock. Despite that dabble into the world of tech, we wouldn't expect a watch company to know much about activity tracking, and sure enough it's bought in third-party tech. The activity and sleep tracking is handled by MotionX, who makes its own medical-class app for the iPhone, with all the data is stored in the MotionX cloud.

This watch is the first of its kind, but more will surely follow. It's the first device that licenses the new quartz module from Manufacture Movements Technologies (MMT), who are now dedicated to making traditional-looking watches with smart skills. The quartz module has a battery life of two years, which easily beats the overnight charge required by most smartwatches we've tested.

The Mondaine Helvetica No 1 Smart will be officially unveiled on February 26, with the first prototype on show at Baselworld at the end of March. It will go on sale in the autumn.