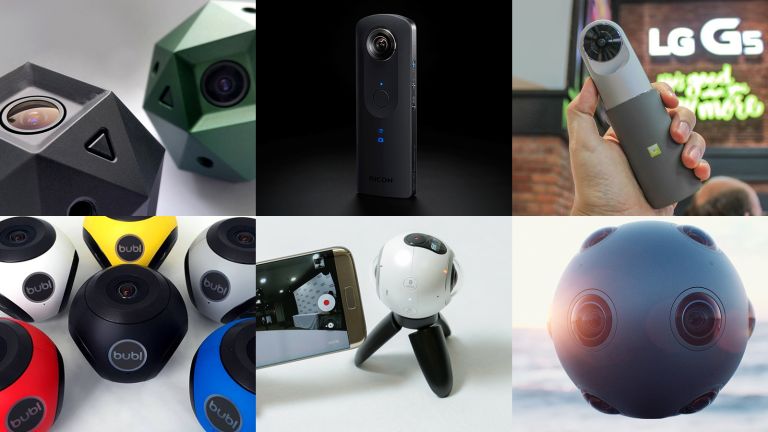 If you've spent much time reading T3 lately then you'll already know that the virtual reality revolution is well and truly upon us: flagship headsets from Oculus, HTC and Sony are all due out this year, while a number of smaller hardware makers are getting involved too.

But what about creating VR content? There are a growing number of 360-degree cameras on the market that let you film in all directions at once, creating movies that can be enjoyed on just about any VR device out there (including the cheapest Google Cardboard ones).

Sphericam is already on its second 360-degree virtual reality camera, so you can be confident there's a certain amount of experience and expertise behind this device: you get 4K recording at 60fps, which means about 85 minutes of recording in one go if you stuff the Sphericam v2 with the maximum number of microSD cards (that's six if you're wondering).

With one-touch recording and wireless streaming on top of that high-resolution, this Kickstarter-ed camera is one of the best consumer options there is - and that's reflected in the price. It's also compact and versatile enough to take anywhere, whether you want to mount it on a tripod or the back of the family pet. [$2,499 (£1,765), Sphericam]

One of the friendliest-looking cameras in our round-up, the Bublcam looks like a kid's toy but packs in plenty of movie-making prowess: you can take 360-degree photos and videos, manage everything through the accompanying smartphone app, and take HDR snaps and timelapse clips too. It's light too, weighing in at 280g, so it can go pretty much anywhere.

You don't get the high-quality resolution of some of its rivals - 360-degree video tops out at 30fps and 1,440 x 1,440 pixels - but you do get everything you need in the package, including a tripod and software to stitch your clips together and share them with the wider world. The integrated microSD card slot can take cards up to 32GB in size. [$799 (£565), Bublcam]

Ricoh was one of the first to dip its toes into the 360-degree movie-making waters and the Theta S is a decent choice if you want to get started as cheaply as possible. It certainly looks stylish enough though the maximum recording resolution is 1,920 x 1,080 pixels at 30fps. It is capable of live-streaming and photo-taking too (including long exposure shots).

The 8GB of integrated memory built into the device gives you about 65 minutes of recording time at the highest video resolution and as you would expect there's a smartphone app to help you organise your footage. If you want something even cheaper and more basic, as well as more colourful, then give the Theta m15 models a look. [£299.99 ($425), Ricoh]

Coming very soon, the Gear 360 was unveiled by Samsung at this year's MWC as it and several other manufacturers look to add VR to their smartphone offerings. The Gear 360 can record 360-degree video at 30fps up to a resolution of 2,560 x 1,440 pixels and can do still photos and timelapse videos too. It weighs in at a mere 153g including the battery.

The emphasis here is on ease of use: you can get everything stitched together using the free smartphone app and then share it with your friends and contacts with a couple of taps. Of course the finished footage works very well with the Gear VR headset and is fully compatible with Street View too. It's coming later in 2016 with pricing to be confirmed. [Samsung]

Next up in the launched-at-MWC-2016-but-yet-to-have-a-price-or-on-sale-date is the LG 360 Cam. LG is going big on accessories this year to go with its flagship LG G5 and this is one of them - a 360-degree camera with dual 13MP lenses, 4GB of internal memory and a small and compact frame (97g) that makes the Gear 360 look a little chunky by comparison.

Samsung has more experience in VR and we can't really judge these two cameras until we have them in to review, but the early signs are promising for LG's offering. It supports 2K video recording (2,560 x 1,440 pixels), though LG doesn't say at what frame rate, and you can expect a release date and final price to filter through from the manufacturer soon. [LG]

Just for fun, here's something at the more professional end of the scale - as you'll notice if you look at the price. This is a cut above the consumer-level cameras and gives you an idea of the extra features the pros use: real-time monitoring and wireless control, live broadcast capabilities, surround sound and an integrated (but replaceable) power and memory pack.

Nokia says its Ozo has been purpose-built from the ground-up for VR (aren't all VR cameras?) and if you do decide to part with your life savings then you get the chance to film in full 360-degree mode at 30fps in 8K resolution. It also works with all the best video editing apps currently on the market to help you polish off your movie. [$60,000 (£42,300), Nokia]