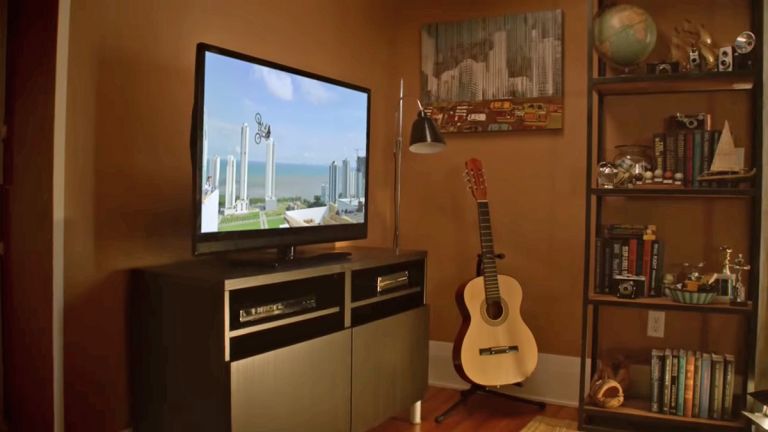 The living room is where you do most of your actual living, when you're not sleeping or eating, so make sure it's fitted out with the tech it deserves - from binge watching movies to entertaining guests, there's a lot of seriously impressive hardware out there to choose from.

After several false starts, the biggest names in technology are now producing gadgets that you'd actually want to use in your living room, pulling in all kinds of audio and video content to enjoy on your big TV screen - so your options are as good as they've ever been.

At long last the Apple TV has been given the upgrade it deserves, and it's scheduled to go on sale very soon after being unveiled last month. With a powerful A8 processor under the hood and a choice of 32GB or 64GB of storage, this is more than just a dumb streaming box - and the support for apps proves it.

As well as getting at all your iTunes content you can run apps such as Netflix and YouTube, in addition to basic mobile games like Crossy Road, and there's a new touch-sensitive, Siri-equipped remote control to play around with too. [Apple, £TBC/$149-$199]

Not to be outdone by its biggest rival, Google has also just upgraded its flagship media streaming device, though the Chromecast is a much simpler affair than the Apple TV (and Google's own Nexus Player). As with the previous edition, the aim is to get your music, movies and photos up on a HDMI-equipped TV with the minimum of fuss.

You use your smartphone (or tablet) as the controller and app selector, but the Chromecast actually pulls the content itself straight from the web, to keep the playback experience as smooth as possible. All the major apps on Android (and many on iOS) are now Chromecast-compatible, and the redesigned little dongle is going from strength to strength. [Google, £30/$35]

Since the Philips Hue lighting range was first launched, plenty of other manufacturers have jumped on the smart lighting bandwagon, but none of them offer quite the range of devices or ease-of-use that Philips does (you can also expand the functionality of these lights through the excellent IFTTT service). Essentially, these web-connected lights offer smartphone control, automated operation and instant colour changes.

That means you can change the mood of your living room with a tap or switch your house lights on or off from the office - you can even get your lights to change in sync with your choice of music. There are several types of bulbs and lamps to pick from so you should be able to find something to suit your living room. [Philips, £7.99+/$16.99+]

Freeview Play is the new version of Freeview about to hit the UK, and simply put it's the usual Freeview experience with internet connectivity added on top - that means all the popular on-demand apps are integrated into your television or a set-top box so you don't need to worry about missing your favourite programmes.

Imagine BBC iPlayer, ITV Player and the other terrestrial channel apps all built into the same interface, with an electronic programming guide to help you find your way around (you may have come across YouView before, which essentially does the same thing as Freeview Play). [Freeview Play, £199.99+]

You probably haven't heard of Savant before, but the high-end luxury tech maker was responsible for kitting out Steve Jobs' private yacht - and that's good enough for us. The company has just jumped into the consumer technology market with an all-seeing, all-doing (and rather expensive) remote control.

It's compatible with hardware from the likes of Apple and Sonos, and there's voice control included as well as a rather elegant touch screen. For your money you also get a smart home hub that's designed to help you manage all the other gadgetry in your house as well. [Savant, £TBC/$500]

When the Amazon Echo first appeared on the scene, there didn't seem a lot of point to this chunky living room speaker that had a limited set of controls and no screen. As time has gone on, and Amazon has added more features, it suddenly looks a lot more interesting - using the integrated Alexa software, the Echo acts as a digital assistant for your lounge.

You can ask it to search the web, read out audiobooks and (of course) order more stuff from Amazon. What's more, it's starting to add integrations with other smart home hardware, such as Samsung's SmartThings platform. It's still only available in the US for now, but that should hopefully change before too long. [Amazon, £TBC/$179.99]

If you want your music to follow you all around the home, including into the living room, then Sonos is the perfect choice (albeit a rather expensive one). You can pick from a range of speakers and your music is streamed from a combination of online services and local tunes stored on the computers in your home.

Everything is controlled intuitively through apps on your mobile devices or your home computers, and the real beauty of the system is just how seamless and effortless it is. It's also possible to set up a special living room zone that plays different music to the rest of the house. [Sonos, £169+/$199+]