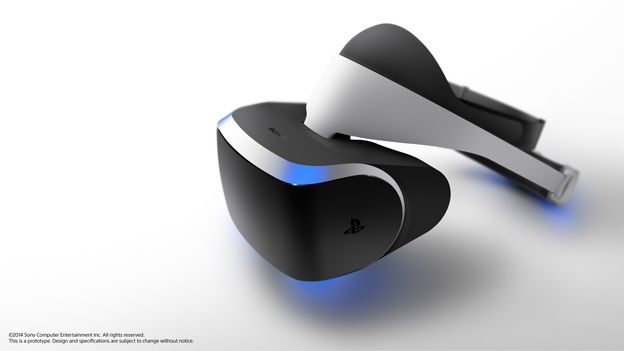 As rumoured, Sony has unveiled an Oculus Rift-style virtual reality headset for the PS4. Named Project Morpheus, it promises to take the console to "the next level of immersion".

Like the Oculus Rift, Project Morpheus lets you step into a virtual world of a game. It has a visor head-mounted display and works with PlayStation Camera to help create these virtual worlds.

As you move your head, the world adjusts so you see what you would if you had been plonked down in it. This headtracking is done using interial sensors.

You can also use the PlayStation Move controller as a sword in some games. Morpheus will show your hands and the sword in the virtual reality world, so you'll feel like you're actually using it to fend off foes.

Project Morpheus uses 3D audio technology developed by Sony. You'll hear stereoscopic sound from all directions, including helicopters flying overhead and footsteps coming up from below. Which will add to the suspense in a game like Resident Evil.

The sounds change in real time as you move your head, too.

Sony showed off Project Morpheus at the Games Developers Conference in San Francisco. T3 magazine editor Matt Hill is there, so expect an eyes-on verdict soon.

"VR has been the dream of creators since video games were invented," said Shuhei Yoshida, president of Sony Computer Entertainment (SCE) Worldwide Studios. "We're looking to go one step further than 'immersion' and deliver 'presence'."

Virtual reality could soon be the norm, and not just for games, according to Sony."VR is pervasive and going to become the preferred medium for many different applications beyond games," said Richard Marks of SCE Research & Development. "We're already working with NASA to create the feeling of walking on Mars but imagine picking up a VR headset and trying out a hotel room before you stay there."

It's crucial to eliminate the motion sickness feeling that has plagued VR so far."VR is a medium, not a peripheral, so needs to be approached on its own terms," said SCE R&D's Anton Mikhailov."Head motion for the player is law – if you mess with that, you make people sick."

Sony admitted this is easier said than done."Control in VR is still very difficult," confirmed Marks, suggesting that a consumer version of the headset is still a way off. "I have a feeling it's something I'm going to be working on for a while."

Sony hasn't set a release date or price for the Project Morpheus yet. It did show off demos including Eve: Valkyrie, which is one of the Oculus Rift's launch titles. It also said the software development kit – which will let developers start making games for it – is in development, and that Sony will "continue development of Morpheus looking towards a future commercial launch".