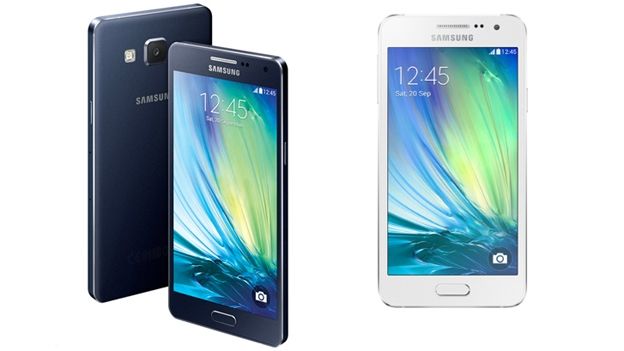 After months of speculation and leaks Samsung has officially announced the Galaxy A5 and Galaxy A3 smartphones. After the disappointing design of the Galaxy S5, which came with a plastic chassis that made the handset feel cheap despite its flagship status and high price, it appears Samsung has upped its design game with the new handsets, giving them a much needed premium feel.

The newly-announced Galaxy A5 comes with a 5-inch display, 1.2GHz quad-core processor, 2GB of RAM and a 15-megapixel rear camera, all housed in an impressively slim 6.7mm full metal body.

The Galaxy A3 is aimed at the lower end of the market and comes with a 4.5-inch screen, 1.2GHz quad-core processor, 1GB RAM and an 8-megapixel rear camera. The A3's body is slightly thicker at 6.9mm and doesn't have metal unibody, though metal is still present in the design, giving the cheaper handset a more premium feel than the more expensive S5.

Both the A4 and the A3 look fantastic, especially the A5 with it's full metal body, and it's made us hopeful that Samsung's improved designs for these handsets will continue with the upcoming Galaxy S6.

Samsung's design for the Galaxy S5 was a disappointment in a number of ways. The Galaxy S line is supposed to be Samsung's flagship series where the best specs and design are combined to create highly desirable handsets.

Including cutting edge hardware in a smartphone inevitably ups the price considerably, so you'd want a premium design befitting a powerful and expensive handset.

The Galaxy S5 certainly didn't disappoint on the specs front, but the uninspiring design and plastic feel of the chassis badly let it down, while Samsung's competitors such as HTC and Sony released their flagship models with superior designs to match.

Samsung has been improving its designs recently, with the Samsung Galaxy Alpha coming with a flat-edged aluminium rim that made the Alpha look premium whilst feeling comfortable to hold. It also showed that Samsung is finally embracing metal in its smartphone designs, something Apple and HTC have been doing for a while.

The fact that Samsung has evolved this design with the new Galaxy A5 and A3 models gives us hope that this will continue with the Samsung S6. The Galaxy A5's full-metal body in particular gives a premium feel that would suit Samsung's next flagship device.

It's a big improvement over the plastic chassis of the S5, so hopefully Samsung will make the S6 look and feel as good as it performs.