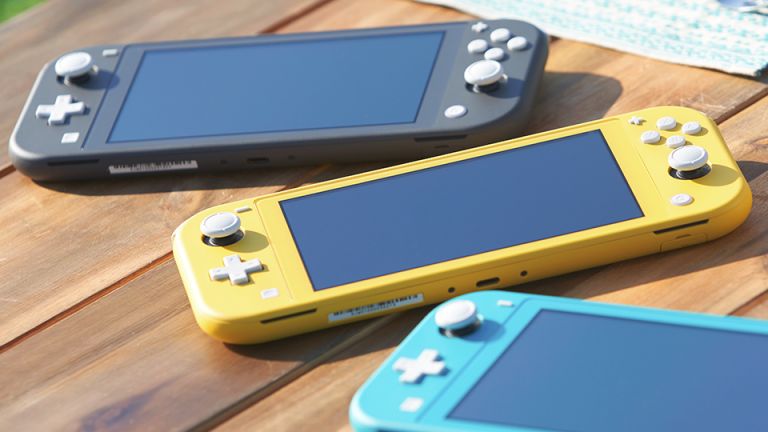 The long-swirling rumours of a more affordable Nintendo Switch that couldn't, well, switch from handheld to TV mode were correct after all.

Nintendo today quietly unveiled a new version of its Switch console, which has proven to be a record-breaking success for the Japanese gaming giant.

Dubbed Switch Lite, Nintendo says its new console is "dedicated to handheld play," which is a really nice way of saying that it doesn't have the trademark detachable controllers and can't be dropped into a dock to beam games onto a HD TV.

Because it integrates the controls into the body of the console, the Nintendo Switch Lite is a smaller package than the the flagship version of Nintendo Switch. It also has a slightly smaller screen than the standard switch-able Switch – 5.5-inches versus the 6.2-inch touchscreen on the original. However, Nintendo has kept the same resolution, so games should look a little sharper on the Switch Lite.

There's no kickstand on the back of the device to be found and, since it is limited to handheld gameplay, won't ship with a dock or HDMI cable in the box. According to the Big N, the new console can play every games in the Switch library that support handheld play, although some titles will have restrictions. For example, titles that need to be played in tabletop mode will require an extra pair of Joy-Con controllers to be wireless connected to the Nintendo Switch Lite.

Switch Lite should have marginally better battery life than the full-size Switch – some 20-30% more, depending on the game – thanks to a more efficient processor. According to Nintendo, you can expect to be able to power through four hours of The Legend of Zelda: Breath of the Wild before you'll need to find a charger, compared to three hours on the original, pricier Nintendo Switch.

Elsewhere, there's also redesigned D-Pad on the left-hand controller, which replaces the four separate buttons found on the standard console. According to Nintendo, the directional button redesign took place because it works better for NES-style retro video games. Before you ask, Nintendo says it has no plans to bring this new design to an updated Joy-Con for the original Nintendo Switch.

However, everything else is pretty much identical. Switch Lite has the same 32GB of built-in storage, a MicroSD card slot for expandable storage, identical volume button layout, a headphone port and USB-C for charging. There's also support for Wi-Fi, NFC, and the Switch Lite can also pair with extra controllers... if you'd rather use the Switch Pro controller to jump and flip around Super Mario Odyssey.

Nintendo Switch Lite launches on September 20 and will be available in three different colours: yellow, grey and turquoise. On November 8, Nintendo will launch two limited edition Switch Lite consoles – one for Zacian, and one for Zamazenta – to celebrate the new Legendary Pokémon in Pokémon Sword and Pokémon Shield.

Switch Lite price in the United States has been announced as $199.99. Unfortunately, there's no word on a UK price yet, but somewhere between £170-£199 seems about right, given how Nintendo's US pricing has translated this side of the pond before.